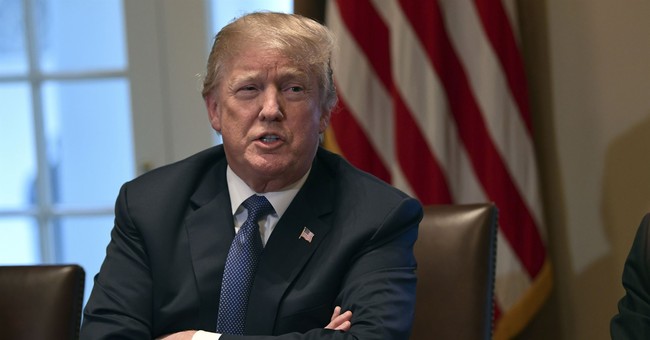 The prediction that President Trump would react to the news of FBI agents storming his personal lawyer's home, office and hotel room with exasperation and anger was a layup.  Sure enough, Trump fired off a few furious tweets this morning, and is reportedly even angrier ("bouncing off walls") in private.  His fulmination about attorney-client privilege being "dead" is a vast overstatement, for reasons we outlined in our post this morning.  Indeed, the president received a Twitter fact check on this legal point from, um, the husband of his campaign manager -- and the woman who's now rumored to be a favorite for the next White House Communications Director.  We live in strange times, friends:

Liberal attorney Alan Dershowitz, who has been an outspoken Trump defender vis-a-vis the Special Counsel investigation, says he thinks this has a whiff of prosecutorial overreach, and that probable cause is too low a bar to justify busting down the doors of a lawyer.  Even if you're disposed to agree with Dershowitz, the relevant standards were in place prior to the Cohen raids -- which gained approval not only from a federal judge, but from the entire DOJ chain of command.  In this case, that chain of command included at least two Trump appointees, including the US Attorney the president picked to replace liberal Preet Bharara, whom Trump fired (update: maybe not).  Oh, and Trump's Deputy Attorney General.  They were all cognizant of the highly sensitive optics, yet they all agreed that the actions against Cohen were justified.  The missing piece, for now, is the "why."

In any case, Trump has now issued his go-to, cryptic "we'll see" reply to questions about whether he's planning to fire Robert Mueller -- whose help in coordinating the Cohen raids (which are at least partially connected to the Stormy Daniels matter) Trump very well may view as a violation of the investigative "red line" he'd laid out.  It looks like Trump was pleased that he was asked that question, too.  If Mueller really is pursuing porn stars and payoffs in an effort to get Trump on something, that would strike me as a problem.  The purpose of the Special Counsel probe is to get to the bottom of Russia's interference in the 2016 election, and straying too far from that essential task -- even if he's technically authorized to do so -- could be seen as an abuse.  In fact, it would lend credence to Trump's "witch hunt" exclamations.  Then again, as I've already indicated, I suspect Mueller has something else in mind, with various clues pointing in all sorts of directions.  How that directly impacts Trump or his presidency is still very much an open question.

So where does all of this leave the president?  As I've been arguing for nearly a year, Mueller has a hard-earned reputation for seriousness and integrity -- and the issue of Russia's 2016 electoral meddling demands a full accounting.  Mueller must be allowed to see his work through to its full conclusion.  The country deserves answers.  Tempted as he may be, due to the possibility that Mueller has strayed beyond his proper lane, the president would commit a hugely self-damaging error if he fires Rod Rosenstein and/or Mueller.  Such a move would look desperate, guilty, and weak.  It would also touch off a conflagration of political fury that would further unite the Left while consuming and dividing Republicans -- a good many of whom would feel compelled denounce the president (enraging a large portion of their own base ahead of already-worrisome elections).  Yesterday's developments are unquestionably significant, but we don't know whether they constitute a crisis for Trump's presidency.  They very well may not.  But sacking Mueller would guarantee a crisis.

One thing that the president absolutely should reconsider, however, is his openness to grant an in-person interview to Mueller and his team.  Last week, it was reported that Trump was leaning strongly toward doing so, perhaps assuaged by apparent assurances that he was not a target of Mueller's probe.  That was a risky path to begin with -- and something that some on his legal team was already counseling him against.  Andrew McCarthy, a former federal prosecutor, was thinking along the same lines:

Even if Trump is utterly convinced that he did not have corrupt intent, how is it in his interest to consent to an interview on this point? It is highly unlikely that the special counsel will ever have a witness, other than Donald Trump, who can fill this hole in the case — someone who can convincingly testify that Trump told him, “Yeah, I had to get rid of Comey because the FBI was closing in on me over that deal I cut with Putin.” Keep in mind: If Mueller had such a witness, he would not have told Trump’s lawyers that Trump is not a target. No, to prove Trump’s state of mind, Mueller needs testimony from Trump. If the president were to tempt fate and provide it, this would be where the expertise of Mueller’s team comes in.

In the context of the last 24 hours or so, it would be very bold, if not reckless, for Trump to sit down with Mueller directly.  That's true even if the president 100 percent convinced of his own innocence in regards to possible Russian 'collusion,' especially because he's not renowned for his careful or considered selection of words.  The events of this week have heightened Trump's wariness of Mueller's intentions, and it looks like he's reconsidering waltzing into a potential perjury or obstruction trap:

In the wake of the FBI raid on Michael Cohen, sources close to Trump and his legal team tell ABC News that Trump is “less inclined” to sit down for an interview with Mueller’s team. https://t.co/fH7tV4eHDr

In the wake of an early morning FBI raid on his personal attorney, sources close to President Donald Trump and his legal team say the president is “less inclined” to sit down for an interview with Special Counsel Robert Mueller’s team. For the last several months, the Trump legal team has been having active negotiations with the Mueller team working toward a potential interview which would have included either a face to face interview with parameters, a written questionnaire or some mix of both, sources have told ABC News. Yet in the wake of Monday’s FBI raid on the home and office of Michael Cohen, the president’s longtime personal counsel, multiple sources tell ABC News things might be changing and that the president per one source is “understandably less trusting” of Mueller and his team.

The targeting of Michael Cohen means that Mueller is playing hardball.  That's not a shot at his integrity or motives, but his aggressive moves must be taken seriously by those surrounding the president.  A written Q&A that can be vetted and carefully considered has always been the more prudent and careful option here.  That reality should now be more obvious than ever.  I'll leave you with this quote: