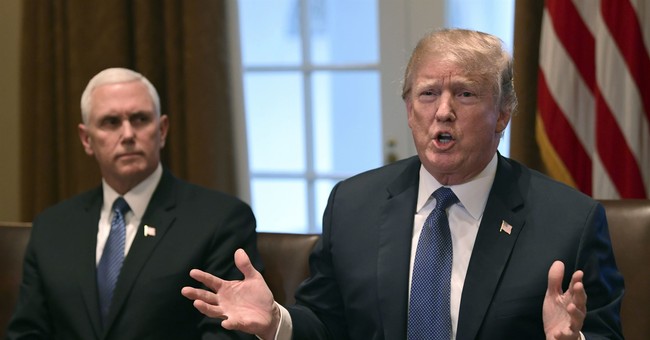 Trump laid into the news of this raid, calling it “an attack against the country,” a “witch-hunt,” and a “disgrace.” As to whether he’ll fire special counsel Robert Mueller, the president said, “we’ll see” (via RCP):

.@POTUS: “Why don’t I just fire Mueller? Well, I think it’s a disgrace, what’s going on. We’ll see what happens...Again, they found nothing.” pic.twitter.com/1z8SMvZFxe

PRESIDENT TRUMP: Why don't I just fire Mueller? Well, I think it's a disgrace what's going on. We'll see what happens. But I think it's really a sad situation, when you look at what happened. And many people have said, you should fire him. Again, they found nothing. And in finding nothing, that's a big statement.

But he signed, as you know, he also signed the FISA warrant. So Rod Rosenstein, who's in charge of this, signed a FISA warrant, and he also -- he also signed a letter that was essentially saying to fire James Comey, and he was right about that. He was absolutely right.

So we'll see what happens. I think it's disgraceful, and so does a lot of other people. This is a pure and simple witch-hunt.

I think most in the president’s inner circle would say “for god’s sake, don’t do it” concerning firing Mueller, which could bring about more headaches with this investigation into whether the Trump campaign colluded with the Russians in 2016. If the Democrats retake the House, you bet there will be hearing after hearing after hearing and possibly impeachment proceedings. Unpredictability is a key characteristic with this White House, which has been both an asset and a detriment. Nevertheless, let’s not forget about Steve Bannon and Rex Tillerson, who served as White House chief strategist and secretary of state respectively. Trump often said, “we’ll see” concerning their future within the administration. Both men were axed.

I like Mr. Bannon; he's a friend of mine. But Mr. Bannon came on very late, you know that," Trump said in a news conference in New York City.

"I like him. He's a good man. He's not a racist, I can tell you that. He's a good person. He actually gets a very unfair press in that regard.

"But we'll see what happens with Mr. Bannon," Trump added. "But he's a good person, and I think the press treats him frankly very unfairly."

Asked in an interview on Fox News's "The Ingraham Angle" whether the secretary of State would remain in Trump's administration for the duration of the president's first term in office, Trump replied: "we'll see."

"We'll see. I don't know who's going to be [at the State Department for the] duration," Trump said, noting that Tillerson is "doing the best he can" as the administration's top diplomat.

I’ll just leave with this. When Trump says, “we’ll see” when it comes to anyone he can dismiss, it more often than not is a sign that this person should probably update their resume. The pink slip is coming. Again, I don’t think Mueller should be fired. And I don’t think Trump will do that, but I will say that the media speculation in this one is not unwarranted. This may be the one time that they’re right to be somewhat on edge and curious about whether Trump would fire the special counsel because in times past, “we’ll see” has been the kiss of death.

So far, Mueller has said the president is not the subject of a criminal investigation.