'This is War:' How Big of a Deal Are the FBI Raids Targeting Trump's Longtime Personal Lawyer? 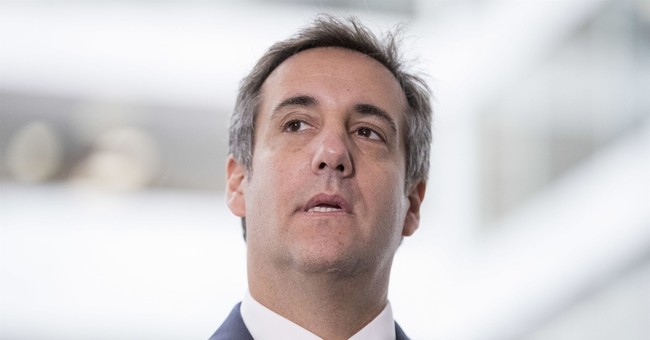 Last week, I explained why Robert Mueller's alleged assurances to President Trump's legal team that Trump is not a target of a criminal investigation was a fairly important development.  I argued that it wasn't sufficiently significant to serve as the basis for any claim that Trump is in the clear, as "subjects" can turn into "targets" rather quickly; it was, however, significant enough to perhaps suggest that the Special Counsel probe was winding down and may not produce any blockbusters.  Then came Monday's bombshell events, which Katie wrote about here.  On its face, the FBI simultaneously raiding the home and office and hotel room of Trump's longtime close confidante and personal attorney seemed like a pretty big deal.  How does one spin this as anything other than a major escalation?

Federal agents on Monday searched the office, home and Manhattan hotel room of President Donald Trump’s longtime lawyer, Michael Cohen, seizing communications between the lawyer and his clients that cover topics including payments to the former porn actress known as Stormy Daniels, according to a person familiar with the matter.  The searches were executed at the direction of the Manhattan U.S. attorney’s office, which has opened an investigation that is being coordinated with the office of special counsel Robert Mueller, this person said...Mr. Mueller’s team has for months asked witnesses about Mr. Cohen’s role during the campaign, according to people familiar with the matter. Their questions have focused on a number of episodes, including his efforts in the early months of Mr. Trump’s presidential campaign to have a Trump Tower built in Moscow.

Once the legal experts started weighing in, the gravity of this development quickly came into clearer focus: This wasn't a marginally big deal, it was a very big deal. A former Assistant US Attorney with a large online following penned an indispensable post laying out the reasons why.  In short, the political implications of these coordinated raids could not have been lost on anybody in the chain of command who signed off on them -- including DOJ brass and a federal judge -- yet a 'probable cause' consensus emerged nonetheless, leading to Monday's FBI operation (emphasis original):

Recently I've been listening to the Podcast "Slow Burn," about Watergate. There's a fascinating theme throughout it: when you're living a historical event, how do you know? How can you tell when a development is a Big Deal? This is a big deal. It's very early on, but here's some things we can already tell...it's not just that the office thought that there was enough for a search warrant. They thought there was enough for a search warrant of an attorney's office for that attorney's client communications. That's a very fraught and extraordinary move that requires multiple levels of authorization within the Department of Justice...

- The feds are only supposed to raid a law firm if less intrusive measures won't work.

- Such a search requires high-level approval. The USAM requires such a search warrant to be approved by the U.S. Attorney — the head of the office, a Presidential appointee [my note: a Trump appointee] — and requires "consultation" with the Criminal Division of the U.S. Department of Justice.

- Such a search requires an elaborate review process. The basic rule is that the government may not deliberately seize, or review, attorney-client communications. The USAM — and relevant caselaw — therefore require the feds to set up a review process.

- A Magistrate Judge signed off on this. Federal magistrate judges (appointed by local district judges, not by the President) review search warrant applications. A Magistrate Judge therefore reviewed this application and found probable cause — that is, probable cause to believe that the subject premises (Cohen's office) contains specified evidence of a specified federal crime.

That's just an excerpt from a longer piece, the link to which crashed intermittently yesterday afternoon and evening due to overwhelming interest and heavy traffic.  Read the whole thing.  Conservative legal writer Gabriel Malor also underscored the importance of the third bullet point in that passage.  It's really hard for authorities to get permission to seize privileged communications between a lawyer and his a client (effectively treating the lawyer as part of a criminal conspiracy), and doing so requires a complex process of an independent committee vetting those communications for the purposes of the investigation.  This situation is very much an exception to standard attorney-client privilege rules, and such exceptions are not granted lightly (content warning, thanks to Malor's colorful language):

Reminder: FBI would have had to convince a judge that an exception applies to get the warrant.

Allahpundit is also surely correct when he reasons that this cannot just be about Stormy Daniels, her payoff, and a potential campaign finance violation. Mueller is very likely trying to flip Cohen, who knows a lot about his client's dirty laundry -- perhaps more so than anyone in the world, including the client himself.  The Special Counsel probably isn't too interested in porn stars, hush money, and FEC infractions.  He is, however, reportedly keenly interested in Cohen's work on behalf of Trump business interests in eastern Europe.  The Wall Street Journal article highlighted above mentioned that angle, and this recent story from McClatchy delves deeper into the same subject.  Meanwhile, former Bush White House spokesman Ari Fleischer, who's read all of the legal eagles' takes, wonders aloud if the feds had a warrant to monitor Cohen's phone calls, too.  Hmmm.  As for the political side of this story, I think Trump-loathing conservative commentator Bill Kristol's analysis on CNN yesterday afternoon sounds correct:

The president's reaction to this will almost assuredly be one of volcanic anger (confirmed and confirmed), perhaps fueling his temptation to fire Mueller to an extent that we haven't previously seen -- including when he was allegedly maneuvering to do just that last summer.  Mueller has a fairly broad charge in his investigation, so he's got the authority to explore virtually any rabbit hole he sees fit.  But he's also a seasoned and professional operator, so he knows full well that straying too far from the central purpose of the probe (Russia's involvement in the 2016 election) would be politically fraught and deeply controversial.  He also knew Monday's moves would trigger an explosive response and a massive firestorm.  Would he have taken those major risks in pursuit of an off-topic fishing expedition?  Perhaps, in which case he's putting his reputation and integrity in grave peril.  But what should trouble Trump allies more than anything today is the likelihood that Mueller has some very specific and compelling reasons for helping to orchestrate the FBI's moves against Cohen.  This detail from Bloomberg strongly suggests that he does:

"Mueller brought info re: Cohen to Deputy Attorney General Rosenstein, who decided that the matter should be handled by the U.S. attorney for the Southern District of New York rather than by Mueller’s team, according to a person familiar with the matter" https://t.co/BMlxA3Pdev

Mueller brought what he had on Cohen to Rod Rosenstein, the highest-ranking DOJ official on this particular totem pole, because Attorney General Jeff Sessions has recused himself.  Rosenstein, a Trump appointee, made the relevant jurisdictional determinations that led to federal agents dramatically swarming into Michael Cohen's life.  If Kristol is right, and Mueller's endgame is drawing near (keep in mind that he must have had some of this in the works when he told White House lawyers that Trump himself wasn't a target of his work), it may not be too long until we have a better idea of just how big of a deal yesterday's news was.  There's no way to pretend that a combination of Mueller and the feds coming hard after Trump's lawyer is anything but worrisome news for Trumpworld.  But it still may not indicate that the president himself is in any legal jeopardy.  Regardless, it looks like the administration's crisis communications strategy in response to the Cohen news will be...haphazard at best:

Briefly reached a WH official. Official said the WH doesn't have a strategy for the Comey book. Paused. Then said that should answer my question of what's the strategy for dealing with Cohen news.