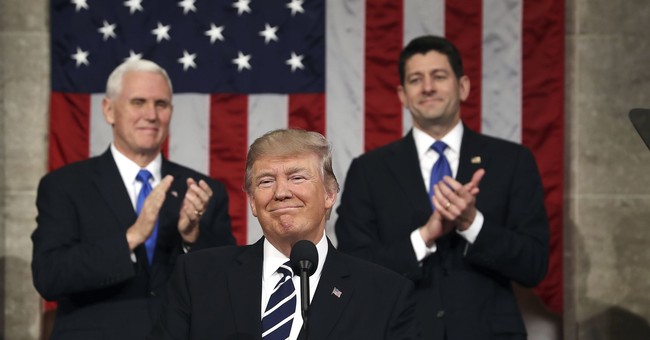 When Congressional Republicans overcame a blizzard of lies and demagoguery to pass historic tax reform in December, the media trotted out a raft of polling demonstrating that most Americans disapproved of the action.  Substantial majorities believed that the law wouldn't help their finances, according to these surveys, with large numbers expecting to be hurt.  Democrats' media-aided talking points had succeeded.  But as we've covered over recent weeks, a funny thing has occurred since late 2017: The law has actually gone into effect, producing waves of positive results that have immediately rebutted the Left's cartoonish hyperventilation; in turn, tax reform's public approval has soared by roughly 20 points.  Even so, much work remains to be done in beating back so much relentless disinformation:

Last 6 weeks, Congressional Leadership Fund surveyed 69 congressional districts. The tax bill is underwater in 52 districts, and in 50, a plurality of voters believe the tax bill will increase their taxes.

Tonight, President Trump faces an invaluable opportunity to help turn the tide even more significantly in favor of his signature domestic accomplishment.  He will speak directly to tens of millions of Americans, many of whom likely still believe -- falsely -- that the new tax law will not benefit them.  Trump should juxtapose the fear-mongering nonsense peddled by the opposition with the real-world outcomes that have since been splashed across front pages, day after day.  He should enthusiastically highlight the great economic news generated by the corporate side of the reform package, from bonuses to millions of American workers, to expanded operations, to job creation, to enhanced employee benefits, to increased wages.  Will Democrats clap for the positive results of a law every single one of them opposed?  Or will they sit awkwardly as Republicans cheer indisputable wins for the US economy and America's workforce?   Examples Trump could draw upon to make his point are cropping up on a near-daily basis, with Exxon Mobil and Honeywell becoming the latest major companies to hop aboard the bandwagon.

But that's only half of the story.  The upsides of corporate reform -- lowering America's uniquely uncompetitive corporate tax rate to near the OECD average -- have become abundantly clear, but a misperception persists among many taxpayers that they won't see their personal tax bills decrease under the new law.  In truth, 80 percent of all Americans will experience a tax cut this year, including 91 percent of middle income earners.  That isn't some concocted right-wing talking point; it's the analysis of the left-leaning Tax Policy Center.  Trump must hammer this point.  In doing so, he doesn't merely need to relay statistics; he should explicitly challenge Americans to contrast the size of their paychecks in the coming weeks (as post-reform withholding tables take effect) to their previous pay stubs.  For the overwhelming majority of taxpayers, this side-by-side comparison will offer both concrete proof of the effective pay raise they've received thanks to the GOP tax law, and concrete proof that Democrats haven't been telling them the truth. For millions, these will come as surprising revelations.  But Republicans shouldn't count on people noticing the chance and automatically connecting it to their law.  That connection must be repeatedly drawn and showcased -- and there's no bigger showcase than the State of the Union address.  I'll leave you with this:

Congressman Joe Kennedy tuesday night must explain voting against a median family of 4 in his district getting a $5841 tax cut.

It would probably be unwise for Trump to 'punch down' at any of the half-dozen or so Democrats slated to give responses to tonight's speech, but it sure would be fun -- and pretty Trumpy -- to see the president demand that the Dems' official rebutter (another Kennedy, natch) explain why he voted against the interests of his constituents.  By the way, I can't vouch for Newt's exact math; I was under the impression that average families' tax cuts would be in the $1,000-$2,000 range (reminder: "the rich" do not disproportionately benefit from the law's tax cuts), but his overall point still stands.  Bonus question: Will Trump engage in some obvious and deserved trolling by mentioning the word "crumbs"?