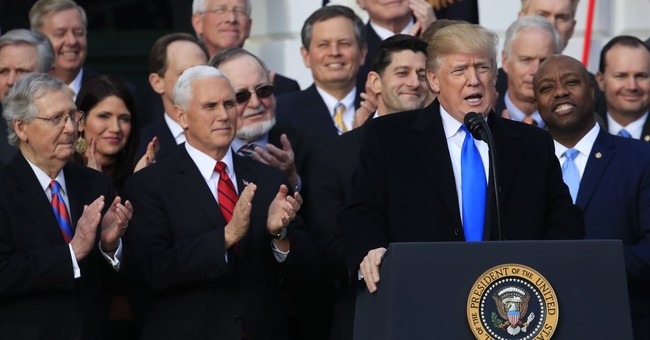 Two recent polls have illustrated how Democrats' hyperbolic overreach in demagoguing the GOP tax plan has backfired in short order.  Since the bill became law, voters have had the unique opportunity to directly and immediately contrast its actual results with the rhetoric employed to by its opponents.  The comparison is not holding up well for Congressional Democrats, every single one of whom voted against the economy-stimulating package of tax cuts for employers and families across all income groups.  An unrelenting campaign of lies and distortions pushed public views of the proposal deep underwater, a gap that has been virtually eliminated over the span of one month.  A pair of surveys from the New York Times and NPR/PBS show tax reform's popularity spiking by roughly 20 percentage points, with support drawing close to even with opposition.

What made those developments even more extraordinary is that majorities of respondents in those polls still don't believe they'll receive a tax reduction, even though 80 percent of them will.  More happy surprises are therefore in store for millions of taxpayers.  The upshot of all of this is that the dramatic turnaround in the numbers has been driven almost entirely by people hearing about instant effects of the law's sorely-needed corporate tax relief -- which Democrats once supported, before reversing positions for political reasons.   Fortunately for beneficiaries and the broader economy, and unfortunately for Democratic talking points, the tax reform law keeps racking up more wins for working Americans.  A real-life bulletin from the magical world of Disney:

Disney announced Tuesday it will pay over 125,000 employees a one-time cash bonus of $1,000, as well as make a new $50 million investment into education program for employees.  "We are directing approximately $125 million to our cast members and employees across the country and making higher education more accessible with the launch of this new program," CEO Bob Iger said in a statement. Disney says both initiatives are due to recent tax reform. The bonus applies any full-time and part-time employees who have been working for Disney since before January 1. Those eligible will receive the bonus in two parts, with one in March and the other in September. Executive level employees are exempt. Disney's education initiative will be available to nearly 88,000 hourly employees in the U.S. "Participants can pursue qualifying higher education or vocational training, including courses unrelated to their current responsibilities at Disney," the company said in a statement.

It's time to add 125,000 more full- and part-time workers to the growing list of Americans directly benefiting from tax reform (beyond their tax cuts), which currently stands well over two million.  Verizon employees are also about to share in the newfound wealth of their company, with stock option bonuses totaling $400 million being paid out to non-executives.  CNBC reports that there's likely more to come: "[Verizon] also hinted in its morning earnings report that "employees will further share in the company's success."  There's more:

JPMorgan Chase will increase wages for its lowest-paid workers and reverse its recent trend of branch closures, it announced on Tuesday, after promising to share the proceeds of the Trump administration’s recent tax cuts. The moves are part of an investment plan which the bank says will be worth $20bn over the next five years, including further commitments to increase its lending to small businesses and create thousands of new jobs. Wages for 22,000 of JPMorgan’s hourly workers will increase from between $12/hour and $16.50/hour to between $15/hour and $18/hour, depending on the local cost of living. The rises will come into force from February 25, with staff gaining an average wage rise of 10 per cent. The company said it will open up to 400 new branches over the next five years, which will directly employ around 3,000 people...In a further sign of the bank’s efforts to show that the benefits of tax reform will not only be felt by the richest, JPMorgan also pledged to increase lending for affordable housing and ramp up its community investments by 50 per cent.

Oh, how awful. Amazingly, desperate liberals on social media are frantically dredging up stories about limited layoffs or previously-announced intentions to expand from these companies.  The goal is to advance the spin that the recent swirl of positive news isn't really flowing from the successful tax reform plan about which they made catastrophically wrong predictions. Good luck with that economic trutherism.  I'll leave you with two reminders.  First, as Matt wrote up earlier in the week, the IMF has lifted its outlook for the global economy thanks to the GOP tax law:

And second, millions of Americans -- including 91 percent of middle income earners -- will start to see increases in their take-home pay starting next month: