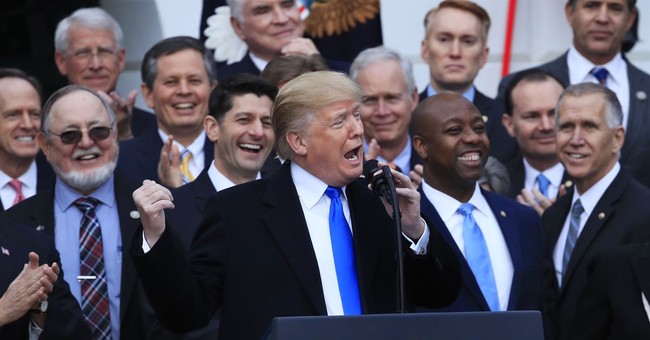 If you're a Republican Trump supporter, the last few months have offered little in the way of positive polling news.  The last few days, however, have offered several glimmers of hope, all of which are linked to the robust economy.  We've been covering the drumbeat of upbeat economic news -- from low unemployment, to widespread optimism, to strong growth, to a booming stock market.  Here's a new piece of the larger puzzle, via the Washington Examiner:

New applications for unemployment insurance benefits plunged by 41,000 to 220,000 in the second week of 2018, the Labor Department reported Thursday, the lowest level in nearly 45 years. The report easily beat forecasters expectations for new jobless claims to drift down to around 250,000. ow jobless claims are a good sign because they suggest that layoffs are relatively scarce. Federal Reserve officials and investors watch the numbers because they come out weekly, providing an early warning sign of any trouble...New claims have scraped multi-decade lows several times in recent years as the jobs recovery steadily reduced the number of unemployed workers throughout the end of President Obama's term and the beginning of President Trump's. The total number of people receiving unemployment benefits, which are available for up to 26 weeks in most states, stayed below 2 million, also near the lowest levels since the 1970s. And at 4.1 percent in December, unemployment is as low as it has been since the dot-com bubble.

The story does note that this report may be an outlier and reflect an artifically low number of unemployment claims, but the trend and overall fundamentals are in very good shape. Is any of this redounding to the president's benefit, or his party's? Perhaps. While it's still historically weak, Trump's average job approval rating has climbed back north of the 40 percent mark for the first time in months:

Relatedly, a new Gallup survey shows that voters are now giving Trump and Obama nearly even portions of credit for the state of the economy.  This is a welcome result for the current administration, given the president's personal unpopularity and the fact that he's been on the job for less than a year.  And many economists agree that the current president deserves significant credit.  Meanwhile, here's another data point to toss into the mix, which confirms a very similar tax reform poll from the New York Times that we highlighted earlier in the week:

NPR/PBS poll: Support for tax law leaps by 21 net points since December, from deep underwater to ~tied. Empirical evidence is having an impact...and that's *before* millions of Americans (including 91% of the middle class) actually see the tax cut many of them don't expect. pic.twitter.com/ABcmzkqt7f

Good news is breaking through, which is unwelcome news for the people who invested so much in painting a cartoonishly dark portrait of the tax bill.  Might voters be having second thoughts about rushing to support a party that just spend months flagrantly lying to them about a bill that's turning out to be a successful law?  Perhaps:

An NPR/PBS NewsHour/Marist poll found that when voters were asked which party’s candidate they’d more likely vote for in their district, 46 percent of registered voters said Democrats, while 40 percent went with Republicans. Nine percent are undecided. That shows a sizable decline from December polling, which found Democrats leading by 13 points on generic ballot polling. Thursday’s poll found more welcome news for Republicans among registered voters who identify as Independents. Among [Independent] voters, Republicans led by 2 points, with 38 percent of those voters saying they’d vote for the GOP candidate, while 36 percent said the Democratic candidate. In December, polling found that Democrats were leading among Independent voters by 11 points.

A few words of caution:  (1) There's a long way to go between now and November, so even a tax reform-caused uptick for the GOP in early 2018 could be wiped away as a distant memory by the spring, let alone the fall. (2) The Marist number is an outlier.  Or is it?