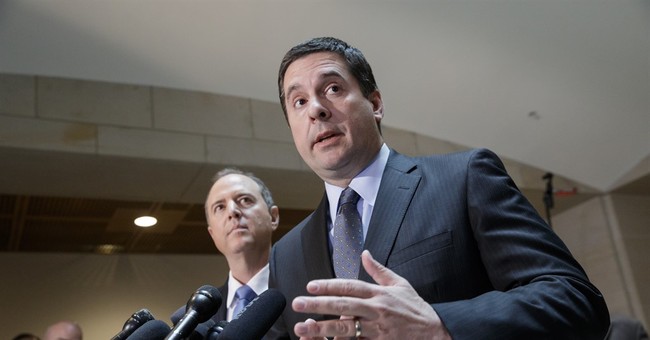 UPDATE -- The Washington Post is out with fresh reporting about the piece of information from the Inspector General's probe that prodded FBI Director Christopher Wray to relieve his deputy, Andrew McCabe, of his duties.  The issue was apparently related to the latter official's role in potentially slow-walking the Bureau's response to developments in its Clinton email investigation (regarding Anthony Weiner's laptop), perhaps with an eye toward running out the clock on the election (which obviously did not end up working out).  As John Sexton notes, that's not the only Clinton-endangering probe McCabe -- whose wife has significant ties to Clintonworld -- has been accused of bogging down.  Another point, on credibility: Liberals instinctively rushed to McCabe's defense when he was ousted yesterday, including former Attorney General Eric Holder.  But what about this?

McCabe was reportedly forced out over yet-undisclosed IG findings, at the behest of Christopher Wray -- whose integrity, independence and professionalism you strongly endorsed when he was nominated for his current job. https://t.co/vPP44IhVhN

ORIGINAL POST -- To recap, the House Intelligence Committee voted along party lines last night to make public a classified memorandum, written by Republicans and drawn from US intelligence, pertaining to some element or elements of the overall Russia matter.  The specific subject matter of the document remains unclear, although the surveillance of former Trump aide Carter Page appears to be at least somewhat relevant. Democrats have objected vociferously to publishing the memo, claiming that it paints an inaccurate picture of reality, based on incomplete information.  They've drafted their own private memo, which the committee voted unanimously to make available to all House members -- but not the public -- last evening.  (For what it's worth, I've come to believe that given the volume and severity of the various charges and counter-charges, both memos should be released, along with as much supporting raw intelligence as possible, with a careful eye toward national security considerations).

Among the criticisms mounted by Democrats in recent days is the accusation that the GOP-authored document isn't factually accurate.  Fox News chief intelligence correspondent Catherine Herridge, who first revealed that FBI Director Christopher Wray viewed the memo on Sunday, is reporting today that several FBI/DOJ sources have now viewed the controversial missive and are not questioning its accuracy:

Two Senior FBI officials have now reviewed the Republican staff memo, alleging abuses of government surveillance programs during the 2016 election, a source familiar with the matter tells Fox News, adding that the officials “could not point to any factual inaccuracies.”

One of the arguments against publishing the memo was that the FBI and DOJ should be given an opportunity to review its contents and raise concerns on factual or national security grounds.  According to Herridge's sources, a number of officials have now been afforded that courtesy, and they're not disputing the core facts presented in the memo.  That doesn't mean that the top brass is now unanimously vouching for its in-context accuracy, or endorsing its conclusions -- nor does it mean that they don't maintain serious qualms about the impact of releasing a document that contains sensitive intelligence.  Nevertheless, 'not inaccurate' is significant.  Here's something else to consider: Are Democrats riled up over the prospect of the Republican memo getting out because it contains objectively embarrassing information about their party's actions throughout this whole confusing saga? Here's Congressman Trey Gowdy, who was reportedly instrumental in pressing to allow the FBI access to the memo prior to the vote on its publication:

My Democratic colleagues didn’t want us to find this information. They did everything they could to keep us from finding this information. I think it will be embarrassing to Adam Schiff once people realize the extent to which he went to keep them from learning any of this. That would be the embarrassment.

Hmm. Meanwhile, the sudden departure of former FBI Deputy Director Andrew McCabe remains a hot topic in town, and as we relayed last night, it appears as though McCabe was forced out after Wray was made aware of a "concerning" detail uncovered in the course of the nonpartisan Inspector General's investigation of how the FBI handled its probe of Hillary Clinton's national security-compromising email scandal. An MSNBC host tweeted that it was difficult to reconcile Wray's erstwhile passionate defenses of McCabe with his very recent decision to oust McCabe from his position:

3 "direct" sources said Wray was SO protective of McCabe that Wray threatened to resign over pressure to oust him.

This doesn't seem like a great mystery to me. Either (a) Wray -- who has a strong bipartisan reputation as a professional, built up over many years -- randomly decided to succumb to Trump's angry griping and pressure for no apparent reason, after doing the exact opposite in private, or (b) Wray learned a pertinent fact that wasn't previously in his posession. I know which option seems much more likely, especially given the New York Times' account of what happened. Alas, there's at least one man who's rushing to McCabe's defense: Wray's controversial predecessor: