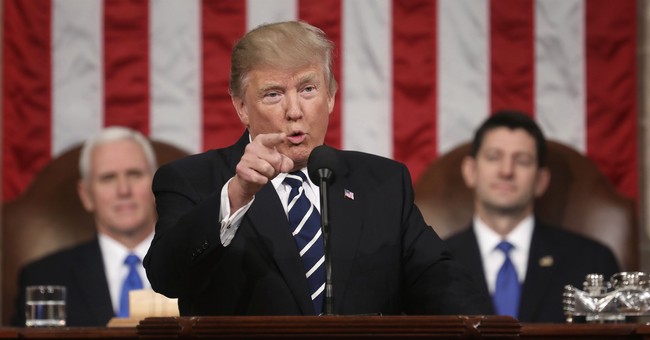 So, how does President Donald Trump feel about the memo alleging egregious FISA abuses? Will he sign off on it? Yes, the House Intelligence Committee could vote to declassify it, but the president has five days whether to block it or not. Assistant Attorney General Stephen Boyd sent Rep. Devin Nunes (R-CA), chair of the House Intelligence Committee, a letter stressing that releasing the memo would harm national security, and that it was a reckless move unless the Department of Justice reviews it. As Wall Street Journal columnist Kimberley Strassel wrote recently, this is nothing more than “operation sabotage the memo.” It’s the DOJ flexing its muscles to get “veto power” over the memo’s release and pressure the president to block it. She added the concurrent narrative from the halls of the FBI/DOJ is that the president would be interfering with the Russia investigation headed by Special Counsel Robert Muller. They’re trying to drop a depth charge. As Strassel noted in a previous column, the FBI seems to be abusing its secrecy powers to prevent its dirty laundry from being aired, like a top counterintelligence agent—Peter Strzok—texting explicit anti-Trump and pro-Hillary texts to bureau lawyer Lisa Page, with whom he was having an extramarital affair—all of this while he was on the Russia probe. The initial counterintelligence investigation concerning whether members of the Trump team colluded with the Russians was signed off by Strzok on in July of 2016. He was also involved in the Hillary email probe. He was taken off the Russia probe by Mueller when he found out about the texts in August of 2017, four months prior to these exchanges being made public. Why the gap regarding disclosure? There was no national security risk, just embarrassing, wholly unprofessional antics by two FBI officials that undercut the credibility of both investigations.

Now, we have a memo detailing FISA abuses, with some lawmakers saying the actions described are akin to that of the Soviet KGB. Democrats are obviously against its release, citing the selective nature of the incidents while adding that the document is a political stunt aimed at undermining the FBI. The nugget some are waiting for was whether the FBI/DOJ, then under the Obama administration, used the unsubstantiated Trump dossier as the basis to secure warrants to spy on the Trump team. Well, over the weekend, The Washington Post reported that President Trump has an answer about the memo: release it:

On Wednesday, as Republicans were clamoring to make public a secret document they think will undercut the investigation into Russian meddling, President Trump made clear his desire: Release the memo.

Trump’s directive was at odds with his own Justice Department, which had warned that releasing the classified memo written by congressional Republicans would be “extraordinarily reckless” without an official review. Nevertheless, White House Chief of Staff John F. Kelly relayed the president’s view to Attorney General Jeff Sessions — although the decision to release the document ultimately lies with Congress.

Kelly and Sessions spoke twice that day — in person during a small-group afternoon meeting and over the phone later that evening — and Kelly conveyed Trump’s desire, a senior administration official said.

Trump and his Republican allies have placed special emphasis on the classified memo, which was written by staff members for House Intelligence Committee Chairman Rep. Devin Nunes (R-Calif.) and suggests that the FBI may have relied on politically motivated or questionable sources to justify its request for a secret surveillance warrant in the investigation’s early phase. Democrats have characterized the memo as misleading talking points designed to smear the FBI. They said it inaccurately summarizes investigative materials that also are classified.

Trump “is inclined to have that released just because it will shed light,” said a senior administration official who was speaking on the condition of anonymity to recount private conversations. “Apparently all the rumors are that it will shed light, it will help the investigators come to a conclusion.”

According to The Hill, White House legislative affairs director Marc Short said, “We don’t know what’s in the memo. It's classified; I haven't seen it. But I think the president generally is on the side of transparency. And so, yes, I think he believes that that should be put out.”

Rep. Trey Gowdy (R-SC) dropped some hints about the memo, but The New York Times reported that one tidbit could be that Deputy Attorney General Rod Rosenstein signed off on extended surveillance warrant of Trump’s foreign policy adviser Carter Page:

The renewal shows that the Justice Department under President Trump saw reason to believe that the associate, Carter Page, was acting as a Russian agent. But the reference to Mr. Rosenstein’s actions in the memo — a much-disputed document that paints the investigation into Russian election meddling as tainted from the start — indicates that Republicans may be moving to seize on his role as they seek to undermine the inquiry.

The memo’s primary contention is that F.B.I. and Justice Department officials failed to adequately explain to an intelligence court judge in initially seeking a warrant for surveillance of Mr. Page that they were relying in part on research by an investigator, Christopher Steele, that had been financed by the Democratic National Committee and Hillary Clinton’s presidential campaign.

To obtain the warrant involving Mr. Page, the government needed to show probable cause that he was acting as an agent of Russia. Once investigators get approval from the Justice Department for a warrant, prosecutors take it to a surveillance court judge, who decides whether to approve it.

Now, Fox News' Catherine Herridge reported that FBI Director Christopher Wray reviewed the memo over the weekend. So, when can we expect a vote on the memo’s release? CNN and now Fox News say it could come as soon as this afternoon/evening:

The House Intelligence Committee could vote as early as Monday evening to publicly release the Republican memo alleging abuses of the Foreign Intelligence Surveillance Act.

The committee, which has posted a business meeting for 5 p.m. ET, has not yet said if it plans to vote Monday to release the memo spearheaded by Chairman Devin Nunes. A vote was expected as soon as this week.

The meeting is scheduled for "consideration of pending committee business and other matters." A committee spokesman did not immediately respond to requests for comment.

Truth be told, the FBI/DOJ already have the information that the investigative committees want to answer their questions. They've been stonewalling them on the Trump dossier and the Strzok-Page texts, so here we are, folks. As Sharyl Attkisson wrote in an op-ed for The Hill, the whole showdown over this memo is the seat of irony, as the FBI/DOJ have the documents that are referenced in the four-page document. Also, a bit odd that the FBI/DOJ says releasing this memo would be reckless, whilst some people are leaking portions of it after Wray reviewed it.

So the same agency that said releasing the memo to the public would damage national security is currently leaking classified details of that memo to the media? Interesting. https://t.co/HDIIaDL996

Sequence of events so far:
-Nunes memo is sent to the FBI for review
-Top FBI official seemingly leaks the memo to the NYT and other MSM outlets
-FBI Dep Dir McCabe resigns
Coincidence?
??https://t.co/vUaZl82VJt