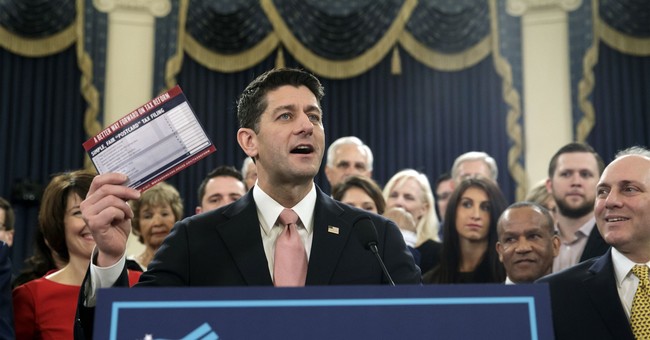 At long last, Republicans have rolled out their detailed tax reform proposal (extensive summary here), which the House Ways and Means Committee will begin marking up next week.  As expected, the package lowers rates for families and businesses, simplifies the code.  According to the GOP's initial numbers, "a typical middle-income family of four, earning $59,000 (the median household income), will receive a $1,182 tax cut."  Democrats have falsely argued that this bill would raise taxes on middle class families, but that claim has been shredded by the Washington Post fact-checker, awarding a popular liberal attack 'Four Pinocchios' for dishonesty:

Only a small percentage (6.5 percent) of the nearly 122 million households in the bottom three quintiles will actually face a tax increase. Meanwhile, more than 97 million (80 percent) will receive a tax cut. Doing the math the same way the JEC staff did, we come up with an average tax cut of about $450 for those 97 million households. Indeed, at the far end of the chart, you will see that every quintile on average receives a tax cut — not a tax increase...In their haste to condemn the GOP tax plan, Democrats have spread far and wide the false claim that families making less than $86,100 on average will face a hefty tax hike. Actually, it’s the opposite. Most families in that income range would get a tax cut. Any Democrat who spread this claim should delete their tweets and make clear they were in error.

Here are few major elements of the just-released plan:

(1) The existing seven income tax brackets are consolidated down to just four (with the top rate, paid by individuals earning $500,000 or more, and married filers earning more than $1 million) unchanged at 39.6 percent.  Many Americans will continue to pay zero income taxes.  The standard deduction would approximately double for individuals and families (to $12,000 and $24,000, respectively), with a slew of credits and deductions getting eliminated.  Modified versions of the charitable deduction, mortgage deduction, and state and local tax deduction  remain intact.  In spite of rumors, tax-free 401k contributions aren't impacted.  Elsewhere, the child tax credit is boosted from $1,000 to $1,600, the estate tax, or death tax, will be phased out and eliminated, and capital gains tax rates are untouched (charts via the Wall Street Journal):

(2) America's corporate tax rate, the highest in the developed world, would come down from 35 percent to a flat 20 percent.  Pass-through corporations, including many small businesses whose owners file taxes as individuals, will see a rate cut to a flat 25 percent.  Republicans say they've created a robust rule to ensure that individuals cannot exploit this lower 'S-corporation' rate by disguising their personal income as business income.  Applied correctly, this provision would help job-creating small businesses to avoid being taxed at the same, high rate as "the rich."  As for "repatriating" corporate profits parked overseas -- a point President Trump mentions frequently -- a "one-time tax on existing profit stockpiles regardless of whether repatriated; 12% on cash; 5% on illiquid assets" would be applied:

And on corporate taxes (again via WSJ): pic.twitter.com/mlBEPepl7w

(3) Simplification is a key component of this proposal, with Republicans contending that under the new, cleaner, less complex system, "an individual or family can file their taxes on a form as simple as a postcard."  This would reduce millions of households' costs associated with preparing and filing taxes each year, on which Americans currently spend tens of billions of dollars (and more than a billion hours) annually.  Overall, there are political risks and pitfalls within this legislation, some of which arise from the GOP's goal of lowering overall rates and simplifying the code without exploding deficits -- even with so-called "dynamic" scoring, which accounts for expected economic growth spurred by reform.  The Journal identifies a few of these "budgetary contortions:"

The tax bill, revised repeatedly in the final days before its release, already bears the marks of political compromises large and small, in addition to budgetary contortions needed to avoid creating larger and long-lasting budget deficits. For example, incentives for business investment lapse after five years and so does a new $300 per person credit for filers, their spouses and non-child dependents such as college students. Those expirations mean the tax cuts would shrink in future years unless Congress acts...There are political land mines scattered in the plan, some easy to see and others that businesses and advocates will likely unearth in the coming days. For example, the proposal repeals an itemized deduction for medical expenses, a crucial provision to households with extraordinary health-care costs. It also repeals the tax credit for adoption and the deduction for student-loan interest. The bill also limits the home mortgage-interest deduction. For new home purchases, interest would be deductible only on loans up to $500,000, down from $1 million today; existing loans would be grandfathered. Because of the larger standard deduction, fewer people would have a tax incentive to make charitable donations.

More critiques are likely to emerge, including a number of frustrations on the Right and in various economic sectors about some provisions. It does appear that some Americans could end up facing higher overall tax bills under this plan, but the vast majority would enjoy a net cut, including the bulk of the middle class.  How will all of that impact national deficits, and can this plan pass the House and satisfy reconciliation requirements in the Senate?  Stay tuned. Democrats will engage in their typical and predictable histrionics about "tax cuts for the rich" (the rich pay disproportionally high taxes already) but this plan is tailored to complicate that stale, inaccurate, knee-jerk messaging.  Mitch McConnell released a statement calling the new package "a big step forward," and President Trump applauded the effort, urging the House to pass the legislation by Thanksgiving. I'll leave you with House Speaker Paul Ryan announcing the GOP bill at an event today, flanked by working and middle class families who stand to benefit from tax reform:

Also, here is CNN's sit-down interview with Speaker Ryan from this afternoon.