Fact Check: Claim That GOP Tax Reform Would 'Raise Taxes on the Middle Class' After 2025 is Misleading 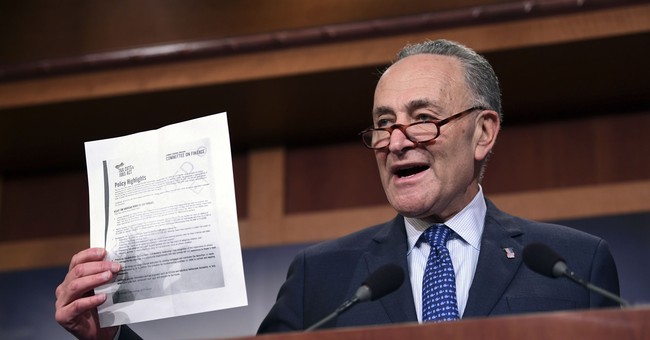 We've written several pieces debunking unfair and inaccurate attacks on Congressional Republicans' reform package of tax cuts and simplification -- from confronting bogus claims about healthcare, to swatting down supposed sweetheart tax breaks for private jet owners, to exposing scare-mongering about fictional middle class tax hikes.  In addition to dispelling false information, we've also tried to highlight bona fide selling points of the proposal, showcasing independent analyses projecting that reform would boost US economic growth and create close to a million new full-time jobs.  Another crucial point is that the fact that those taxpayers who currently take the standard deduction (~70 percent of all filers, a number that will grow substantially) stand to be immediate winners under the bill, as that deduction would approximately double.  Mitch McConnell addressed that element of the plan in a Monday floor speech, which set the stage for a highly-anticipated upper chamber vote in the coming days:

"Our plan doubles the child tax credit, preserves the adoption tax credit, and roughly doubles the standard deduction to reduce how much income is taxed in the first place. Put it all together, and a typical middle-class family of four making the median family income could see a tax break of around $2,200. As families sit around the table to balance their budgets and plan for their future, this money will make a significant impact."

It's worth pausing to acknowledge that it would be wrong for Republicans to adopt the Democrats' approach to Obamacare by lying to the American people about the impacts of their legislation.  The Left mendaciously pretended that there would be no losers under their scheme, which was thoroughly refuted by reality in short order.  It's true that a small percentage of households and taxpayers -- disproportionately high-income itemizers living in high-tax blue states -- will face higher bills under the GOP plan.  But the overwhelming majority will see a tax cut, with multiple nonpartisan reviews determining that on average, every income group would see their tax burden decrease under the House-passed bill.  So what to make of Democrats' go-to line about the Republican plan raising taxes on millions of middle class families in a few years?  This claim (repeated by the press, of course) relies on analyses of the Senate bill, under which the new, flatter, lower individual rates would expire after 2025.  Thus -- on paper, at least -- a large "tax increase" would be scheduled, barring additional Congressional action.

But it's essential to point out that the only way this potential "tax increase" would actually occur is if Democrats force it to.  Republicans would be on board to renew the tax cuts, especially since they're geared toward middle-income households (millionaires' Obama-era marginal tax rate of nearly 40 percent remains untouched under the GOP proposal). Democrats would therefore be the only ones standing in the way of ensuring that those expiration-caused hikes never see the light of day.  If they chose to block the renewal, they would be consigning millions of working families to the sort of tax increases they swear up-and-down that they oppose.  Because of those exact same dynamics, more than 80 percent of the Bush tax cuts were made permanent under President Obama. That's a highly relevant historical data point in this debate.

Remember, the whole reason the Senate bill includes a tax cut sunset clause is to comply with "reconciliation" rules, as required to pass budget-related legislation with a simple majority.  If Democrats truly wanted to give middle-income families permanent stability and certainty on tax rates, they could play ball and not filibuster tax reform.  They could provide the votes to make the new middle class tax cuts permanent, vitiating the need for Republicans to play around with budget windows on procedural grounds.  Instead, they're digging in their heels to oppose the entire Trump agenda (even opposing pro-competitiveness corporate tax cuts they once supported) -- then exploiting the limitations imposed by their own tactics to launch misleading attacks about the Republican bill "raising taxes" after 2025.  That may be cynical (yes, this obviously isn't the broader tax bill they'd prefer, but they've lost a lot of elections), but it's also how politics works.  It's up to the other side to challenge quick, scary soundbytes with facts and context.  I'll leave you with an excerpt from a letter written to the Treasury Secretary by a group of respected economists and academics, which is quoted in a pro-reform Wall Street Journal editorial:

The present debate over tax reforms proposed by President Trump’s administration and embodied in bills that have passed the House of Representatives and the Senate Finance Committee has raised the basic question of whether the bills are “pro-growth”: Would the proposals raise current and future economic activity and generate federal tax revenue that would reduce the “static cost” of the reforms? This letter explains why we believe that the answer to these questions is “yes.”...You have consistently stressed that the objective of tax reform should be to enhance prospects for increased economic growth and household incomes. We agree with this objective, which is consistent with the traditional norms of public finance going back to Adam Smith. We believe that the reforms embodied in the House and Senate Finance bills would achieve this objective. The increased growth, in turn, would lead to greater taxable income and federal tax revenues, which would reduce the static cost of lost federal tax revenue from the reform.

And here's John Thune, a member of the Senate GOP leadership team, predicting on Fox News Sunday that the Senate bill will pass: