Hmm: Now That Conyers is Out, Is Franken Next? 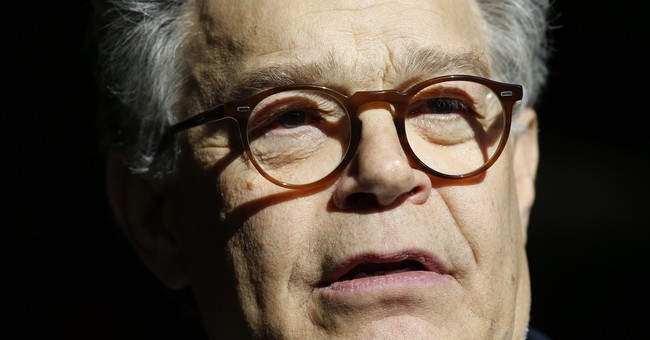 Yesterday, embattled Democratic John Conyers announced his immediate "retirement," after yet another woman accused him of sexually fondling her...in a church, in this case.  This maneuver is generally known as a resignation, although perhaps different rules apply to "icons."  In stepping aside, Conyers opined that his son -- who shares his name and some of his controversial reputation -- should take over the seat.  I feel like I need a shower.  Conyers' political demise raises new questions about whether Senate Democrats will continue to shield Al Franken, whose list of accusers has ballooned to six (update: now seven).  The Minnesota Senator's approval has taken a serious hit among his constituents, and his vague non-denial quasi-apologies seem deliberately calibrated to neither admit to wrongdoing nor accuse the women of lying.  Some of his evasions, such as suggesting that his groping was misinterpreted 'incidental' contact, are downright insulting.  So now what?  Can he continue to just float along and endure?  Or will Senate Democrats decide that he's disposable?  Allahpundit wonders whether Schumer et al might make the political calculation that Democrats purging Conyers and Franken could set themselves up to issue a powerful indictment against Republicans:

Just last week his lawyer was telling anyone who would listen that Conyers wouldn’t be pushed out. Now, lo and behold, he’s been pushed out. How come? The obvious explanation is that Dem leaders are scrambling to unload their baggage before Alabama goes to the polls next week...If Democrats want to maximize their leverage before Alabama, shoving Franken towards the exit is a no-brainer. Like Conyers, he occupies a safe seat so there’s no (immediate) risk of a Republican pick-up. Minnesota’s Democratic governor would appoint a replacement, presumably very quickly so that Franken’s successor would be seated in time to oppose tax reform. Once Franken’s gone Democrats will have hedged their bets for Alabama. Maybe the spectacle of Dems purging their miscreants will goose turnout among liberals in Alabama or give Republicans who dislike Moore more incentives to cross over for Jones. And if not, if Moore wins anyway, then Democrats get to crow that they’re the party that holds their own accountable for mistreating women after, ah, tolerating it for the entire second half of the 20th century from, among other big names, Bill Clinton and pretty much every male named Kennedy. Gotta start somewhere if you’re going to clean up your act, though.

"We've banished our gropers and molesters, but Republicans refuse to do the same," they'll argue, pounding the issue nationally.  It'll draw blood, I'd bet.  And the GOP's response will be...what, exactly? "Bill Clinton and Ted Kennedy"? I've written before that Democrats' hypocrisy on these matters is extraordinary because of their protection of those very figures, but Democrats will tell voters that they're finally holding members of their own party accountable in light of the sweeping #MeToo moment across America, whereas Republicans are tying themselves into knots supporting, semi-excusing, or condemning (but doing nothing about) credibly accused predators or abusers in their midst.  Exploiting GOP infighting over what to do about Roy Moore (expulsion vote? ethics investigation? nothing?) will be political gold for the Left, allowing them to sidestep their own sordid history on this subject -- and it will be a self-inflicted wound by Republicans.

Two complications to that approach, though: First, will Senate Democrats actually act on Franken?  They've done a whole lot of nothing about him so far, including dodging questions and punting on resignation.  And remember, this was the same crew that uniformly declined to say whether they'd promptly expel Bob Menendez if he was convicted for felony bribery (prior to his mistrial, with the ultimate outcome still unclear).  Why? The timing of a conviction may have allowed a Republican Governor to choose a temporary Senator, with key votes looming.  Political considerations prevented them from committing to the obvious ethical call.  Second, is Roy Moore even going to win?  His fortunes have improved dramatically over his mid-scandal nadir, and I'd say he's back to being the favorite.  I'm not sure new information will love the needle much -- people have dug in, and Alabama may be red enough for Moore to survive significant Republican defections.  On the other hand, two recent polls have Democrat Doug Jones on top by a handful of points.  Moore's polling lead in the RCP average is well within the margin of error. On paper, this is still a losable race in a theoretically unlosable state.

I'll leave you with a pair of items, one from each side of the aisle: (1) Republican Blake Farenhold claims that he was "completely exonerated" of wrongdoing after a staffer accused him of sexual harassment, but is now offering to reimburse taxpayers for the $84,000 secret settlement she was paid:

(2) We invoked Ted Kennedy earlier, but here's a jaw-dropping story about his brother, the former president (whose rampant sexual misconduct is no secret):

What? @hbo documentary #TheNewspaperman on #benbradlee just slips in this shocker: Bradlee's wife had told him post-assassination that pal John F. Kennedy had sexually assaulted her, around the time he was having an affair with her murdered sister https://t.co/E9GrKik9gG pic.twitter.com/nB7wpOValH

The man's admiration for Kennedy was untarnished by Kennedy's alleged sexual assault of his own wife?  That's a level of political sycophancy that most people cannot comprehend.  I'm sure his newspaper's coverage of Kennedy's administration various political races was totally impartial, though.