Culture of Corruption: As Trial Goes to Jury, Senate Dems Won't Say if They'd Vote to Expel a Convicted Menendez 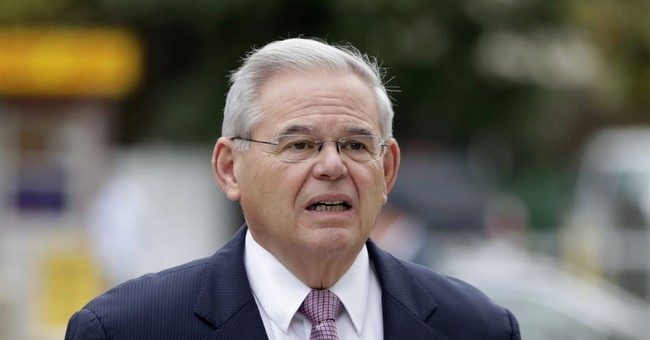 As of yesterday afternoon, the defense rested in the federal corruption trial of New Jersey Democratic Senator Bob Menendez, whose fate is now in the jury's hands.  Menendez has been indicted for effectively selling his office to a major party donor, who prosecutors say showered him with gifts and donations in exchange for interventions on the donor's behalf -- ranging from securing visas for the man's mistresses, to interfering in a massive fraud case for which the man was ultimately sent to prison.  The Garden State Democrat has played the race card in the press, grousing publicly that the proceedings have been a travesty of justice.  Here's how his legal team drew up its closing argument:

Good stuff.  Giving gifts to friends is one thing.  Giving lavish gifts, including the use of a private jet, to a sitting US Senator on whom you lean heavily for official acts and help getting out of serious legal trouble is another.  Menendez's attorneys was dealt blow after blow after blow by the judge over the course of the trial, and now 12 citizens will decide whether the lawmaker is a criminal.  If they decide in the affirmative, will Senate Democrats immediately move to purge a convicted felon from their ranks?  They still won't say.  Quite the quandary -- via Politico:

Dems not looking inclined to immediately expel Menendez from the Senate if he's convicted in federal corruption trial: pic.twitter.com/WQ9lDy128o

With big tax votes potentially on the horizon, Chuck Schumer and friends would likely try to keep Menendez around until after a Democratic Governor is installed in New Jersey.  Assuming Phil Murphy wins tonight, as expected, that would happen in January.  Democrats aren't eager to let outgoing Gov. Chris Christie appoint Menendez's interim replacement.  It will come as a great shock, I'm sure, to learn that Democrats once held a very different standard on this sort of thing:

If Menendez is convicted but refuses to resign, the Senate Ethics Committee should act as quickly as possible to recommend expulsion, and if necessary the full Senate should vote on expulsion. That course of action would be appropriate according to the standard set by the Democratic Senate Caucus itself as recently as 2008, when it issued a press release with the headline: “A Convicted Felon Is Not Going to Be Able to Serve in the United States Senate.” “And as precedent shows us,” Democratic Leader Harry Reid said, a convicted felon senator “will face an ethics committee investigation and expulsion, regardless of his appeals process.” “This is not a partisan issue,” Reid added.

That was when Republican Sen. Ted Stevens was on trial in 2008, which ended in a guilty verdict that wound up getting overturned due to prosecutorial misconduct...after Stevens narrowly lost his re-election bid, helping Democrats achieve a filibuster-proof Senate majority in the process.  All of a sudden, that press release has disappeared from Senate Democrats' website.  Poof:

This was on the Internet for nine years; the Democrats deleted it this week just as the #MenendezTrial went to the jury.https://t.co/r2t25CIJm4

I'll leave you with some words from the man himself, who wants the world to know that he's against tax giveaways to the rich (misleading but predictable Democratic rhetoric).  Based on the US Attorney's case, Menendez prefers his rich people donating to his campaign and feting him with luxurious trips in exchange for influence and favors:

Republicans' proposed tax cuts (mostly for corporations & the top 1%) cost $150 billion a year! Think of the big things we could do w/ that pic.twitter.com/JWzelbMpOH

The stones on this guy -- publicly denouncing a plan to let more people keep more of their own money...while he's on trial for massive corruption.  The jury has now been deliberating for two days, asking only one (strange) question this afternoon.  Stay tuned...