Scandal Effect: Are Republicans in Real Danger of Losing in Alabama? 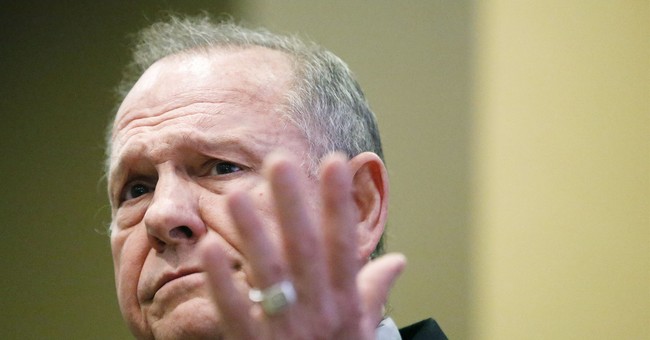 In mid-to-late October, three polls of the Alabama Senate race showed Republican Roy Moore leading Democrat Doug Jones by 17 points, 11 points and 11 points, respectively.  In spite of Moore's long history of controversial views and statements, Alabama is still among the reddest of states -- and Democrats there had foolishly nominated a hardcore leftist and abortion extremist in the race.  And then a scandal exploded.  Amid whispers that Moore had a penchant for dating teenage girls as a thirty-something, the Washington Post identified and interviewed four women who personally (and credibly, in my view) confirmed those rumors.  One of them (a lifelong Republican and Trump voter) says Moore sexually molested her years ago, when he was a 32-year-old prosecutor, and she was just 14.  Moore denies having ever met this accuser, insisting that her claims are false.  On other elements of the Post story, however, he's hedged.  Here, for example, is part of his interview with Sean Hannity on Friday, in which he didn't consistently or explicitly deny that he'd pursued romantic connections with high school-aged girls when he was in his 30's:

Sean Hannity just pressed Roy Moore on whether he dated teenagers when he was in his 30s. Moore said it would be "out of my customary behavior." pic.twitter.com/WDPM5IIu46

Stammering and landing on "out of my customary behavior" did not inspire confidence among some who were inclined to defend Moore -- if they felt reassured that the accusations were baseless.  They weren't:

It's unclear which Republican Senator was on that call, but the timing suggests it may have been Utah's Mike Lee, who withdrew his endorsement around that time (after he'd requested that Moore cease using his name or image in campaign materials). Meanwhile, here's the Moore family's attorney speculating on CNN that the primary accuser -- whom Moore says he's never met at all, remember -- may have been 17, not 14, at the time of the incident that Moore says is a total fabrication.  At the very least, this is profoundly unhelpful messaging:

The lawyer, Trenton Garmon, says the 14-year-old who accused Moore could be lying about her age.
“There is an investigative opportunity out there to find out whether she was 17 or 14.”

As this stuff has swirled and dominated the political news cycle both nationally and in the state, pollsters have been in the field.  One overnight poll we referenced on Friday showed the race had narrowed to a tie.  Then yesterday brought a new survey with Moore trailing Jones by four points.  Another fresh entry is the "remain calm" data point, with Moore up ten.  The RCP average is down to a margin-of-error race.  In Alabama.  Some people are comparing Moore's potential loss to Scott Brown's shocking upset in Massachusetts in early 2010, another electoral precursor to the GOP's midterm romp.  While it's true that the Democrats capturing a Senate seat in one of America's Trumpiest states would cause shockwaves that would compound the anxiety triggered by last week's election results in Virginia, the two scenarios aren't really analogous.  Brown ran on a very specific political message: Stopping Obamacare.  His opponent was weak and hapless, but she wasn't tainted by a giant, burgeoning scandal.  Nobody can seriously argue that Moore losing to Jones would represent Alabamans' repudiation of the GOP; it would be about scandal and the 'ick' factor.

Regardless, losing an uber-safe seat would jeopardize the Republican Senate majority in 2018, which is why the party apparatus is reportedly weighing options to postpone the election and oust Moore from the ballot.  This scheming seems unfair and undemocratic to me.  Why should the GOP be allowed to delay a duly-scheduled election just because they nominated a terribly flawed candidate whose newly-exposed alleged conduct might cause them to lose?  Bad decisions have consequences.  Then again, that's exactly what Democrats did in 2002, violating the rules (with a big assist from the hyper-leftist state supreme court) to replace a tanking, scandal-besieged Senate nominee in New Jersey.  Their unethical hardball worked.  Nevertheless, there's a key difference between that episode and today's Moore dilemma:

The Torricelli maneuver would not have worked if Torricelli refused to quit. Torch was a party hack, not a rebel against the party. https://t.co/bWzOL0B9kz

Bob Torricelli ultimately saluted Democratic bosses and did what the party needed; Moore's campaign, on the other hand, has been largely premised on warring with significant factions of his own party, many members of whom now want him out.  Why look for rule-bending loopholes if the man at the epicenter of the firestorm isn't interested in helping the party win, if that requires him to step aside?  Moore's defenders will ask, why should he be shunted aside if he's innocent?  (This excludes the defenders who don't even pretend to care whether he's innocent of alleged child molestation and sundry creepiness).  If he's innocent, why wouldn't he deny dating high schoolers in a private phone call with a previously-supportive Senator?  And how does he respond to people like this, who used to work with him in the district attorney's office?

Fmr Dep. DA Theresa Jones, who worked alongside Roy Moore, tells CNN: “It was common knowledge that Roy dated high school girls, everyone we knew thought it was weird...We wondered why someone his age would hang out at high school football games and the mall..."

Ask yourself: What are the chances that Moore did pursue high school girls as a grown man in his early-to-mid 30's (which he has not fully denied, and that this former colleague says was common knowledge at the time), but  truly never met the 14-year-old accuser (whose friends, ex-boyfriend, and family members have offered contemporaneous corroboration of her account)?  It's conceivable that some of the Washington Post story is true, but the worst part is not -- but how likely is it?  On that front, I'll leave you with two more additions to my analysis of why I find these women to be credible: First, one supposed "contradiction" being hyped by a right-wing site to discredit Moore's primary accuser is not actually a contradiction.  These sorts of "gotcha" whiffs look like desperate straw-grasping.

Second, a number of people are excitedly noting that one of the other three women turns out to be a Jones supporter who has volunteered as a sign language interpreter for Democrats.  While this should have originally been disclosed by WaPo, (a) the most serious accusation comes from a self-identified Trump supporter, and (b) the partisan Democrat's claims about Moore are quite tepid, by comparison.  "Nothing bad happened," she told the reporters, after they tracked her down.  Allahpundit wonders, if this woman's goal was to bring down Moore with salacious claims for partisan gain, why didn't she concoct a more damaging story?

Gibson’s account of her time with Moore was the least troubling in the WaPo story. She said they dated for two or three months when Moore was 34 and she was 17 and that “he took her to his house, read her poetry and played his guitar. She says he kissed her once in his bedroom and once by the pool at a local country club.” She actually told the paper that “nothing bad happened” and that her mother thought Moore was a catch. If she’s a Democratic plant lying for her party, why wasn’t her lie way more salacious? “I was 12 and he raped me repeatedly,” etc? The fact that one of Moore’s accusers is a Democrat isn’t inherently disqualifying.

I'll leave you with Moore specifically denying engaging in "sexual misconduct" and providing alcohol to a minor. He also asks the "why now?" question, which is a fair one for him to raise -- even if it's not as exculpatory as some might want it to be, given how accusers of high-profile people are often treated, and based on other powerful figures' ability to climb to prominence without previous disqualifying actions hindering their trajectory: