Analysis: Are Roy Moore's Accusers Credible? If So, Then What? 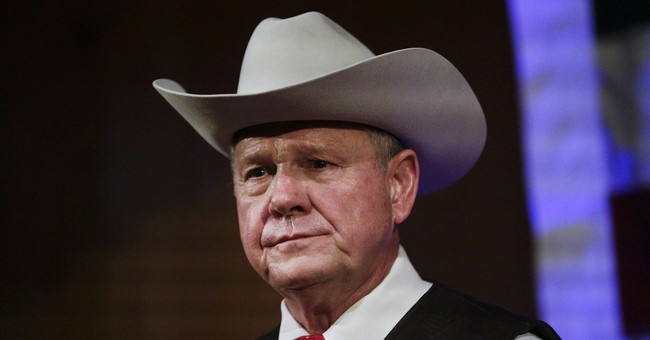 We told you about the controversy roiling Alabama's special election for the US Senate last night, as four women told Washington Post investigative journalists that Republican Roy Moore courted them romantically decades ago -- when they were teenagers, and he was in his thirties.  One of the women, who was 14-years-old at the time, says Moore, then a prosecutor, crossed a sexual line into molestation.  The GOP nominee vehemently denies any wrongdoing, is framing the firestorm as a left-wing media hit job, and has vowed to press forward in the race.  Many fellow Republicans have declared the claims about Moore "troubling," calling on him to step aside if they're true.  Others, including two of the party's former presidential nominees, have said the allegations are credible and disqualifying; the editors of National Review agree.  As Twitchy highlighted earlier, my thoughts on this situation are a bit complex -- and are admittedly somewhat colored by my pre-existing revulsion at Moore.

On one hand, I do have very real concerns about feeding a pattern under which "serious allegations" can in and of themselves destroy a political candidacy, or even a life.  People are falsely accused of terrible things by people with an axe to grind, or with an agenda to further.  The Duke lacrosse rape hoax comes to mind, as does the Rolling Stone libel of UVA fraternity members.  In the political realm, I recall the terrible episode in which bogus sexual harassment charges against an openly gay Republican Congressional candidate in California cost him the race in 2014; after the election, his accuser was forced to admit fabricating "evidence."  So while it is a welcome and healthy societal development that the stigma of victimhood is lifting (as targets of abuse across numerous industries are feeling newly empowered and experiencing strength in numbers), the proverbial dam of silence breaking does not mean that every allegation is true, or equally credible.  We should take each case individually.  In this one, some of the arguments being deployed to question the veracity of Moore's accusers aren't dispositive or even especially compelling.  For instance:

I have deep concerns about false accusations being weaponized to destroy people.

But arguments that allegations against Moore can't be true because they didn't surface sooner prove absolutely nothing.

(Since convicted) pedophile Dennis Hastert rose to Speaker of the House!

Hastert became the most powerful person on Capitol Hill, and third in line for the presidency, with horrible skeletons lurking in his closet.  After he left Washington, he was convicted on charges related to his serial sexual abuse of at least four boys during his days as a high school wrestling coach, which had never emerged during his rise to power.  That doesn't necessarily mean that Moore's accusers are telling the truth, but the notion that claims of prior misconduct must be false because they didn't come out earlier doesn't wash.  As for credibility, here's how I view this situation:

Only a handful of people know for certain if allegations vs. Moore are true. The rest of us need to think critically & decide whether the allegations are *credible.* I understand suspicions about timing & concern that mere accusations can be low bar for political destruction...

...to me, that adds up to credibility. But what's the standard of proof necessary to force Moore out? I can see some using "presumption of innocence" standard as fig leaf, but some AL R's have said on-record they'd support him even if it's all true! That's the grossest reaction.

Allahpundit summarizes the case against Moore very well: "We’re going to have to make a judgment about the truth or falsity of the allegations based on what we know from the Post story. Thirty sources, women on the record, all sought out by the Post rather than vice versa, their accounts corroborated contemporaneously by friends: If your child’s babysitter or Boy Scout troop leader had that sort of evidence against them, would you trust them with your kid?"  Good question.  I know how I'd answer.  Short of physical evidence or a video recording of the alleged events, some people will never believe anything they'd prefer not to believe -- but this is pretty strong, credible evidence.  It's not enough to convict Moore in a court of law, of course, but the standards for a political campaign aren't the same as a criminal trial.  The most disgusting responses to this story are coming from some Republicans who say they'd stand by Moore even if every claim against him were accurate.  'Meh, it was a long time ago and at least he's not a Democrat' is an appalling reaction to alleged child molestation. The Jesus Christ/persecution comparisons and other Biblical allusions are also shameful and embarrassing.

Here's the fundamental question: If this comes down to multiple women credibly saying that Moore inappropriately pursued them romantically or sexually (given the ages involved), with Moore denying it, then what?  There are solid reasons to believe the women, but no outright proof.  Realistically speaking, are serious and credible accusations like this enough to force an elected nominee out of a race?  I'm inclined toward 'yes,' but we just elected a president who was credibly accused by multiple women of sexual harassment, misconduct and assault -- having bragged on tape that he feels entitled to grab women's genitals because he's famous.  We have a former Democratic president whose entire party repeatedly circled the wagons for him, in the face of numerous credible allegations of sexual harassment, misconduct and assault lodged against him over a span of years.  That same party practically worshipped Ted Kennedy -- he of Chappaquiddick and "waitress sandwich" infamy -- as the "liberal lion" of the US Senate throughout his life, and beyond.  Where are their moral lines?  It's also fair to ask whether mainstream media outlets would have devoted similar resources to digging into sexual rumors about a Democratic candidate (how long was Bob Filner preying on women amid persistent whispers before he finally got taken down?)

All that aside, as a thought experiment, why should we believe Bill Clinton's accusers (I generally do), but not Moore's or Trump's?  The reverse question applies to Democrats.  The demoralizing truth seems to be that many partisans, regardless of ideological affiliation, are willing to defend nearly anything in pursuit of power or the furtherance of a political agenda.  Given the state of play, I think this anticipated playbook is more or less correct:

1. Moore's comms right now is "rally around the cross" (the Cross, cross and his, perceived persecution. Expect comparisons to Christ.

6. Their team will evaluate the fallout of the polls. If first impressions are any guess (they usually aren't-- he stays in)

7. They also need to check to see if *any additional* people are coming forward. If that happens, game over.

Many in the GOP are jumping ship, including the NRSC and other Moore allies.  Can the Alabaman survive another potential round of allegations?  And does the calculus shift if additional polls like this (or worse) start to drop?

And by the way, we've seen lots of huffing and puffing from Moore defenders -- table pounding about an anti-Jesus witch hunt, yelling about "the establishment" and the liberal media, etc. -- but has Moore answered any straightforward questions such as: Do you know any of these four women?  Were you ever romantically linked with any of them?  If so, when was that?  There are specific allegations on the table.  Has he confronted any of them with any specificity?  For what it's worth: Moore will be on Hannity tonight.  (Correction: Moore joined Sean Hannity's radio show.  His defenses seem...scattered):

The behavior with the other woman was appropriate, but it didn't happen.