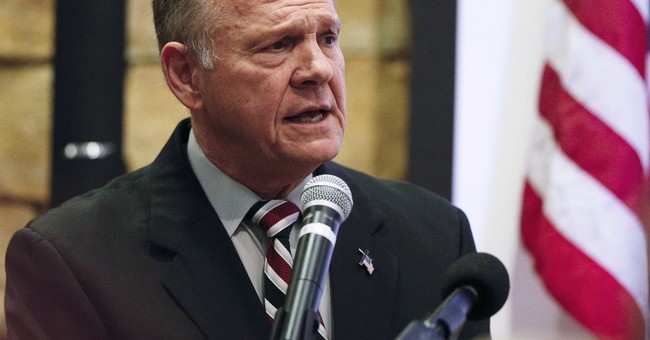 Not really an outlier. The average has this race tied. This pollster's previous poll had Moore up 8, so clear movement. https://t.co/riEZ37dDcM

There’s a new poll coming out today around 11 A.M. on the Alabama Senate race. It comes after a whirlwind week in the special election to decide who will replace Attorney Jeff Sessions’ vacancy. Supposedly, Harry Enten at FiveThirtyEight got wind that it will show Democratic candidate and abortion extremist Doug Jones in the lead. If true, how much? We don’t know, but given the nature of the Alabama electorate, it’ll probably be within the margin of error, or maybe a step of two outside of that. Then again, it could show Jones with a rather solid lead in a deep red state. Either way, many will see the race as tightening. It may be, but I still find it difficult to believe that Republican Roy Moore will lose this election.

As the Hollywood Left’s inner core is exposed as rotten with all of the sexual abuse allegations, one has hit Mr. Moore. Four women accused him of being inappropriate with them while they were teenagers, one has accused the Senate candidate of molesting her when she was fourteen and he was thirty-two. The three other women were sixteen and eighteen at the time.

I can report (unless my sources have failed me) that tomorrow will showcase the first public poll to show Doug Jones with a lead in the AL-Senate race. This race is very real.

Here's another one... 48-46 Moore-Jones... Gravis. One day poll, but you get the idea this race is VERY close right now. https://t.co/rKMsXDFBL5

So, how will this impact the race? Will it sink Moore? Nate Cohn of The New York Times says it’s possible, but doesn’t see any signs to show that Moore is in trouble either. As for the Luther Strange write-in element, Cohn still says that the GOP is favored to win. Strange was the appointed GOP replacement upon Sessions’ resignation; Moore defeated him in the primary. In his interview with Slate, Cohn said, “I think Alabama is basically as tough as it gets for Democrats” (via Slate) [bold text indicates Slate’s questions]

What about the minority turnout in Virginia and what it might portend? More than one-fourth of voters in Alabama are black, and Democrats are absolutely dependent on them turning out.

Black turnout was higher than we expected, but it was by about as much as turnout was up statewide. So there’s not much reason to think that the black share of the electorate was greater than we anticipated, based on turnout by precinct. We entered the elections with fairly low expectations of black turnout in Virginia compared to a presidential election. And in Alabama, as you pointed out, that would be problematic for Democratic chances.

I am going to ask you to speculate, but how much do you think this scandal might affect Moore’s chances to be elected next month?

My honest answer is that I don’t know. Alabama is an extremely conservative state that is deeply polarized along racial lines. Hillary Clinton might not even have received 15 percent of the white vote in Alabama last year. For Doug Jones to win, he might need to double that number. So this is not an easy task at all for the Democrats.

I am certainly open to the possibility that these allegations are enough to be a serious burden on Roy Moore’s chances, especially given that he has already shown some electoral weakness in Alabama in the past. But I don’t see any reason to assume he is in serious jeopardy either.

There has been some talk of a Republican write-in candidate, such as Luther Strange, who lost the Republican primary to Moore. That would make it a three-candidate race. What impact do you think that might have?

That’s also really tough to say. The thing I would want to point out, though, is that Alabama is a state where the Republicans would be favored even in a three-way race with two Republicans and a Democrat. Hillary Clinton received 34 percent of the vote in Alabama. The Democratic path to victory would require the Republicans to split the vote almost evenly. If a Republican had even a modest advantage among the two of them, that would be enough to swamp a 34 percent vote share.

Now Doug Jones is a relatively strong Democratic candidate, and Democratic turnout has been good in recent elections. And the polls have shown Jones in the low 40s, which is considerably better than Hillary Clinton. To the extent that that 41 or 42 percent vote share that polls imply is a result of moderate Republican voters who can’t vote for Roy Moore, then I think he would probably lose a lot of that support to a more typical Republican like Luther Strange. If that’s a reflection of higher Democratic turnout and enthusiasm, which I think is at least possible to some extent, then maybe Doug Jones would keep more of that vote share in a three-way race.

So, there you have it. Even with these new poll results, the favorite is still Moore, even with these allegations. Moore has seen his support among fellow Republicans evaporate, with the National Republican Senatorial Committee nixing their fundraising operations for him as well. Moore has denied the allegations, while refusing to step aside. The special election will be held on December 12.