Hmm: Here's What the NBA is Telling Its Players About Anthem Protests 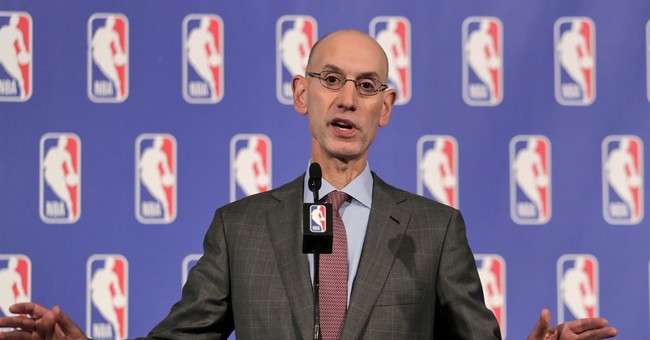 Given the immediate, undeniable, polarizing and still-unfolding fallout suffered by the NFL over the anthem protests controversy, other professional sports leagues are weighing how to handle the issue.  One of the most prominent African Americans in the the National Hockey League's -- and there aren't many -- has announced his stance on the controversy, amid speculation that he may have been considering taking a knee on the ice prior to his games as a member of the San Jose Sharks.  He will not:

"I hold an immense amount of respect for the many players -- across the sporting world -- that have chosen to peacefully bring attention to a couple of big issues in today's society, which are inequality and the use of excessive force against people of color in the United States of America," Ward wrote in his statement. "Make no mistake that racism exists and that people of color are treated differently on a day-to-day basis."...Ward wrote he felt "the original message that was trying to be communicated had been lost," as many have confused kneeling during the anthem as a protest of the flag or military...Ward ended his statement with a call to action. "But now that I have the world's attention, let's meet at the kitchen table, the locker room or in the stands and continue the healing process," he wrote. "Let our collective focus be on bridging the gap between communities -- on working to heal generations of unequal treatment of people of color in the United States of America -- and not turning our backs on that which is hard to face head on."

The NHL told ESPN that unlike the NFL, its league's rules and policies are silent on anthem protocol: "All that is mandated in our bylaws is that the national anthem(s) be played before our games - U.S. if it's a game here between two U.S.-based teams, Canadian if it's in Canada between two Canadian-based teams and both anthems if it is a game in either country between one from each."  The defending Stanley Cup champions decided to move forward with its White House celebration after the NBA's Golden State Warriors effectively elected to boycott.  Speaking of the National Basketball Association, whose biggest stars have been engaged in prominent wars of words with President Trump, its commissioner reportedly released an internal memo addressing this subject:

On the eve of the NBA’s first preseason games, the league office issued a memo to all 30 teams stressing an existing rule requiring personnel to stand for the national anthem and suggesting alternative ways for players to express their political and social views...Silver expressed hope that players would continue to conform, and Friday’s memo reflected that...“I have a concern as an American how divided our country is,” the commissioner said on Thursday. “We don’t live in isolation. We’re a country that faces extraordinarily difficult, complex global issues, and the fact that we’re so divided puts us at a huge disadvantage on the global stage. So in terms of our players and coaches, they have the same rights as all American citizens, and there is freedom of expression in this country. Ultimately, I believe our fans respect that. I don’t think our fans would ultimately want to be part of a system where there were consequences for what you’re describing as, in essence, core political speech. If you look at the origins of the First Amendment, there is probably no more pure speech than that which is political. Again, if they choose to express it, I think what’s important is they do it in a way that is respectful to our fans, respectful to people. They have these alternative platforms in which they can express their point of view,” [he wrote].

I'll leave you with the sports media doing its darndest to spin polling numbers that show clear opposition to athem protests by emphasizing preferred narratives:

If there is a group of journalists that is more notoriously liberal than political journalists, it's sports journalists.