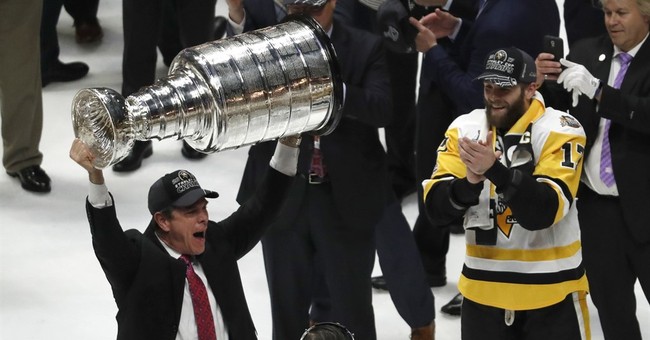 Pittsburgh Penguins Head Coach Mike Sullivan is not thrilled with the controversy surrounding his team's decision to visit the White House in celebration of their Stanley Cup victory. The Penguins, who also visited the White House when they won the Stanley Cup during the George H.W. Bush and Barack Obama eras, issued a statement saying that they are still planning on visiting to celebrate their 2017 victory, saying that they respected the office of the presidency. In response to this, many people, including former players, have criticized the team's decision and accused them of supporting the Trump administration.

Sullivan has had it with these allegations, and said that the team has taken no political stances whatsoever. He said his team "have chosen not to use this platform to take a stance," despite claims of the contrary.

“There appears to be a perception out there that because our organization has made a decision to accept the invitation to the White House that we have taken a stance on the issue, when the reality is it’s just the opposite,” Sullivan said. “We haven’t take any stance. The Penguins as an organization and our players have chosen not to use this platform to take a stance. There appears to be a perception that we have. It’s wrong.”

Further, Sullivan defended Penguins Captain Sidney Crosby, who said that he considered being invited to the White House "an opportunity" and a "great honor" and that he planned on going. In response to this comment, Crosby, a native of Nova Scotia, has been called everything from a racist to a Trump supporter. Sullivan said that it was unfair that Crosby had been singled out and criticized for his opinion, and that he's a "good person."

“Now that we’re on the subject,” Sullivan continued Wednesday, “the fact that people seem to think that ‘Sid’ needs to bear this burden of responsibility is unfair. This guy does nothing but come to the rink, help the Penguins win championships and be a good person every day. That’s how we see it.

“Having said that, we have respect for those that choose to express themselves differently. I wish we would receive the same respect in return. I wish our captain would as well.”

Interestingly enough, the Penguins owner is a Democratic donor who used to work for Bill Clinton.

I agree with Sullivan, and I also think it's not the best idea to question athletes about their stances on controversial issues. If the athlete in question wants to bring it up, that's fine, but let's be honest: there's probably nothing an athlete will say that will make everyone happy (See Matthews, Auston), and all this is going to do is make people mad, regardless of what they answer.

Sidney Crosby has been playing high level hockey since his early teen years, and even cut an advertisement for Reebok about how he basically had no normal life experiences due to how he's devoted his life to the sport. He's not going to be some kind of woke sage who knows how to delicately handle controversial issues. Ironically, Crosby probably didn't want to cause controversy like Bruins' goaltender Tim Thomas did in 2011 when he skipped the White House visit. He wants to play hockey. Let him. If he wants to wander into politics, let him--but for God's sake, don't make him.