NHL Star: I'm Not Going to Kneel During the Anthem 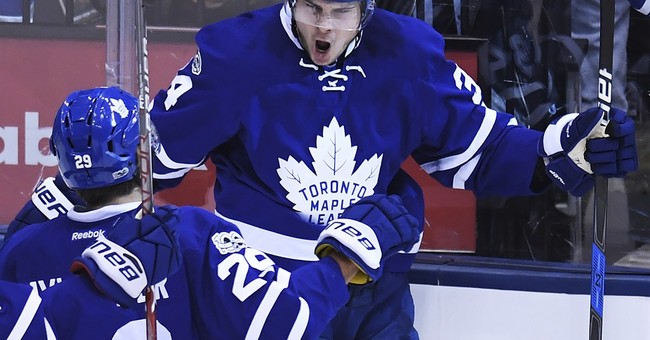 Auston Matthews, who is one of the best American-born hockey players in recent memory, was asked to weigh inon the National Anthem protests happening in other sports. Matthews, who plays for the Toronto Maple Leafs, said that he did not see himself taking a knee during the Star-Spangled Banner, as he believes it is dishonoring the people who fight in the military.

Auston Matthews well-spoken today on political climate in the ????. Supports athletes speaking out, but wouldn't kneel himself during anthem pic.twitter.com/cG1YrW15hw

Matthews did, however, say that he thought it was fine for athletes to speak out, but said he has relatives and friends who served in the military and he did not want to protest. He also said he was open to visiting the White House should the Maple Leafs win the Stanley Cup.

The second-year player, however, still said he supports athletes protesting.

"Isn't that one of the Amendments? You have the right to say what you want."

When asked if he would attend the White House should the Maple Leafs win the Stanley Cup, Matthews said "we'd probably go."

Despite this, Matthews took plenty of heat for his comments, and was called ignorant, among other things.

"hi, yes, I'm a rich, white kid from Arizona, I don't know what those 'other' athletes are thinking" - Auston Matthews, well-spoken

I love Auston Matthews. Half of his statement was off base, and that’s part of the problem. Ignorance is the problem here, not malicious.

Disappointed in him. I Hope someone educates him. It represents the entirety of the country, not a placeholder for the military.

So far, no NHL players have knelt during the National Anthem, although the San Jose Sharks' Joel Ward said he's considering it.

Joel Ward: "I've experienced a lot of racism myself in hockey," may kneel for anthem https://t.co/BIfVfaOztl pic.twitter.com/ISU4ukaBVS