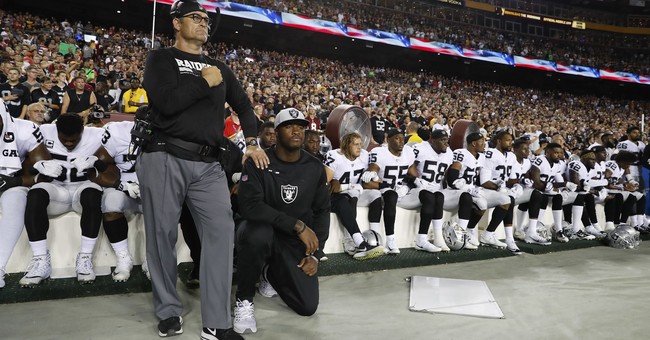 One of the most striking elements of the NFL anthem protest controversy is the glaring disconnect between average Americans -- especially sports fans -- and the media covering the story.  Airwaves and column inches are disproportionately crowded with pro-protest (and anti-Trump) perspectives, whereas most non-elite observers come down on the other side of the issue.  It's reminiscent of the 2016 election dynamic, in which the overwhelming majority of the media was horrified by Donald Trump and convinced he had virtually no chance of winning.  They were unable or unwilling to understand the range of sentiments and motivations that inspired tens of millions of voters to cast ballots for him, so they found themselves morose and scrambling after he won.

Today, we're watching something of a rerun, except the canyon between the press and the people is even wider here.  Setting aside the stipulations that of course peaceful protests are protected speech, that Trump erred in calling for firings, and that issues like police brutality are worthy of serious attention, most Americans do not support using the national anthem as an occasion for protest. We've been following the public opinion polls on these questions over the last few days, and the patterns are clear: Solid majorities oppose anthem kneeling (more than seven-in-ten call it "unpatriotic," according to a CBS survey), and sizable minorities are consuming less of the NFL's product as a result of the brouhaha.  Here are some new numbers, via a polling firm called Remington Research Group, who conducted a scientific national poll of more than 1,600 Americans:

80% of survey respondents would like to see sports and politics less intertwined: pic.twitter.com/opPhjsBjEy

The over-politicization of normally-apolitical aspects of American life is a pet peeve of mine, and it seems I'm far from alone.  Some social justice types have criticized my take, asserting that only "privileged" people who are comfortably ensconced in the status quo feel this way.  That's demonstrably false (see above); I'd argue that the desire to prevent politics from poisoning unifying cultural institutions is a widely-shared, human impulse. I'd also wager that privileged liberals are among the likeliest groups in the country to have the time and energy to foment constant outage over everything.  But back to the data: A lopsided majority also says that players should stand respectfully during the anthem (64/24), with half responding that the refusal of some (a small percentage, it should be noted, even this past week) to do so makes them less likely to watch games.  I'll leave you with this quote from NBA star LeBron James, who plunged headfirst into the anthem firestorm by calling President Trump a "bum" on Twitter:

LeBron on Ohioans who voted heavily for Trump: "I don't think a lot of people was educated."

A former Trump staffer (!) criticized me on social media, insinuating that simply reporting James' grammatically-mangled sneering was an unfair attack, urging me to delete my tweet.  I pointedly declined, explaining why James is playing with fire by insulting his fans' intelligence:

An athlete demeaning his fans as politically uneducated is condescending & alienating. Bad grammar may be seen as ironic, given his insult. https://t.co/3DYqBDoON6

Athletes or celebrities who want to spout off about politics and get heavily involved in the electoral process can flap their gums to their hearts' content.  But those of us who disagree with their opinions -- or who believe that a basketball player who never went to college explicitly calling out Trump voters' supposed lack of education isn't a great look -- are allowed to speak up, too.  Maybe, just maybe, suggesting that half (or more than half) of your fans are ignorant dumdums isn't a brilliant play by a person whose fame is entirely derived from his prowess in putting an orange sphere through a hoop.