Pelosi: Let's Face It, DREAMers' Parents Did Something 'Great' By Breaking Our Laws 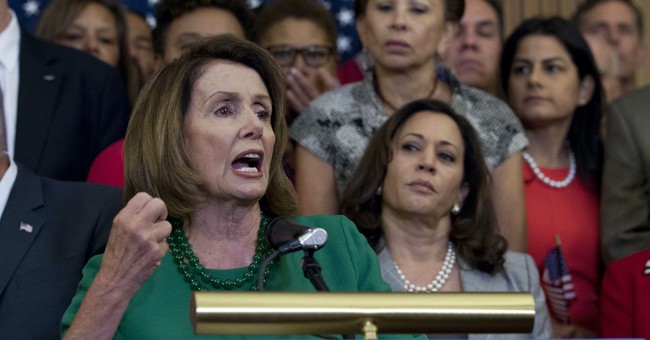 Everyone is against illegal immigration, Democratic politicians always insist as they push for liberal reforms -- just as they pretend that nobody is "pro-abortion."  But hardcore elements of their left-wing base belie both of those claims, from the anti-borders zealots to the "shout your abortion" fanatics.  What's somewhat unusual, though, is to watch a top party official let the mask slip in such a way that places him or her firmly on the wrong side of public opinion.  The reason that DREAMers engender so much sympathy from the general public is that they were brought into the country through no fault of their own, with America being the only nation many of them have ever known.  It's unfair to punish children for the unlawful acts of their parents, many Americans conclude, so it's just and compassionate to formally shield otherwise law-abiding DACA 'kids' from the threat of deportation.  That approximate sentiment forms the basis for such a broad consensus -- we'll get to some new numbers shortly -- that a bipartisan DREAM Act deal is a realistic expectation, even in this polarized era.  But leave it to Nancy Pelosi, reliable GOP bogeyman, to undermine her party's easy and effective messaging (skip ahead to the two minute mark):

"Their families did a great thing for our country, bringing these kids here...[DREAMers are] a brilliant part of our future."

She's on a roll.  Just recently, Pelosi grossly mischaracterized a free speech rally in San Francisco as a white supremacy hate fest, egging on the mob, and encouraging a heckler's veto.  It "worked," and the event was canceled.  Here, she fulsomely praises the families of DREAMers -- i.e., the deliberate lawbreakers -- basically thanking them for violating our immigration rules.  One of the reasons top GOP lawmakers have insisted that any DREAM Act bargain entail amped up immigration enforcement is that we've learned from experience that amnesties, and even rumors of amnesties, can serve as magnets for new illegal border crossings.  If the US government is going to take care of one generation of DREAMers, they ought to do more to ensure that the problem doesn't persist in perpetuity, necessitating additional future amnesties.  As far as not incentivizing illegal immigration is concerned, openly cheering on illegal immigrants who made conscious choices as adults is a terrible idea.  Americans understand why shielding DREAMers from deportation makes sense.  Casting the adults who put them in legal peril as heroes sends exactly the wrong signal.

The more that I think about it, though, the less I see this as a gaffe.  Pelosi was recently picketed and shouted down by pro-DACA protesters ("shut down ICE!"), including some DREAMers (not a great way to maintain goodwill, guys), for negotiating with President Trump at all.  They don't seem to care that she's more or less gotten her way in those talks thus far; the act of sitting down with "a monster" -- even if he's the extremely powerful, duly elected leader of the country -- is a betrayal unto itself, or whatever.  Pelosi didn't back down in that confrontation, but she's always feeling pressure from the Democratic left flank.  Waxing poetic about DREAM parents' amazing acts of national service is rhetorical appeasement for the braying Left, which is why she's presenting a potential DREAM Act bill as a "first step."  She probably figures that the media won't cover, let alone punish her for, her overreach, and that codifying DACA is so popular that she has a pretty wide berth for additional pandering.  She's right. Here are YouGov's latest findings on support for Trump seeking a DACA bargain with Democrats:

A plurality of Republicans approve of a would-be Trump deal even without any hint of border security concessions in the question prompt.  If the White House can tout new fencing and border agents within the pact, and Trump goes out and hails it as a big victory, those GOP numbers would likely spike.  And remember, Americans tend to love headlines about compromises; despite (legitimate) gnashing of teeth within some precincts on the Right after Trump's fiscal giveaway to Nancy and Chuck, fully 70 percent of voters approved of the move.  Trump's been rewarded with rare positive press, which he covets, and -- presto! -- his approval rating has rebounded a bit.  In short: 'Dealmaker makes deal, gets rewarded.'  Anyone else think more deals are inevitable?