Ryan: The House Will Not Pass a DREAM Act Without New Immigration Enforcement Measures 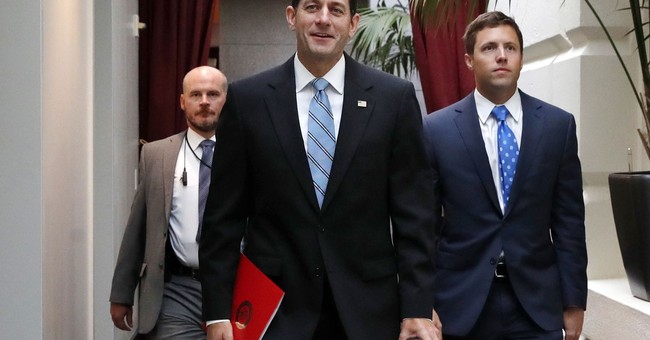 In an interview with me last evening on Fox News Radio, House Speaker Paul Ryan addressed several pressing issues facing Congressional Republicans.  First, he made the economic case for tax reform, asserting that despite a logjam of legislative items piling up this fall, he remains confident that GOP leaders have "daylight" on the calendar to get tax reform accomplished before Christmas recess.  Next, he correctly predicted that the House would approve the Senate-passed Harvey relief package today; the bill contained short debt ceiling and continuing resolution extensions, thanks to President Trump's agreement with Democratic leaders' request.  Trump's "early Christmas gift" to Schumer and Pelosi passed easily, overcoming some (totally justifiable) conservative opposition.  Ryan then poured ice water on reports of another potential Trump/Schumer collaboration, this time on eliminating the debt ceiling altogether:

GB:  There are reports today that the president is in talks with Chuck Schumer to eliminate the debt ceiling altogether. Is that something that you categorically oppose?

PR:  Yes, that's not something that we're interested in doing.  And the reason is, look, I'm a constitutionalist.  I very much passionately believe in Article One of "The Constitution," the legislative branch writes these laws.  The legislative branch has the power of the purse. And as ugly and uncomfortable as the debt limit is -- can become, I've found it to be a useful tool as a check on fiscal policy to help us get smaller government, to help us get some good fiscal conservative policy done. So it's something that we have found is a good speed bump in the road to big government that we want to use to actually, you know, get good policy done, so that we can actually...

PR:  -- get a handle on our debt and our deficits. So it's a thing that Congress has used from time and time again to do that and it's just one of those responsibilities that really squarely lands in the lap of congratulate, its Article One powers in "The Constitution," which is also the power of the purse.

GB:  Do you really think, though, that it's a strong leverage point? I guess you could point to 2011 and The Budget Control Act.

PR:  You know, it depends.  Sometimes it is and sometimes it's not.  The point, I would simply say, is it is a power of the purse power that belongs to the legislature.

On the DACA controversy, Ryan seemed eager to pursue the president's request to address the DREAMer challenge permanently through legislation. Chuck Schumer demanded a "clean" bill, with no extra elements attached, earlier in the week. Would House Republicans agree to a measure that did not include an added border security component? Ryan's response was emphatic and clear:

GB: What we've heard from the Democrats, Chuck Schumer and Nancy Pelosi, is that they want a clean bill...

GB: -- just the Dream Act, nothing attached. Jon Cornyn, your Republican colleague over on the Senate side, said no, no, there has to be immigration enforcement and some sort of compromise...

PR: That's exactly my position. Look, here's the point I keep making on this, is this DACA dilemma that we are experiencing here, why do we have it? It is a symptom of a bigger problem. And the bigger problem is we do not have control of our borders. And because we do not have control of our borders, we have this problem. So it's just reasonable and natural that we should address the root cause of this problem, lack of control of our borders, and get border security, interior enforcement, the things that you need to do to secure your borders so that you don't have a DACA problem 10 years from now. So we want to address the cause and the effect, the symptom and the root cause of the problem. And that is only reasonable. And that is what our point is. And so there is a compromise to be had here, and that's what this compromise looks like, in my mind.

GB: And so there will not be a stand-alone Dream Act coming out of the House?

It seems as though there's been a bit of softening in the last few days, with some Democrats indicating that they'd be willing to bundle enforcement (but not Trump's wall) with a DREAM Act -- and Nancy Pelosi claims Trump told her he'd sign it. They've been rather chummy lately, so perhaps she's in an unique position to know. We wrapped up by discussing whether Ryan fears that GOP leadership on the Hill has been marginalized by the Trump's wheeling and dealing with Democrats (with Trump basking in the glow of positive media coverage), and how the Speaker characterizes his relationship with the president. Here is the entirety of the segment: