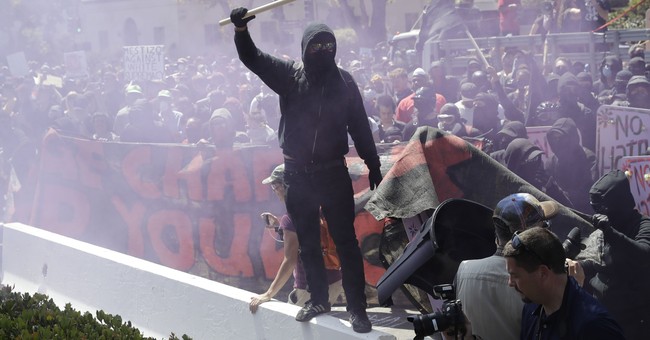 Let's begin with the important -- and evidently quite necessary -- stipulation that even if this past weekend's cancelled 'Patriot Prayer' rally actually was explicitly racist and hateful in nature, it would still represent constitutionally-protected speech and assembly.  Vile, loathsome views are covered by the First Amendment, as are gatherings of disgusting bigots.  But the abruptly-jettisoned event in question doesn't appear to have been organized, promoted, or advertised as a white supremacist or neo-Nazi meeting.  Here is Mercury News' explainer on the group and its leaders, who have specifically and caustically rejected racism:

While Patriot Prayer has a legacy of spawning violence at its demonstrations, its members say the Crissy Field event is designed to promote free speech...organizers with the group have strived to distance themselves from neo-Nazis and other hate groups...[Joey] Gibson, the founder of Patriot Prayer and the organizer of the rally, said he denounced racism and wouldn’t allow any extremists into his event. The permit approval, Gibson said Tuesday, was a sign that “the First Amendment will be respected”...In fact, the Law Center reported that at the most recent Patriot Prayer event, Gibson shouted from the stage “F*** white supremacists! F*** neo-Nazis!”

Although the Washington Post notes that Gibson and his cohorts have publicly and clearly repudiated racism and bigotry, the article repeats the seemingly-incurable mainstream media mistake of taking the non-credible, left-wing Southern Poverty Law Center seriously as a fair arbiter and chronicler of "hate" groups. The SPLC targets mainstream socially-conservative organizations like Alliance Defending Freedom with its disgraceful "hate" roster, which was used in the planning of a 2012 attempted mass killing by a left-wing activist at the Family Research Council. The leftist shooter who tried to massacre Congressional Republicans at a baseball practice in June was also a fan of the SPLC, according to the man's personal Facebook page.  I'll be the first to say that the SPLC is not responsible for the acts of extreme violence carried out by its supporters, but opposing guilt-by-association demagoguery should be a two-way street.  On that point, the Post story about 'Patriot Prayer' points out that the white supremacist who murdered two men on a Portland train this spring had "attended a rally organized by Gibson."  Why should that sully Gibson, who's condemned white supremacy?  Also, the paper fails to add that the perpetrator of that horrible crime was...a Bernie Sanders supporter.

Based on some additional reading about Gibson and his crew (I'd never heard of them until these last few days), they strike me as hardcore anti-Left activists and provocateurs who are eager to mix things up, and may even push the envelope a bit too far sometimes.  They do not strike me as hateful racists, especially considering their profane denunciations of hateful racists.  But the Bay Area's network of hard-left agitators and knee-jerk 'Resisters' couldn't be bothered by such distinctions, collectively determining that the 'Patriot Prayer' rally needed to be confronted with massive counter-demonstrations.  Democratic public officials took to the airwaves to denounce the group, including San Francisco's mayor, and House Minority Leader Nancy Pelosi -- who branded the gathering a 'white supremacist' event.  Pelosi went further, leaning on deeply ignorant and constitutionally-illiterate reasoning to call for the group to be banned because of the violence they might stir up.  Allahpundit is disgusted: "She’s all but openly endorsing the “heckler’s veto” here in recommending that citizens be denied the right to speak on public property because the reaction to them might turn threatening. It’s pure viewpoint discrimination."  Sure enough, the mounting likelihood of a violent backlash led organizers to call off their rally before it started (a subsequent press conference was also quashed), sparking "victory" celebrations among leftists.  The hecklers won again, using threats of physical attacks and civil unrest to stifle the speech of others:

The right-wing rally was cancelled in San Francisco, so protesters are holding a victory demonstration https://t.co/SfSQ4OIJdQ

The specter of violence triggering the cancellation of a free speech event was greeted as a "win" against "hate." Regardless of one's thoughts on 'Patriot Prayer,' this represents yet another disturbing episode in the swelling annals of anti-speech bullying.  And the chaos wasn't over yet -- not by a long shot.  At a Sunday event in Berkeley, pro-Trump protesters (and, intermittently, police) were swarmed and overwhelmed by Antifa.  A San Francisco Chronicle reporter who was on-scene throughout the melee concluded that the clashes and skirmishes could have gotten much worse, but was disturbed nevertheless by what she saw, starting with Trump backers getting "pushed around:"

Everyone is fighting. Clouds of pepper spray from the fray. Hundreds of men and women dressed in all black. #antifa

Police have completely disappeared from #Berkeley. People getting beaten up. Red flags being waved in the air.

Antifa radicals chased and pummeled their opponents and harassed journalists, and authorities were forced to take Joey Gibson -- the 'Patriot Prayer' leader who showed up in Berkeley -- into protective custody.  But because no one was badly injured, and no major property destruction was reported ("only" 14 arrests!), this disgusting scene was considered a success, by Bay Area standards.  It seems as though the emboldened, violent left-wing goons of Antifa have decided, not irrationally, they can dictate who can, and cannot, speak publicly in Greater San Francisco.  And prominent Democrats are actively supporting this brutish coercion by demanding that wrong-thinkers keep their mouths shut, lest they risk riling up the violent mob.

Responsible public servants wouldn't casually and lazily conflate somewhat hard-nosed right-wingers with Nazis and white supremacists.  Responsible leaders wouldn't act as unofficial surrogates for, and enablers of, the anti-speech heckler's veto.  Responsible liberal politicians would defend the First Amendment and use their public platforms to insist that left-wing extremists respect the law.  America has a festering political violence problem, to which the radical Left is a major contributor -- regardless of what the media decides to cover, or what liberal tastemakers deign to permit others to notice and acknowledge.  If Republicans are routinely asked to unequivocally denounce the views and conduct of despicable elements of the far-Right (and they should), why aren't Democrats held to account for encouraging, coddling, or ignoring disquieting ugliness and outright criminality on the far-Left?

I'll leave you with this: While Charlottesville and Berkeley have showcased some of the very worst people and impulses that exist in America, some of the heroism on display around Houston and the Gulf Coast -- public officials, first responders,  and private citizens helping people endangered by an "unprecedented" natural disaster -- is highlighting America at her very best.  White supremacists and Antifa thugs do not represent us.  People and impulses like this do:

UPDATE - Sometimes, uncomfortable realities become so clear that even those who might prefer to avert their gaze cannot: