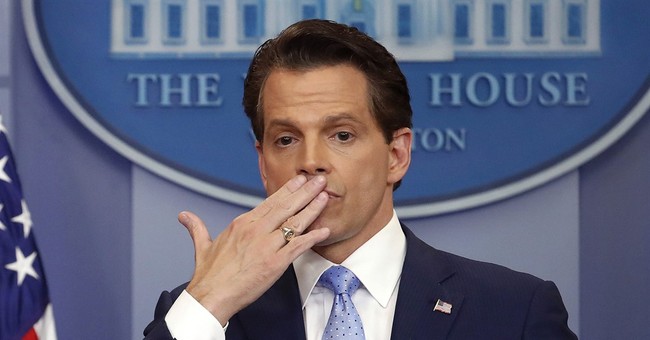 And in a flash, he was gone.  After arriving with a bang, Anthony Scaramucci made a steady stream of news over the span of ten hectic days, much of it highly salacious and distracting.  He spouted off about his enemies, leveled reckless allegations, and prompted resignations.  Ultimately, it all proved to be too much -- even for a president who is no stranger to vulgarity, and who was reportedly amused by his friend's sharp-elbowed antics.  The Mooch Era lasted less than two weeks, and ended before it technically even began.  A few thoughts:

(1) This is a significant initial power play by new White House Chief of Staff, Gen. John Kelly, who entered the administration as the Secretary of Homeland Security -- and who's occasionally voiced displeasure over certain Trump policies (he's also said to have expressed anger over the firing of James Comey).  It's been reported that one of Kelly's first orders of business was to streamline and control access to the president, which has been disastrously free-flowing, undisciplined, and unstructured.  Even the president's daughter and son-in-law will supposedly abide by the fresh, desperately-needed rules. His second order of business was to insist upon the departure of Scaramucci, whose epic and embarrassing unprofessionalism had already plumbed legendary lows.  If the out-of-control Trump administration is to be corralled in any meaningful or sustainable way, Kelly is off to a forceful start.  We're told that the president has handed Kelly full and wide-ranging authority to put his house in order.  These are hopeful early signs.

(2) However, unless the president himself is and remains committed to a less frenetic culture, any course correction will sooner or later be exposed as another transitory flash in the pan.  Trump thrives on chaos.  He is an impulsive man with little personal discipline.  His twitter feed is a message-hijacking machine.  The last two years of American political punditry are littered with promptly-disproven think pieces and on-air speculation about the emergence of a "new Trump."  So before declaring the dawn of yet another a new era, perhaps we should at least wait a few weeks.  It's possible that Trump's respect for military men is a relevant factor that makes this change different.  Perhaps Kelly really will make the administration incrementally and relatively more functional -- just as Kellyanne Conway stabilized things for a bit when the campaign was in serious shambles.  But the administration's direction, tempo and tone is defined by the man at the very top; if he's not willing or able to see a reboot through, shifts in upper management can only go so far, and last for so long.

(3) It's no secret that Scaramucci hated Reince Priebus, as Scaramucci made quite clear in his colorful interview with New Yorker reporter Ryan Lizza.  By ostentatiously boasting that he reported directly to the president, Scaramucci was deliberately undermining Priebus, whom he obviously wanted gone.  Well, he got his man; the former Chief of Staff resigned last week.  But in blowing up Priebus, Scaramucci ironically detonated a blast that sealed his own fate, too.  The man Trump tapped to replace Scaramucci's nemesis quickly ousted Scaramucci.  Lessons: Be careful what you wish for.  And perhaps learn the basics of how to interact with reporters prior to taking on the job of White House Communications Director.  Scaramucci did neither, resulting in an aborted, tempestuous tenure that will forever be remembered as the political equivalent of a surreal cameo appearance.

(4) In that fateful New Yorker meltdown, Scaramucci tore into White House leakers, expressing a desire to "kill" all of them.  In the same breath, he -- er -- explicitly leaked news about Reince Priebus' imminent departure.  And in pressuring Lizza give up his source, Scaramucci threatened to fire his entire comms team.  Well, now someone has been fired, and a high-ranking White House leaker has been figuratively "killed."  So both outcomes have come to pass, just not how The Mooch likely anticipated they would, presumably.

Recommended
The Derek Chauvin Trial Was a Travesty, Prosecutors Violated Rules That Protect Us All
John R. Lott, Jr.

(5) Beyond cleaning up the Lizza mess, establishing a manageable chain of command, and desiring a "clean slate," is there any chance that this emerging baggage may have contributed to Kelly's decision to orchestrate Scaramucci's unceremonious exit?

(6) Too melodramatic to check?

Anthony Scaramucci was escorted from White House grounds today after ouster, per source familiar with the scene

(7) Sean Spicer resigned over the Scaramucci hire, and Jeff Sessions seemed to be on extremely thin ice at DOJ before this latest circus act eclipsed that controversy.  Parting questions:

plus, Sarah Huckabee Sanders said today that the entire cabinet has POTUS' full confidence w/ no changes being discussed.

Share this on Facebook
Tweet
Firearms Reporter Brings Clarity to the 'Why Can We Shoot People in the Legs' Debate
Matt Vespa
What Officer Reardon Prevented Just Happened Somewhere Else: 13-Year Old Girl Charged with Murder
Rebecca Downs