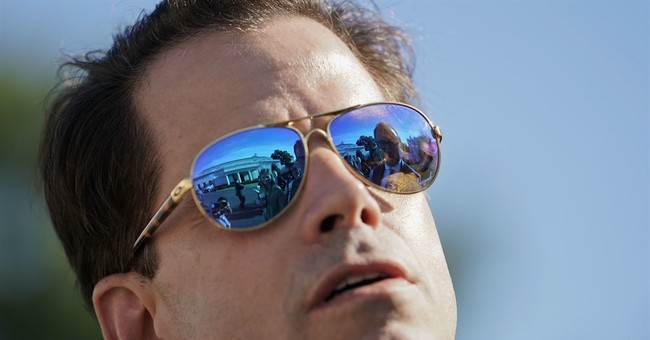 The drama has been exceptionally high in an already drama-filled White House since last night, when new White House comms chief Anthony Scaramucci took to Twitter to blast a "leak" of some of his financial information.  In the since-deleted tweet, he vowed to involve the FBI and tagged Chief of Staff Reince Priebus, seemingly implying that Priebus was the culprit.  Publicly implicating Priebus was his intent, it was later reported.  But not only did Scaramucci lack the evidence to prove Priebus' guilt (Scaramucci allies are reportedly drawing up a leak "diagram" that purports to finger Priebus), he apparently lacked the evidence that a leak had even occurred at all.  It turns out that the "private" data over which Scaramucci was raging is, in fact, no longer private:

The financial disclosure form that Mr. Scaramucci filed with the government appeared on Politico’s website on Wednesday night, showing that he has assets worth as much as $85 million. He made $5 million in salary and another $4.9 million from his ownership stake in his investment firm SkyBridge Capital in the first six months of this year, according to the filing. Mr. Scaramucci responded angrily. “In light of the leak of my financial disclosure info which is a felony,” he wrote on Twitter, “I will be contacting @FBI and the @TheJusticeDept.” ...Still, it was not at all clear that there was actually a leak in the first place, much less an illegal one.

Mr. Scaramucci filed the disclosure form in connection with his previous, short-lived job with the Trump administration at the Export-Import Bank. Under federal law, anyone can request such a report on a government website 30 days after its receipt. Mr. Scaramucci’s report says it was filed on June 23, which means it could be publicly released by the bank on July 23, or last Sunday. Politico did not indicate whether it obtained the report through such a regular request. Asked why he thought the report had been leaked illegally, Mr. Scaramucci responded by text: “They aren’t in process yet.” But when told his form could be released on July 23, he did not respond further.

Hours later, the Politico reporter who wrote the triggering story woke up to discover the brouhaha she'd slept through. She confirmed that she'd accessed the information through a standard records request:

She added that there was no Freedom of Information Act request necessary; it's just a public document.  Perhaps having realized he'd jumped the gun badly, Scaramucci claimed in a subsequent tweet that he hadn't accused Priebus of anything, and was merely putting people on notice that top administration officials would be aggressive in their anti-leak tactics.  But this morning on CNN, Scaramucci was back to implying that Priebus is a leaker, even though this episode did not entail a leak:

"So if @reince45 wants to explain that he's not a leaker, let him do that." @Scaramucci on @NewDay. Whoa.

He also spoke of his 'brotherly' ties with the Chief of Staff with a "Cain and Abel" Biblical reference -- an interesting choice, given how that relationship ended.  Kellyanne Conway also chimed in on the contretemps this morning, averring that the obligation to fill out financial disclosure forms can be "demoralizing" and turn away good people from entering government:

Whining about basic transparency protocols isn't a good look.  Neither is leaping to an incorrect conclusion that your colleague committed a felony by leaking your private data, and choosing to inveigh publicly about it before even determining if that's what really happened.  Couple this flashpoint with the president's ongoing battle with his own Attorney General (with much of the conservative movement rallying behind Sessions), and this White House looks as unprofessional and dysfunctional as ever.  If you're a Trump supporter who wants his agenda to succeed, you should be angry at him and his team for conducting themselves in this matter, not at others for noticing it.  And this half-cocked amateurism is having the opposite of its intended effect.

Liberal Twitter Up in Arms As Bill Maher Trends Again For Mercilessly Mocking the Woke Left
Townhall
Now the 'I work on the COVID floor at my hospital' variant is spreading on Twitter thanks to a veterinarian
Twitchy
Lauren Boebert's Opponent Is a Veterinarian Who Works in Wyoming and Claims Her Hospital Is Filled With COVID Patients
Redstate
Daily Dose of Downey: Black Americans in Blue Cities Pay the Price of Woke
PJ Media