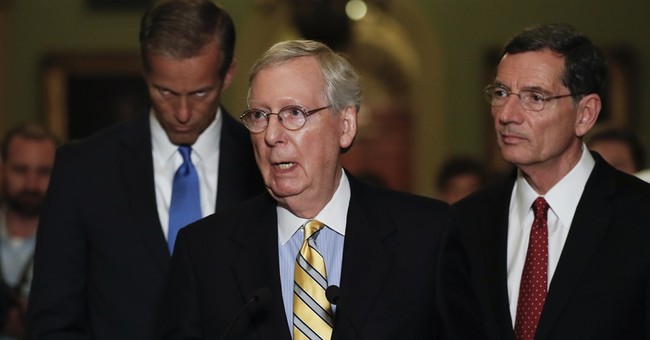 I wrote a similar piece directed at House Republicans in March, before they finally rallied together to advance the process.  Now, it's the Senate's turn.  Let's begin with a review of several realities. Fact one: Obamacare is unsustainable, failing, harming millions of people, and getting worse.  Fact two: For seven years, Republicans have been railing against the law, promising to repeal and replace it just as soon as possible.  They even held multiple votes (some of which went through) to demonstrate their enthusiasm for the task.  It was one of the precious few consistent and unified messages the party conveyed to voters.  Just give us the House, the Senate and the presidency, they said.  Voters did exactly that.

Fact three: Faced with a rare and historic opportunity to scale back the size of government and supplant a collapsing program, Senate Republican leaders now say they fear they're on the verge of abandoning this fundamental pledge because the various factions of their party cannot agree on a path forward.  Mitch McConnell sent up a flare late last week, signaling to his members that their ongoing deadlock would hand Democrats enormous leverage to negotiate an Obamacare "fix" that would almost certainly eschew conservative reforms while bailing out the existing law.  Super:

Acknowledging that Senate Republicans may not be able to pass their ObamaCare repeal legislation, Senate Majority Leader Mitch McConnell is warning that action will then have to be taken to stabilize insurance markets. “If my side is unable to agree on an adequate replacement, then some kind of action with regard to private health insurance markets must occur,” McConnell said at a Rotary Club meeting in Kentucky on Thursday, according to multiple reports. McConnell reiterated on Thursday that taking “no action is not an alternative.” “We've got the insurance markets imploding all over the country, including in this state,” McConnell said, according to The Associated Press...Senate Minority Leader Charles Schumer touted McConnell's comments, saying the Kentucky Republican “opened the door to bipartisan solutions.” "It’s encouraging that Sen. McConnell today acknowledged that the issues with the exchanges are fixable,” Schumer said.

Things could go a few different ways at this point:

(1) Senate Republicans could punt on Obamacare, then refuse to furnish Democrats with the votes to supposedly mend the ailing law.  The "Affordable" Care Act would continue to implode, and Republicans would have earned themselves a large part of the resulting blame.  The next time Democrats win an election -- which will happen, despite their unpopularity, ineptitude and overreach -- they'll play hardball by either making Obamacare even more expensive and government-centric, or by pursuing a disastrous single-payer scheme.  And Republicans will again go into opposition mode, having proven that when elected, they're incapable of advancing policies to address the concerns that they're more than happy to loudly diagnose.  An unserious abdication.

(2) Senate Republicans could punt on Obamacare, then join Democrats -- who are responsible for the current mess -- at the negotiating table.  Chuck Schumer will preen about "stabilizing" the exchanges (i.e., pumping more money into them, and possibly making the individual mandate more coercive) while insisting that meaningful and needed Medicaid reforms (please read every word of that piece, by the way) and other free market innovations are off the table.  Whatever bill ends up emerging from this process would inevitably be more expensive and less conservative than anything the GOP would produce on its own -- and could either prompt a filibuster by members of the majority party, or die in the more conservative House, returning us to the above scenario.  If the Republican Party enshrines and expands Obamacare in concert with Schumer and Nancy Pelosi, its conservative base will rightly revolt.  If skittish members are more concerned about losing the next election than addressing a massive policy problem in a manner that can remotely be framed as a "repeal" (neither the House nor Senate proposals would truly uproot the program), they should think hard about how their own base would react to a failure and betrayal of this magnitude.

(3) Senate Republicans can do the job they were elected to do, moderates and conservatives alike, and let the chips fall as they may.  Their overall proposal has improved from its initial iteration, though I'm still interested in seeing a detailed and convincing analysis of why a six-month waiting period for non-continuously insured consumers would be more effective at improving risk pools than the ineffective individual mandate has been.  This creative idea from Ted Cruz has its drawbacks, including risking driving some costs higher (though I'm not sure this critique operates within the bounds of reconciliation rules and the reality that Democrats will not lift a finger to help Republicans pass their bill), but at least he's making a good-faith effort at reaching a solution.  For what it's worth, Schumer is lamely attacking the potential Cruz compromise as a "hoax."  Meanwhile, a key Medicaid reform authored by Pat Toomey is essential to begin reining in a runaway entitlement that cannot be sustained.  Conservative columnist George Will, echoing the editors of the Wall Street Journal, wonders if the Republican Party's utility as a governing enterprise might cease to exist if its members are unwilling to make the sort of necessary, math-based choices to which Democrats are positively allergic:

It required tenacity by Toomey to insert into the bill a gradually arriving, but meaningful, cap on the rate of growth of per-beneficiary Medicaid spending. It is requiring of Toomey and kindred spirits strenuous efforts to keep it there, which reveals the Republican party’s itch to slouch away from its uncomfortable but indispensable role as custodian of realism about arithmetic. Toomey notes that in every decade since Medicaid began in 1965, it has grown faster than the economy, and than almost every other program, none of which matched Medicaid as a driver of the deficit. In Medicaid’s life, its expenditures have grown more than twice as fast as nominal (unadjusted for inflation) GDP...On June 29, with the health-care debate raging, the Congressional Budget Office revised $134 billion upward, to $693 billion, its projection for the 2017 budget deficit. And it raised by $686 billion its projection of cumulative deficits over the next decade.

Lawrence Lindsey, formerly a governor of the Federal Reserve System and an assistant to both presidents Bush, puts the matter plainly: “No large component of the federal budget can perpetually grow faster than nominal GDP.” In 1970, Medicaid spending was 1.4 percent of federal spending. In 1980, it was 2.4 percent. In 1990, 3.3 percent. By 2000, it had doubled to 6.6 percent. In 2010, it was 7.9 percent. In 2017, it will be 9.8 percent...As Lindsey says, Medicaid’s unrestrained growth will become economically impossible, then arithmetically impossible...Democrats certainly are not the party of arithmetic. Republicans can fill that comparatively mundane but useful role by enacting Toomey’s provision, which is, as Lindsey says, “the first serious attempt to limit the unsustainable rise in entitlement spending in our lifetime.” Either by preserving or by rejecting Toomey’s measure, congressional Republicans will answer an increasingly pertinent question: Is the Republican party necessary?

Will also notes that as recently as the Clinton administration, Senate Democrats unanimously expressed "strong support for the Medicaid per-capita cap structure."  A handful of those members remain in the chamber today.  Will asks, "what about Medicaid’s trajectory since then has changed to justify them changing their minds?"  It's a good question in theory, but he already knows the answer: This has nothing to do with empirical data or responsible governance, and everything to do with politics.  Democrats are invested in an attack line that any "cuts" to Medicaid (which aren't actual cuts) would end up 'killing' thousands of Americans each year.  This is a terrible argument, rooted at best in questionable data, which can also be marshaled to condemn Obamacare as a mass killer.  The Democrats are a leftward-drifting party whose sole animating economic policy idea is larger government, financed -- if financed at all -- by "rich" taxpayers.  (About that...)

Republicans have been handed a crucial chance to modestly scale back the bloated, unaccountable and unsustainable federal leviathan.  They also campaigned on a platform of addressing a terrible law that is deteriorating badly, promising to lower costs.  If they craft a policy that fails to improve the status quo for millions, they are likely to lose some elections.  But if they succumb to paralysis, and fail to seize this moment by countering unserious hysteria with reasoned arguments and better policy, Will's concluding question will become yet more pertinent: Is the Republican Party necessary?  If McConnell's conference cowers and crumbles in the face of adversity (I should mention that they've stuck together with the chips down before), good luck with this formula:

1) Campaign vs Obamacare for 7 yrs

4) Ask conservatives to vote for you again ?? https://t.co/wUuuQoZs9Z

And by the way, while much has been made of the unpopularity of the Senate GOP bill -- with numbers like these arising from a blend successful demagoguery, united liberal opposition, and conservative divisions -- it's not as if Americans are suddenly in love with the Democrats' failing product:

A Fox News poll taken in late June also showed a majority in favor of at least partial repeal.