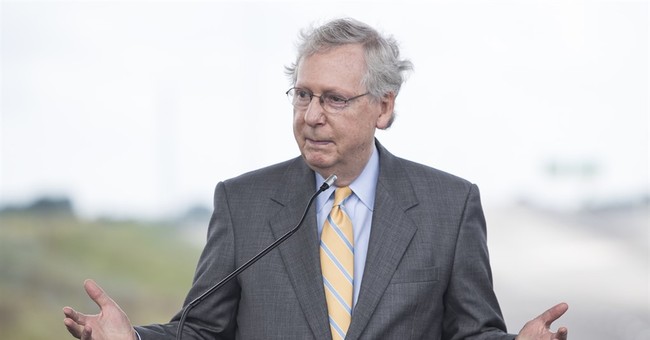 Republican voters are not going to be happy about this one. On Thursday, Senate Majority Leader Mitch McConnell touted anything but confidence as he provided an update on the GOP’s efforts to repeal and replace Obamacare.

“If my side is unable to agree on an adequate replacement, then some kind of action with regard to private health insurance markets must occur,” McConnell said at a Rotary Club meeting in Kentucky on Thursday, according to multiple reports. (The Hill)

In other words, McConnell just admitted that the GOP may not be able to make good on the platform it’s campaigned on for seven years.

Even more concerning for conservatives is that Senate Minority Leader Chuck Schumer was “encouraged” by McConnell’s comments.

"It’s encouraging that Sen. McConnell today acknowledged that the issues with the exchanges are fixable,” Schumer said. “As we’ve said time and time again, Democrats are eager to work with Republicans to stabilize the markets and improve the law. At the top of the list should be ensuring cost-sharing payments are permanent, which will protect health care for millions.”

Sens. Ted Cruz (R-TX) and Mike Lee (R-UT) have introduced a last minute effort to try to save their health care plan. Their amendment would allow states to offer any insurance plan they like, as long as one complies with Obamacare. Conservative groups like Tea Party Patriots were pleased with the addition. However, moderate Republicans like Susan Collins (ME) will not vote for the Senate GOP health plan until it dramatically changes.

McConnell can only afford to lose two Republican votes. As such, the vote has been delayed until after the July recess.