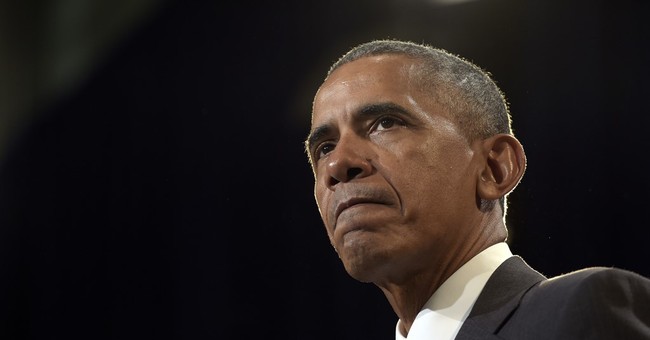 Behold, the latest machinations of our newly-enriched "peace partners" or whatever, who -- as President Obama himself anticipated -- have been putting their sanctions relief windfall from the nuclear agreement to prompt use, stepping up support to terrorists and anti-American militias. Their world-leading state sponsorship of terrorism is "undiminished" since the Obama administration bypassed Congress and struck an agreement with the Al Qaeda-harboring regime, under which Tehran receives tens of billions of dollars in exchange for a temporary, loophole-filled pause of their previously-illegal nuclear program.  Contra Tim Kaine, the agreement does not even remotely "end" Iran's nuclear ambitions.  Just the opposite, in fact.  So with their coffers replenished, Iran is doing what Iran does -- via Reuters:

Iran has stepped up weapons transfers to the Houthis, the militia fighting the Saudi-backed government in Yemen, U.S., Western and Iranian officials tell Reuters, a development that threatens to prolong and intensify the 19-month-old war. The increased pace of transfers in recent months, which officials said include missiles and small arms, could exacerbate a security headache for the United States, which last week struck Houthi targets with cruise missiles in retaliation for failed missile attacks on a U.S. Navy destroyer. Much of the recent smuggling activity has been through Oman, which neighbors Yemen, including via overland routes that take advantage of porous borders between the two countries, the officials said...That raises a further quandary for Washington, which views the tiny Gulf state as a strategic interlocutor and ally in the conflict-ridden region. A senior U.S. administration official said that Washington had informed Oman of its concerns, without specifying when...The Iran-allied Houthis gained a trove of weapons when whole divisions allied to former Yemen President Ali Abdullah Saleh sided with them at the start of the war last year. But Saudi Arabia and Yemen’s exiled government say they also receive substantial amounts of weapons and ammunition from Iran. Tehran views the Houthis as the legitimate authority in Yemen, but denies it supplies them with weapons.

Yemen, you may recall, was touted by Obama as a success story in the region. Oops.  As the Reuters story mentions, not only are the Iranians increasing their global meddling, they're arming a group that is firing missiles  at American ships, prompting retaliatory strikes.  If you're keeping track of this brilliant 'smart power' diplomatic stroke, the US government forked over billions to a known sponsor of terror, which then...sponsored terror, transferring weapons to a militia that is now attacking American warships.  Take a bow, Mr. President.  And Madame Secretary, who laid the groundwork for the reckless nuclear accord -- which she still supports, despite a broad bipartisan consensus against it.  Meanwhile, Iran continues to flex its muscles in Iraq, helping to fill the power vacuum left over by the Obama/Clinton foolishly hasty, politically-motivated withdrawal from that country (where Iranian bombs have killed hundreds of US servicemen, it must be noted).  Things have gotten so bad with ISIS that Obama has quietly redeployed thousands of Americans to Iraq, though the administration insists they are in a non-combat role.  Tell that to the US soldier who was killed by an enemy IED just this week near Mosul.  And in case you missed Cortney's post earlier in the week, the Iranian government is demanding more ransom payments in exchange for the release of additional US hostages, more of whom Iran has inevitably seized since the last cash-for-hostages scheme.  The Washington Post's editorial board took notice of Iran's conduct vis-a-vis hostage-taking and ransom-demanding, scolding the Obama administration:

More and bitter evidence of [enduring tensions] came Tuesday, when Tehran announced that two American citizens and a permanent U.S. resident had been sentenced to 10 years in prison on charges of “cooperating with the hostile U.S. government.” ... The government of Hassan Rouhani, which negotiated the nuclear deal with the Obama administration, is often portrayed as opposed to this de facto hostage-taking. If so, the government appears powerless to prevent it. Instead, officials complain about the relatively slow return of Western investment and trade following the lifting of United Nations sanctions, even as some of those who promote the opening are unjustly imprisoned. Iranian foreign policy, too, remains unchanged. The regime has dispatched thousands of fighters to Syria to prop up the regime of Bashar al-Assad and is using Shiite militias to extend its influence across Iraq. It is encouraging Russia’s new bid for influence in the Middle East while doing its best to drive out the United States...Though it was officially part of a separate claims settlement, the Obama administration’s delivery of $400 million in cash to the Iranian regime at the time of the release of Mr. Rezaian and other prisoners may have whetted the appetites of Tehran’s jailers.

"May have."  Cute.  Iran is a malignant actor running roughshod over a weak American president who is obsessed with protecting the legacy of the terrible nuclear deal he struck, at virtually any cost. His administration paid one massive ransom to Iran to buy back some imprisoned Americans (the "official" story is a laughable pretext), and now -- surprise! -- Tehran is back at that well, asking for more. And why wouldn't they? Obama has offered concession after concession, even after the lopsided accord was finalized -- including lifting sanctions on key banks closely tied to Iran's illegal ballistic missile program. The regime is getting everything it wants, including, it seems, the ability to purchase new airplanes from US companies. A comprehensive, humiliating, dangerous rout.  And by the way, Mr. President:  No, Israel does not support the Iran deal.