State Department: By the Way, Iran is Still an Active Terrorist State 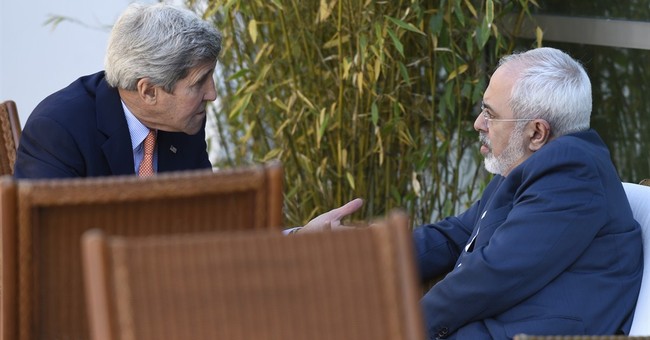 This would be the very same State Department whose leadership remains singularly obsessed with striking a nuclear accord with the very same regime in Tehran -- via the New York Times:

Iran continued its “terrorist-related” activity last year and also continued to provide broad military support to President Bashar al-Assad of Syria, the State Department said Friday in its annual report on terrorism. The assessment suggests that neither the election of President Hassan Rouhani nor the prospect of a nuclear accord with the United States and its negotiating partners has had a moderating effect on Iran’s foreign policy in the Middle East. “In 2014, Iran continued to provide arms, financing, training and the facilitation of primarily Iraq Shia and Afghan fighters to support the Assad regime’s brutal crackdown,” the report said. “Iran remained unwilling to bring to justice senior Al Qaeda members it continued to detain and refused to publicly identify those senior members in its custody,” it added...paints a picture of an aggressive Iranian foreign policy that has often been contrary to the interests of the United States. Even when the United States and Iran have a common foe, as they do in the Islamic State, the Iranian role in Iraq risks inflaming sectarian tensions...Although the report covers 2014, American officials said the Iranian policies described in it had continued this year.


Secretary Kerry is scheduled to travel to Vienna to preside over final-stage nuclear talks later this week, as the "deadline" (click through for the reason behind those scare quotes) for a deal fast approaches. When he arrives in Austria, he'll once again sit across the table from the world's leading state sponsor of terrorism, whose treacherous conduct has continued uninhibited over the course of these negotiations.  The report, which also found that worldwide terrorist attacks are up 35 percent since 2013, calls Iran's material support and engagement in international terrorism "undiminished." The Obama administration counters that terrorism-related sanctions against Iran will remain in place even if a deal is struck, but this is a sad rhetorical fig leaf.  Bruising nuclear-related sanctions -- the latest round of which finally forced the Iranians into a negotiation, and which were opposed by President Obama prior to being leveled -- will be lifted.  Perhaps immediately.  Without requiring any ongoing demonstration of compliance, and with no realistic mechanism for re-imposition if the regime is discovered to be cheating.  (Cheating, I'll remind you, is what they've repeatedly done, and what they continue to do to this day).

Billions of fungible dollars will flow back into Iran, relaxing the pressure on that country's economy, and affording the regime more resources with which to carry out its meddlesome and terroristic designs across the globe. The administration's "fact sheet" outlining the basic contours of an agreement entailed several major departures from previously-stated US positions.  Iranian leaders subsequently rejected the document anyway, digging in their heels on immediate sanctions relief and denying inspectors access to military sites.  What's now unclear is whether the US delegation is prepared to allow Iran to fully or partially renege on another major requirement -- fully detailing the prior military dimensions of its rogue nuclear program.  John Kerry appeared to abandon that long-held Western demand last week, sparking incredulous outrage from a bipartisan cadre of Senators.  The State Department quickly entered "walk back" mode:

State Department spokesman John Kirby also stressed to reporters that there wasn't "any kind of concession or change in the policy. It's just simply not true." Instead, he said, "the sanctions lifting will only occur as Iran takes the steps agreed, including addressing possible military dimensions." But he added, "We've said we're not looking for a confession (from Iran); we've already made judgments about the past." The U.S. and five world powers negotiating with Iran have long stipulated that Iran come clean about any past efforts to develop a military dimension to its nuclear program. U.S. officials and European diplomats have pledged that sanctions relief would be tied to Iran answering lingering questions from the International Atomic Energy Agency, the UN nuclear watchdog.


"We're not looking for a confession" certainly sounds like a softening stance.  Either Iran must fully disclose every detail of its routinely-denied, illegal nuclear weapons program, or it must not.  Given Sec. Kerry's history of blurting out statements that eventually become formal (and failed) US policy, State's apparent disavowal of this equivocation is not entirely convincing.  One of the lawmakers who's been most critical of this potential concession is Senate Foreign Relations Committee Chairman Bob Corker.  Allahpundit scoffed at Corker's indignant reaction, calling the Tennessee Republican an Obama enabler who's already rendered his own opposition to the White House's Iran policy impotent.

Instead of insisting that the final agreement be regarded as a treaty, requiring the support of two-thirds of the chamber for ratification, Corker proposed letting naysayers try to block the treaty with a resolution of disapproval instead. The resolution could be filibustered by Democrats before it’s enacted, or it could be enacted and then vetoed by Obama. The only way to guarantee that the resolution will become law is to have a veto-proof majority — two-thirds of the Senate — willing to vote against it, a near-impossibility when the GOP controls only 54 seats. Corker, in other words, reversed the constitutional presumption that treaties are deemed blocked unless they receive supermajority support so that a final agreement with Iran will be deemed passed unless it receives supermajority opposition.


While I share AP's profound frustration with the current state of play, I don't think it's fair to say that Corker "reversed the constitutional" dynamic. President Obama did that. As I explained in an analysis last month, the president decreed that this treaty would not be submitted to Congress as a treaty.  Period.  In fact, he adamantly opposed Congress having any formal say over the deal, despite strong public opinion in the opposite direction.  He was forced to retreat on this point upon receiving a rare, unanimous slap-down from the Senate Foreign Relations Committee.  Congressional Republicans could have demanded that Obama submit the Iran document as a formal treaty -- at which point Obama would've promptly replied, "no," and unilaterally signed the terrible Iran deal anyway.  I wrote that Corker's "Obama-enabling" legislation at least guaranteed three worthwhile outcomes:

(a) prohibits the administration from lifting any sanctions over a two-month review period, (b) forces the White House to turn over every single page of the finalized deal's text, and (c) establishes a recurring 90-day review cycle that persists throughout the duration of the deal. All three of these provisions are valuable: The full text allows opponents to research the granular details and verbiage of the actual accord itself, not a White House "fact sheet." The freeze gives critics a chance to flood the public discussion with substantive criticisms of the agreement. And the ongoing reviews offer a mechanism for a future president to pull the plug.


Team Obama is intent on closing a deal -- any deal -- with Iran, which they'll wave around and trumpet as a triumph of diplomacy. In fact, the president has jettisoned his once-staunch-sounding stance that a nuclearized Iran is "unacceptable," effectively conceding that the anti-American regime will be a nuclear-threshold state within 13-15 years, even under the unlikely scenario in which Tehran fully abides by the terms of the agreement. Years down the road, a nuclear-armed Iran will be someone else's problem. As things stand, Tehran will maintain a vast nuclear infrastructure, including the fortified underground sites it hid and lied about for years.  None of its nuclear sites will be closed.  Thousands of centrifuges will continue to spin, including advanced-level centrifuges.  (You'll also recall that Iran has increased its cache of enriched uranium by 20 percent over the course of the current talks, despite boasts from Obama that their program had been "halted" by the interim agreement, resulting in their stockpile being "reduced").  This will more or less establish an internationally-recognized right to enrich, of which other regional regimes will definitely take note.  And, as mentioned earlier, Iran's international terrorism and destabilizing subterfuge will carry on, unabated and better-funded.  Other significant concessions are no doubt taking shape as you read this.  Obama is evidently prepared to accept all of it; unfortunately, he's the president.

Absent another lawsuit or a quixotic impeachment push (which would be greeted like manna from heaven by Democrats), the GOP has very few tools at its disposal to prevent this reckless giveaway from occurring. The best they can do is actively undermine its legitimacy in the eyes of the American public and the international community, pointedly reminding everyone that because of Obama's stubborn non-treaty approach, his unilateral deal is temporary and does not bind future presidents or Congresses.  This is Obama's legacy jaunt, not America's lasting policy.  The Corker bill (now law), would force Obama to jam through a controversial foreign policy move vis-a-vis

a committed US enemy over the clearly-stated will of Congress.  This would give Republicans ample ammunition to further delegitimize the move. In the age of Obama, this is -- dispiritingly -- their best play.  I'll leave you with this.  Allies:

.@joshrogin/@EliLake scoop: Iran's Forces and U.S. Share a Base in Iraq http://t.co/TiMRjLk7Qg

Editor's Note: 'End of Discussion' only mentions Iran once, but you should still buy it.