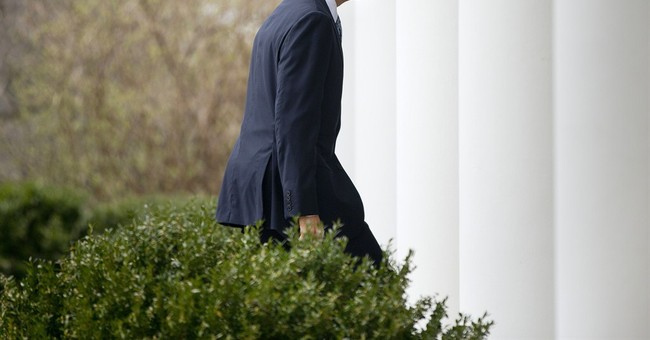 President Obama insists that his administration's preliminary outline of a nuclear deal with Iran is a "good deal," and the best option the West could have hoped for. Despite asserting for years that no deal would be preferable to an overly-permissive one, the White House now presents its proto-agreement as the only real alternative to all-out war.  This line of argument relies on a now-familiar demagogic construction from Obama: "It's my way, or catastrophe -- and those who disagree are reckless ideologues."  In examining the terms of the agreement, however, one is struck by how far it strays from the administration's stated goals heading into negotiations.  Obama has moved the goalposts dramatically (as is his wont) and is hoping that observers will simply disregard his previous statements and stances (as has long been his wont).  The Washington Post's editorial board declines to wipe its collective memory and mindlessly pick up pom-poms for Obama's new definition of what constitutes an acceptable bargain.  The stinging opening passage from their tough house editorial entitled, "Obama's Iran deal falls far short of his own goals:"

The “key parameters” for an agreement on Iran’s nuclear program released Thursday fall well short of the goals originally set by the Obama administration. None of Iran’s nuclear facilities — including the Fordow center buried under a mountain — will be closed. Not one of the country’s 19,000 centrifuges will be dismantled. Tehran’s existing stockpile of enriched uranium will be “reduced” but not necessarily shipped out of the country. In effect, Iran’s nuclear infrastructure will remain intact, though some of it will be mothballed for 10 years. When the accord lapses, the Islamic republic will instantly become a threshold nuclear state. That’s a long way from the standard set by President Obama in 2012 when he declared that “the deal we’ll accept” with Iran “is that they end their nuclear program” and “abide by the U.N. resolutions that have been in place.” Those resolutions call for Iran to suspend the enrichment of uranium. Instead, under the agreement announced Thursday, enrichment will continue with 5,000 centrifuges for a decade, and all restraints on it will end in 15 years.


Here's video of Obama in 2013 dismissing critics of the interim agreement the P5+1 powers reached with Iran (which the regime subsequently "accidentally" violated while actively cheating on other international embargoes), assuring concerned Americans that the US government did not recognize any Iranian right to enrich. He detailed some additional concessions an eventual deal would need to secure from Tehran (via CNS News):


Obama went on to say that a core question would be whether Iran demonstrates a willingness to "roll back" its nuclear program's advancements. Many of those advancements came to fruition in secret, rogue facilities that were hidden from international inspectors, in direct violation of the Nuclear Non-Proliferation Treaty (NPT), to which Iran is a signatory. Those NPT breaches prompted a string of UN resolutions and were the impetus for the tough sanctions regime (opposed at the time by Obama) that ultimately forced the regime to the bargaining table.  Yesterday's announced framework would vitiate all of those existing UN resolutions and lift all nuclear-related sanctions (with re-imposition being a highly unlikely outcome, even if Iran is accused of cheating).  The outline cites NPT as a backstop against Iranian misbehavior beyond agreed-upon 10- and 15-year restriction expirations, but the regime has repeatedly flouted that treaty.  Why would things be any different?  In any case, according to Obama's own previously-stated standards, any Iran deal was supposed to achieve certain minimum aims:

(1) "End their nuclear program," with the US refusing to acknowledge any Iranian "right to enrich."   The new framework keeps Iran's nuclear infrastructure almost entirely in place, requiring mostly reversible pauses in capacity and capability.  It enshrines Iran's right to enrich uranium, permitting the regime 5,000 centrifuges to do so.

(2) Require Iran to "abide by UN resolutions."  The new framework eliminates and supplants those resolutions, on which Iran had repeatedly cheated, and is still failing to meet with full compliance.

(3) Reflect the reality that Iran doesn't need "an underground, fortified facility like Fordow" for a peaceful program.   Instead of being eliminated under the new framework, Fordow remains operational, with hundreds centrifuges spinning.  Iran merely agreed to temporarily treat Fordow as an academic "nuclear research" location, abiding by a 15-year moratorium on uranium enrichment.

(5) Prevent Iran from using and developing "advanced centrifuges," capable of producing more potent nuclear material, faster.  The new framework does limit active centrifuges to the simplest form available for ten years, after which Iran's stockpile of five more advanced centrifuge models can come back on line (they are put into "timeout," not destroyed, under the deal).  Even during the ten-year pause, Iran is allowed to engage in "limited research and development with its advanced centrifuges."

(6) Require Iran to "roll back" nuclear advancements.  While some technologies are frozen and mothballed, precious few elements of Iran's nuclear program will be irreversibly dismantled, and none -- zero -- of its existing nuclear sites (including the secret ones Iran lied about while making important advancements) will be closed.


The IAEA's former nuclear inspections chief declares himself "puzzled" by the deal, flatly stating, “you’re going to leave Iran as a threshold state. There isn’t much room to maneuver.”  That bleak assessment echoes the exact concerns expressed by the Israeli government, which strongly opposes the proposed agreement.  Meanwhile, the French are castigating yesterday's developments as an exercise in weak-kneed capitulation:

On Friday, French Foreign Minister Laurent Fabius told Europe 1 radio that France had rejected an original of the deal outline as “not solid enough”, and had held out for firmer conditions. However, Fabius told the radio station that the Iranian delegation had responded by threatening to walk out of the talks. The French delegation was considered by observers to be one of the hardest bargainers of the P5+1 countries...French Foreign Minister Laurent Fabius, who represented France in the nuclear talks between Iran and world powers, revealed on Friday that his nation had rejected an original version of the deal reached the day before for not being “solid enough.”


Desperate to keep the Iranians at the table, John Kerry accepted those "not solid enough" terms one day later.  I'll leave you with video of Iranians celebrating in the streets over what the regime has been applauding as a big victory, some hardliners' grousing notwithstanding:


Before you go, read this piece by Daniel Drezner, who counts the ways the new framework could still fall apart prior to finalization.