Analysis: Trump Bounces Back, But Does the Race Change? 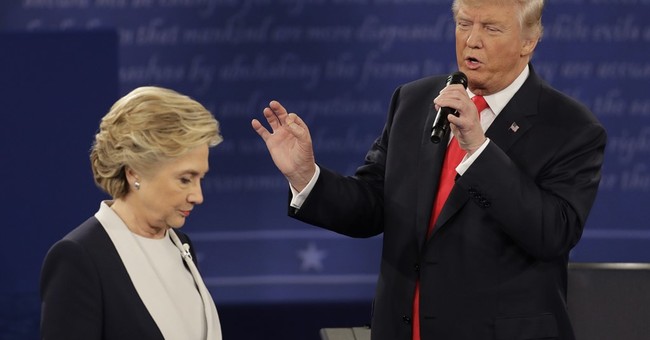 Hillary Clinton won the first 2016 presidential debate, and it wasn't especially close. Last night, with his divided party in crisis -- and after a wild psych-ops, pre-debate appearance with Bill Clinton's accusers -- Donald Trump turned in an undeniably improved showing for 90 minutes. In doing so, he steadied himself, decisively won several exchanges, and prevented Mrs. Clinton from dealing a death blow to his faltering candidacy. It was a surreal night, opening with no hand shake between the candidates and a series of blistering personal attacks, then somehow closing with compliments, bipartisan applause in the hall, and a hand shake. A few thoughts:

(1) Trump was noticeably more comfortable in the town hall format, as opposed to the staid two-podium, darkened-room setting of round one. Hillary's initial calm, forceful answer on the Trump Tape controversy was vastly better than his uncomfortable, scattershot responses. He "went there" on accusations of sexual misconduct and assault against President Clinton, which is fair game, but I'm not sure it's smart politics. Given his very rocky start, there was a chance the entire evening could have veered completely off the rails for him. Then came something of a turning point. On Hillary Clinton's email scandal, Hillary gave a poor, inaccurate answer -- and Trump tee'd off, with some surprising specificity. The media will play his "jail" line on a loop, which admittedly may hurt him with some undecided voters who worry about his temperament. (I would remind outraged pundits that a majority of voters disagreed with the DOJ/FBI's highly questionable decision not to indict Clinton). Nevertheless, in the moment, his slam got an audible reaction, which emboldened him. He remained on offense for much of the night. By reminding viewers of her "personal emails" lie, Trump induced her to repeat that debunked lie:

(2) The subject then shifted to Obamacare, unhelpfully to her. Trump again was sharper than usual with bruising criticisms of the impact -- and the deceitful marketing -- of the law, correctly saying that it will "never work." Hillary's responses included flat-out admitting that Obamacare is failing on affordability, which was the central premise of the policy that she first proposed  in 2008. Her pledge to fix it rang hollow. And in response to a hard follow-up from the moderators, Clinton had to explain away her husband's recent critiques, calling the law "crazy" and rightly asserting that it's hurting people. Even though he was woefully short on specifics regarding an Obamacare replacement plan, it was a weak segment for her all in all.  She was on her heels.

(3) Perhaps Trump's best moment of the whole evening was came in response to Hillary's terrible spin on the 'private versus public stances' passage from one of her Wall Street speeches, which were leaked this week by hackers. She tried to explain the context of that comment, which only highlighted the fact that she has steadfastly refused to release those transcripts to the public. She claimed that she was referencing Abraham Lincoln's approach to governance, having recently seen the film Lincoln at the time. Trump's retort was quick-witted, cutting, and genuinely funny:

(4) Team Clinton was clearly ready for a reprise of Trump's "she's been in DC 30 years" line of attack, which has been effective. Her rebuttal to that, citing her record, was pretty good -- as was her sardonic clapback when Trump asked why she hadn't changed tax laws while she was in the Senate. She noted that there was a Republican president in office at the time, and explained the concept of presidential vetoes to him. He looked silly.  It's worth noting that in another attempted real-time fact-check (she often overreached, casting entire answers as completely false), she got it wrong.  For his part, Trump parried the inevitable "you didn't pay income tax for nearly 20 years" criticism relatively well in some respects, but appeared to confirm the underlying attack. Democrats will get some mileage out of that.

(5) On international affairs, Trump was a bit of a jumbled mess as usual, but he did manage to lay a lot of blame for global chaos at the feet of the failed Obama/Clinton foreign policy. His worst moments entailed pretending that the Russians may not be responsible for recent hacks and leaks designed to influence the US election, and stating that Syria's butcher is targeting ISIS. Assad has repeatedly targeted civilians, including with weapons of mass destruction. He appeared to be making excuses for both Putin and Assad, openly breaking with his running mate on the issue.

(6) Each candidate had a few glaring missed opportunities. When Trump went hyper-personal late in the debate by stating that Clinton has "a tremendous amount of hate in her heart," she barely even responded at all. Odd choice to just let that slide. And on several occasions when Trump obviously and painfully punted on specifics, she never drove that home to the audience. Highlighting his vast ignorance and lack of tangible plans to fix the nation's problems should be one of her top priorities in these forums, but she barely even tried last night. As for Trump, when Hillary spoke about her commitment to limiting the influence of money in politics, the Clinton Foundation lucrative influence racket immediately jumped to mind. But not his mind.  No comment.  And despite referencing Wikileaks on several occasions, Trump didn't hold her feet to the fire on the 'open borders and open trade' comments she made to bankers behind closed doors. Ignoring the most damaging quote from those hacked emails bordered on malpractice.

(7) There was a lot of sound and fury about he moderators online, but I'll quasi defend them. Their questions were hard-nosed for both candidates. The issue was the perception, to my ears, that they interrupted Trump more often than Hillary -- and not just because he went past his speaking time more often than she did. ABC's Martha Raddatz also overstepped her bounds on foreign policy, openly arguing with Trump about military tactics at one point.  Her tone crossed into adversarial at times, which felt inappropriate.  A few of the audience questions were duds, but it was fine overall.

(8) Bottom lines: Given his poor start on the tape flap, occasional over-the-line insults, characteristic misstatements, and policy paucity, it's hard to see how very many non-Trump partisans would identify him as the winner of this debate. But he absolutely improved over last time, prevented Clinton from landing a coup de grace, and likely paused the intraparty exodus. He was also effective in pounding two themes: Dishonest, bad judgment. There's little doubt that he delighted his base throughout the evening, who will see last night as an unequivocal win. Hillary was shaky and rattled at times, and many of her answers were instantly forgettable. But the trajectory of this race is heavily in her favor. Heading into last night, RCP's state polling averages gave her a 340-198 electoral college lead. A dominant Hillary victory could have buried him. She didn't deliver one, scrapping to a draw, in which he was the star of the show.  So while he didn't self-immolate, I'm not sure he changed the game, even if he probably helped himself more than he hurt himself. I suspect that many down-ticket Republicans are breathing a sigh of relief...for now.

UPDATE - Audiences delivered mixed verdicts in instant reaction measures: YouGov's scientific snap poll showed a draw. CNN's gave her a lopsided win. My gut tells me the former result is closer to the truth to the latter, but we'll see in follow-up polling. The Luntz focus group went for Trump; CNN's broke for Hillary (although a majority called it a draw). The good news for Trump in all of this is that there's less unanimity about who won -- or at least the scope of the win -- than after the first debate. The bad news is that he's still losing, and last night was not likely to shift much. The big question is whether Trump added many voters to his pile, which is what he sorely needs.

Milley Details Nancy Pelosi's Attempt to Take Over the Chain-of-Command
Townhall
Jen Psaki reiterates that Joe Biden never said that thing that he said *on video* about withdrawing troops from Afghanistan
Twitchy
Woman Who Started the Fawn Fire Is the Poster Child for Gavin Newsom's California
Redstate
Insanity Wrap: Jen Psaki Is the Stupidest Person in the World (Or Hopes You Are)
PJ Media