Before you point to the Drudge poll, or the Time poll, or trending hashtags, or any number of other pro-Trump indictors, let's define a few terms. The most reliable sort of polling data comes from scientific polling that is conducted in the field for days, using a random, representative sample of the subject group. When it comes to last night's presidential debate, we won't have solid data on this level until late this week, at the earliest. The next rung down on the ladder are quasi-scientific snap polls, which attempt to replicate in-depth scientific polling, but over a much shorter time period. They are less accurate, but at least make a concerted effort to approximate best practices. Then there are focus groups, selected by public opinion experts and media organizations to be generally representative of the demographic they're seeking to test. When these panels of undecided voters are convened, their thoughts can be insightful, but biases like dominant personality-driven groupthink can disproportionately slant the outcome.

Finally, there are online polls, which are statistically meaningless. They might be an indicator of enthusiasm, but they do not reflect empirical reality. With those clarifications in place, Donald Trump is unsurprisingly dominating in the online polls, as his enthusiastic supporters flood websites to click 'Trump wins.' That reflects both the tenacity of Trump's online army, as well as the intensity edge that he enjoys over Hillary Clinton, according to multiple scientific polls -- which could have an impact in November. The two focus groups I've seen, as I briefly mentioned this morning, sided with Hillary as last night's victor. Here's Frank Luntz's group giving their reactions to the forum, splitting roughly three-to-one for Hillary. The critical and disappointed comments from Trump-curious participants probably represent the biggest red flag for him:

CNN's Florida group was even less forgiving, breaking lopsidedly for her. And that brings us to those semi-scientific, albeit rushed, instant polling. CNN's gave Clinton a very clear win, nearly on the level of Romney/Obama round one in 2012. That strikes me as an overstatement of last night's margin. She won, but not in a massive blowout. PPP, a Democratic pollster, found a significantly closer split, 51-40. And here's YouGov's data, aligning more closely with the CNN numbers: 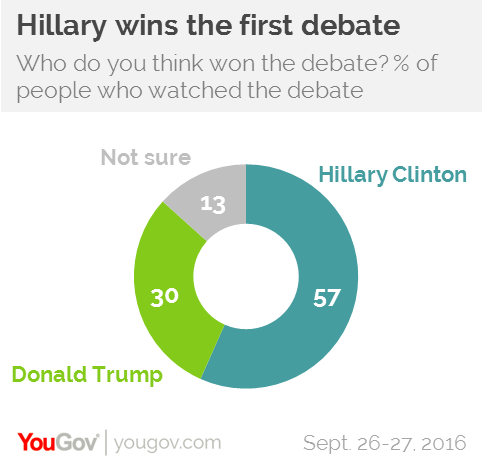 If you add up the "Trump won" faction with the undecideds, she still wins 54/43, which is pretty decisive. Click through for YouGov's internals, if you're interested -- which I'm not, given this style of polling.  I'm happy to wait until the next full round of proper scientific polling before rendering any confident judgment about the public opinion impact of the debate, but the meaningful early indicators confirm my analysis from last night: Hillary Clinton won the debate.  When you're complaining about the moderator (even if justifiably), and launching bizarre theories about your microphone, you probably didn't have a great night.  When your own surrogates aren't trying to pretend you won, you probably didn't have a great night.  And when you're proactively raising this 'oppo' hit -- unsolicited -- for some reason, you're probably not having a great morning after:

"She gained a massive amount of weight, and it was a real problem." —Trump just defended his attacks on Fmr. Miss Universe Alicia Machado. pic.twitter.com/HbVtaBpK3R

You can argue that this woman was required to maintain a certain weight under the terms of her contract, and that adults who participate in beauty pageants sign up with eyes open that their physical appearance will be under constant scrutiny.  You cannot credibly argue that "Miss Piggy" is a kind or respectful thing to call someone.  And it's impossible to defend the racial "Miss Housekeeping" moniker, which is probably why Trump avoided that element of this story when he brought it up on Fox & Friends today, perhaps prodded by Team Hillary's cringeworthy new web video:

This morning: "She gained a massive amount of weight...it was a real problem." pic.twitter.com/0wrISjJe6z

Is he trying to expand his gender gap?  I'll leave you with this: Beware of MSM 'fact checks' tallying misstatements from last night. They choose which comments to rate, and which to ignore.  For instance, on this list from NBC News, Clinton's lame and dishonest email scandal doesn't even get a mention.  She said she made a "mistake" (Trump rightly noted that her actions were deliberate), vowed to make "no excuses" (she's done nothing but make excuses, almost all of them bald-faced lies), and took "responsibility," (laughable, given her comprehensive lack of accountability) at every single stage of this mess.  None of that shows up here: