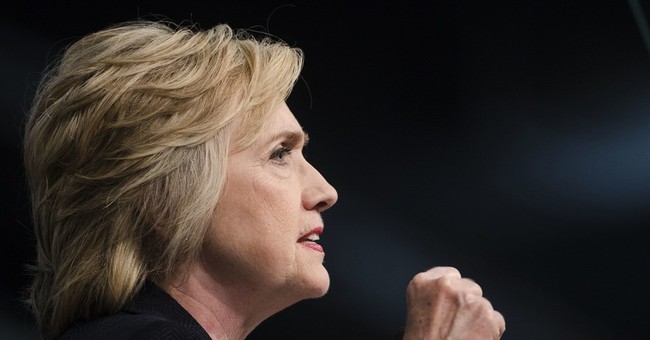 A new tracking poll from NBC News shows Hillary Clinton's general election lead over Donald Trump contracting slightly, as Leah mentioned this morning.  Her five-point edge has fallen to three points, a shift that's within the survey's margin of error.  This poll also marks the second set of national numbers released this week showing that a clear majority of voters believe she should have been indicted. The WaPo/ABC News poll pegged public disapproval of the 'no prosecution' decision at (35/56), while NBC has it in the same general ballpark:

One-in-five Hillary supporters believe she should have been indicted. These are people who are apparently among a sizable number of Americans who'd support a woman facing active criminal prosecution over the presumptive GOP nominee.  Fully 82 percent of respondents say Clinton's email conduct was inappropriate.  In addition to the to tightening of the race, the new poll also shows an erosion in Clinton's already-poor favorability rating.  She's now at (38/60), or 22 points underwater.  That's the good news for Donald Trump.  The bad news is that on the heels of Clinton enduring a bruising week of news in which she was publicly and unequivocally rebuked by the FBI over her reckless handling of her improper email scheme, her lead barely budged.  She was raked over the coals for her confirmed lies, and her unfavorability marks justifiably rose -- yet Trump's still remain worse.  Bloomberg is also out with new data gathered in July confirming a troubling trend for the Trump campaign; namely, that Clinton has opened up a significant lead among white voters with college degrees, a demographic captured by every GOP presidential nominee since 1956:

Trump is unlikely to outperform Mitt Romney with non-white voting groups, and although he will almost certainly fare better with working class whites, he can ill-afford to hemorrhage other white voters in the process.  Remember, Romney won the white vote by 20 points and still lost the election.  And the hits just keep on coming.  The Associated Press reports that Trump's RNC-furnished ground game (which was outsourced to the party because Trump simply hasn't mounted credible national operation) is lagging behind expectations.  Ground game matters, so these are red flags:

Presidential battleground states were supposed to be swarming with Republican Party workers by now. "We've moved on to thousands and thousands of employees," party chairman Reince Priebus declared in March, contrasting that with the GOP's late-blooming staffing four years earlier. "We are covering districts across this country in ways that we've never had before." That hasn't exactly happened, a state-by-state review conducted by The Associated Press has found. With early voting beginning in less than three months in some states, the review reveals that the national GOP has delivered only a fraction of the ground forces detailed in discussions with state leaders earlier in the year. And that is leaving anxious local officials waiting for reinforcements to keep pace with Democrat Hillary Clinton in the states that matter most in 2016...To be sure, the national party actually has notched record levels of fundraising over the past few years and put together a much more robust ground game than it had in 2012. But officials acknowledge the real competition isn't their past results or the chronically cash strapped Democratic Party. It's Clinton and what GOP party chairman Priebus calls "that machine" of Clinton fundraising. Some examples of Republican shortfalls: Ohio Republicans thought they were going to see 220 paid staffers by May; in reality there are about 50. Plans for Pennsylvania called for 190 paid staffers; there are about 60. Iowa's planned ground force of 66 by May actually numbers between 25 and 30. In Colorado, recent staff departures have left about two dozen employees, far short of the 80 that were to have been in place.

The negative assessment here is that the Democrats are out-working and out-spending Trump, allowing their unpopular candidate to maintain a consistent lead over the even more unpopular Democrat-turned-Republican. The positive spin is that despite her huge institutional advantages, Clinton isn't running away with this race. National and battleground polling points to a Hillary advantage, to be sure, but Trump remains within striking distance -- despite his well-documented structural shortcomings.  I'll leave you with two fresh data points.  Has Trump surged ahead in the swing state of Iowa in one poll, while sliding nationally?