Flashback: WH Required By Law to Disclose Every Word of Iran Deal to Congress 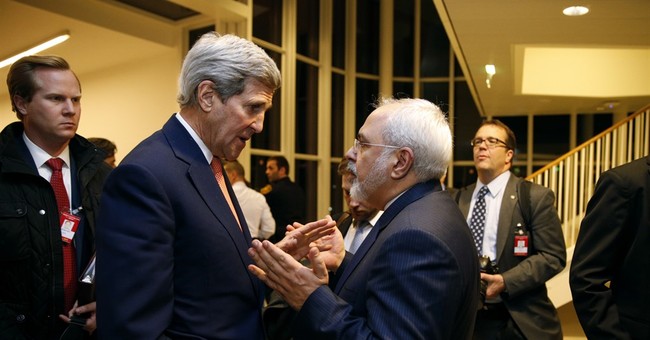 Remember when the Obama administration was getting pilloried over alleged secret side deals cut with the Iranian regime last year? Two Republican Congressional chairmen penned a letter to the White House demanding the full release of every single word of the deal -- pointedly reminding the president that he was legally required to do so, due to a law he'd signed himself. Here is what they wrote at the time:

For those of us who are elected officials, few votes will be more consequential than whether to approve or disapprove the nuclear agreement President Obama has reached with Iran. Yet the president expects Congress to cast this vote without the administration’s fully disclosing the contents of the deal to the American people. This is unacceptable and plainly violates the Iran Nuclear Agreement Review Act—a law the president signed only weeks ago. During a recent trip to Vienna to meet with the International Atomic Energy Agency, the organization charged with verifying Iran’s compliance, we learned that certain elements of this deal are—and will remain—secret.

Here is a news piece about the law they referenced, which passed the Senate 98-1.  That was roughly one year ago. And here we are today:

Key restrictions on Iran's nuclear program imposed under an internationally negotiated deal will start to ease years before the 15-year accord expires, advancing Tehran's ability to build a bomb even before the end of the pact, according to a document obtained Monday by The Associated Press. The confidential document is the only text linked to last year's deal between Iran and six foreign powers that hasn't been made public, although U.S. officials say members of Congress who expressed interest were briefed on its substance. It was given to the AP by a diplomat whose work has focused on Iran's nuclear program for more than a decade, and its authenticity was confirmed by another diplomat who possesses the same document. Both demanded anonymity because they were not authorized to share or discuss the document. The diplomat who shared the text with the AP described it as an add-on agreement to the nuclear deal in the form of a document submitted by Iran to the International Atomic Energy Agency outlining its plans to expand its uranium enrichment program after the first 10 years of the nuclear deal.

But while formally separate from the bigger nuclear accord, he said that it was in effect an integral part of that pact and had been approved by the U.S., Russia, China, Britain, France and Germany, the six powers that negotiated the deal with Tehran. Details published earlier outline most restraints on Iran's nuclear program meant to reduce the threat that Tehran will turn nuclear activities it says are peaceful to making weapons. But although some of the constraints extend for 15 years, documents in the public domain are short on details of what happens with Iran's most proliferation-prone nuclear activity — its uranium enrichment — beyond the first 10 years of the agreement. The document obtained by the AP fills in the gap. It says that as of January 2027 — 11 years after the deal was implemented — Iran will start replacing its mainstay centrifuges with thousands of advanced machines.

Defenders of the White House will latch onto two of those points.  First, they'll say that members of Congress who sought out details could be "briefed on its substance."  We'll discover how true that claim is, I'd imagine, but optional briefings are not the same as provision of the full text.  The law mandated that the Obama administration disseminate the "text of the agreement and all related materials and annexes" to Congress.  So wouldn't that verbiage undercut excuse number two, namely, that this was technically a separate document from the core accord itself?  This secret side agreement would seem to qualify as "related materials," no?  It's also worth recalling that Senate Democrats mounted multiple filibusters to prevent the United States Congress from voting up-or-down on a controversial nuclear deal forged with an avowed US enemy.  After pretending to demand a voice in the process, they eventually prioritized sparing President Obama the political pain of enduring a strong bipartisan repudiation of a heavily unpopular agreement.  We are now seeing the results of that partisan abdication on behalf of a reckless policy each day, with Iran's brazen conduct on full display.  President Obama and the UN Secretary General have both accused Tehran of repeatedly violating "the spirit" of the deal, but the US State Department doesn't seem remotely interested in evidence suggesting that the letter of the law has also been broken.  I'll leave you with Sen. Tom Cotton -- whose letter to the regime about the constitutionality of this accord still sends the Left into spasms of vitriol -- reacting to the news yesterday that (shock! surprise!), the Obama White House misled the country about the deal: