WH: The GOP Lied About the Iran Deal, So Our Embattled Spinmeister Won't Testify 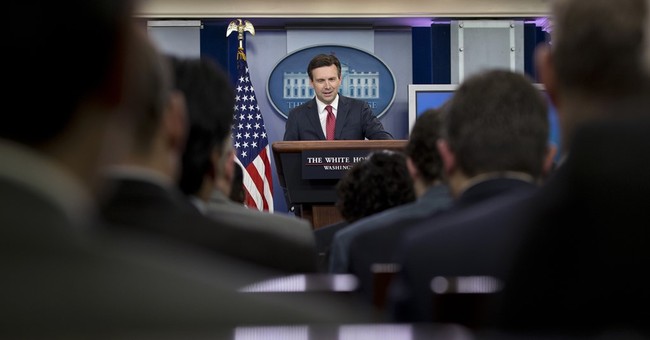 White House Spokesman Josh Earnest repeatedly ducked questions about whether presidential national security adviser Ben Rhodes should testify before a Congressional committee hearing exploring the controversial Iran nuclear deal on Tuesday, instead asserting that Rhodes is the one who told the truth about the agreement, whereas multiple Republicans repeatedly issued false statements on the subject. Rhodes has come under fire after the New York Times published a profile piece in which President Obama's 39-year-old "mind meld" confidante on foreign affairs -- an "aspiring novelist" who holds academic degrees in political science, English and creative writing -- boasts of actively manipulating America's 'know-nothing' press corps to repeat administration talking points about the unpopular nuclear gambit.  Writing in National Review, actual Iran nuclear expert Fred Fleitz (as opposed to a number of potemkin pop-up "experts" deployed by the White House and its allies during the administration's mendacious domestic sales job) cites the Times piece in flagging a core administration lie:

According to Samuels, the Obama administration was “actively misleading” Americans by claiming that the nuclear deal came about because of the rise in 2013 of a moderate faction in Iran, with the election of Iranian president Hassan Rouhani. Samuels says this claim was “largely manufactured” by Rhodes to sell the nuclear deal to the American people even though the “most meaningful part of the negotiations with Iran had begun in mid-2012.” Rhodes confirmed what most experts have long known: Rouhani did not represent the rise of a new moderate government in Iran. Supreme Leader Khamenei, a hard-liner, handpicked him to be on a slate of presidential candidates. Rouhani answers to Khamenei...the U.S. had made a major concession in May 2012 to allow Iran to continue to enrich uranium, and that this concession led to the November 2013 interim nuclear agreement with Iran. The White House made this concession before Rouhani won the July 2013 Iranian presidential election. Rhodes has now confirmed this. The Obama administration invented the moderate-Rouhani-faction story to create the illusion that it was taking advantage of a sudden opportunity to get a nuclear deal with a new moderate Iranian government.


Nevertheless, Earnest stated over and over again that Rhodes "told the truth" about the accord, unlike Republican (and Israeli) critics of the deal.  Watch:


Here, the White House's chief mouthpiece refuses to address the core question from Fox News' Kevin Corke, who suggests Rhodes' potential appearance before the House committee could be "instructive if not enlightening." In other words, if Rhodes' public assertions have all been vindicated, as Earnest insists, wouldn't it be useful for him to publicly respond to questions by proving how correct he was? Earnest won't answer that challenge, pivoting to his own talking point that GOP "liars" ought to be called before the committee to answer for their alleged untruths:

Earnest goes on to wonder aloud whether subjecting Rhodes to a grilling from "liars" would be "American." He singles out Arkansas Sen. Tom Cotton, whose sharp criticisms of the Iran deal enraged the Left, by quoting two supposedly untrue statements he made about the agreement. The first pertains to the dollar amount Iran is poised to receive in sanctions relief under the plan. That figure is under dispute, with the New York Times reporting that the true amount is "hard to measure." According to a 2015 article, "estimates of the sum that could become available to Iran range from $29 billion to as much as $150 billion." Administration officials have pegged the number on the lower end of the spectrum, while the Iranians are claiming a much higher sum.  Even if Cotton and others seized on an inflated number at the top end of the spectrum, does that constitute a confirmed "lie"?  The indisputable fact is that Iran's anti-American, terror-supporting regime is receiving a massive windfall of assets thanks to the agreement, money Obama himself has admitted could very well be used to further finance international terrorism.

Cotton's second "lie" involves correctly stating that the deal puts Iran "on a path" to become nuclear-armed in roughly a decade.  This is accurate.  Once the deal's Western-imposed restrictions (laden with concessions) begin to automatically sunset after a decade, Iran will become a threshold nuclear-armed state in very short order -- a reality that, again, Obama has effectively conceded.  That's the case the White House has against Cotton?  If he's such a liar, and Rhodes is such a truth-teller, shouldn't the administration be delighted to have their man take on the purveyors of fear and inaccuracies in an on-the-record setting? Based on his passion and command of details on these issues, I'd bet Sen. Cotton would be very happy to testify side-by-side with Rhodes.  Let's have an under-oath debate.  How 'bout it, tough guys?  Surprise:

WH to Chaffetz on request to have Ben Rhodes testify on Iran deal: We will not make Mr. Rhodes available to testify

The Obama administration's nuclear agreement with an enemy regime is packed with startling concessions, blazes a clear trail to an internationally-blessed nuclear program, ignores billowing red flags hoisted during negotiations, and has been greeted with a series of humiliating provocations by Iran following its (unofficial) implementation. It is also deeply unpopular with Americans, and was opposed by a large and bipartisan Congressional majority. Rather than answer for their arrogant exploitation of widespread ignorance and crafting of misleading narratives, the White House is shielding their man from facing questions from the people's representatives, lashing out and smearing at their detractors in the process.  GOP Senators, meanwhile, are calling for Rhodes to be fired.  Just last month, the president complained that Iran wasn't honoring "the spirit" of the deal, as Democrats have demanded a new look at sanctions related to the regime's multiple illegal long-range missile tests fired after the agreement went into effect.  Smart power.