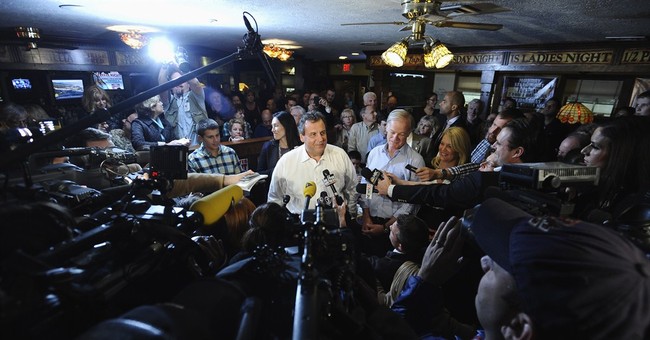 Three investigations, three vindications for Chris Christie.  The 'Bridgegate' scandal sucked up a preposterous amount of media oxygen last year, as Democrats and the press fixated on the closure of several lanes on the George Washington Bridge for a few days in September 2013.  What did the governor know, and when did he know it?  Christie immediately asserted that he had absolutely no knowledge of the hair-brained scheme, apologized for his administration's actions, and fired those responsible.  Here's what I said at the time:

Simple. If Christie cleans house & is telling the truth about his own knowledge, he's fine. If he's not being fully honest, he's in trouble.


Since that day, which touched off a months-long feeding frenzy that damaged Christie's political standing, three investigations were launched into the matter: The governor ordered an internal review (led by a team of former federal prosecutors), the US attorney's office probed whether any criminal charges might be warranted, and Democrats in Trenton appointed a stacked panel to investigate.  The latter commission, which was led by a prominent Christie opponent and hardcore partisan, would have liked nothing more than to nail the governor to the wall.  How did this triumverate of investigations turn out?  Christie's own probe confirmed his story, prompting howls of skepticism from critics.  Of course it cleared him.  The governor nevertheless predicted that its conclusions would "stand the test of time," acknowledging that it would be "tested by the other investigations that are ongoing."  And they have been.  NBC News reported in September that the federal inquiry had "uncovered no information he either knew in advance or directed the closure of traffic lanes on the George Washington Bridge."  The last, best hope for anti-Christie crusaders was the legislative review -- which wasn't gaining much traction, according to members of the panel on both sides of the aisle.  And now, this ballgame is over:

A report summarizing a yearlong investigation by the legislative panel examining the George Washington Bridge lane closures found no evidence of Governor Christie’s involvement but concluded that two of his allies acted “with perceived impunity” when they gridlocked Fort Lee’s streets apparently for political reasons. The committee’s 136-page report, drawing off sworn testimony, private interviews and thousands of subpoenaed documents, also highlights the unsuccessful efforts by a now-shuttered arm of Christie’s office to court the Fort Lee mayor’s endorsement, finding that the closures were “motivated in part by political considerations.” The report states there is “no conclusive evidence” as to whether the governor “was or was not” aware of the lane closures or involved in directing them...The governor’s office released a statement late Thursday in response to the report from the attorney it hired to conduct its own investigation. “The committee has finally acknowledged what we reported nine months ago — namely, that there is not a shred of evidence Governor Christie knew anything about the GWB lane realignment beforehand or that any current member of his staff was involved in that decision,” attorney Randy Mastro said. “Thus, the committee’s work has simply corroborated our comprehensive investigation. And with this inquiry behind it, the governor and his office can now focus on doing what they do best — serving the public interest.”


They looked at mountains of evidence and found nothing -- zip, nada, nothing -- that contradicted what Christie has said all along. The Bergen Record story on the findings, evidently written by distraught reporters, stretches hard to cast the big take-away as a potential negative for Christie because it "puts a spotlight" on the scandal.  Even exonerations are plugged into the "dark cloud" spin machine.  Sure, yet another report has backed Christie up, but the fact that we're even talking about this very serious scandal is bad news for him, or something.  Sure.  Thus, after more than a year of splashy headlines, ludicrous and discredited pile-on allegations, breathless cable news segments, pitiful New York Times scrounging, and late-night punchlines, 'Bridgegate' can officially be ruled a non-scandal as it pertains to the governor himself.  Members of his inner circle behaved reprehensibly, and Christie deserves some criticism on that front, but he dealt with them very decisively and told the truth.  Especially hard hit today is MSNBC, which covered this story with Watergate-level intensity until the facts started to disrupt their preferred narrative:


Conservatives in good standing are free to disagree on whether Chris Christie might be an acceptable or viable potential Republican presidential nominee.  He has certain strengths and flaws that he'd bring to the table, just like anybody else; that's a discussion for another day.  What should unite the Right today is a sense of satisfaction that a Democrat-media hit job on a Republican the Left obviously fears (for better or worse) has gone down in flames. On the merits, at least.  Perhaps they've extracted their intended political price, independent of the facts and outcome -- but at an absolute minimum, Christie now has an airtight comeback if and when the other side tries to batter him with the bridge story.  From a political standpoint, he's also beginning to pull together the strands of a comeback story, which even an ideologically hostile media can't resist.  I'll leave you with Christie being very Christie-ish in Canada yesterday (his, ahem, second international trip of the year), declining to announce whether he'll run for president on foreign soil.  He also strongly defended the Keystone Pipeline project:


UPDATE - The New York Times' headline on this report is almost virtuosic in its bias:  “Report Cites Gaps Between Records and Christie’s Comments on Bridge Lane Closings.”  Perfect.