With the midterm elections less than two weeks away, a new national poll from the Associated Press

features a parade of horribles for Democrats.  This is not where a party wants to be in the home stretch of an election campaign:

(1) President Obama's approval rating among likely voters is (41/60), marking his worst disapproval number in the series.  As the president has reminded voters in recent days, "every single one" of his policies are on the ballot in November, and vulnerable Democrats have been stalwart allies on behalf of his agenda in Washington. On issues, the president's numbers are egregious. (42/58) on the economy, healthcare and ISIS, (34/65) on immigration, and (38/62) on managing the federal government.  The only issue on which Obama is above water is same-sex marriage, at (50/49).  Obama's personal favorability is 10 points underwater (44/54) among likely voters. 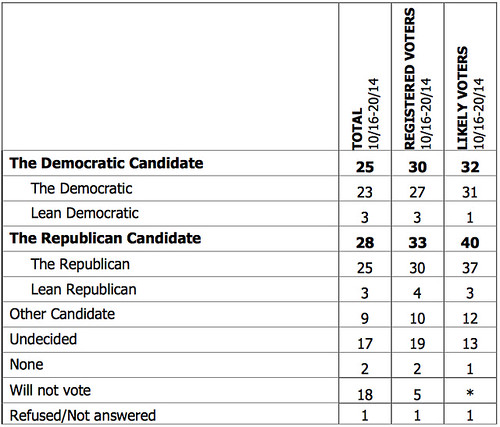 (3) "Which party would you rather see win control of Congress?" Likely voters: Republicans 47, Democrats 39.  Which party do you trust more on…


(4) The Republican Party's image is actually in less bad shape than the Democratic brand among likely voters, a rarity.  The latest Washington Post/ABC News poll also showed Democrats' image plunging to historic lows.  GOP favorability is underwater by "just" ten points in the AP survey, while Dems are upside-down by 15 points.  Fully 62 percent of likely voters describe themselves as dissatisfied or angry with the Obama administration.

Women have moved in the GOP’s direction since September. In last month’s AP-GfK poll, 47 percent of female likely voters said they favored a Democratic-controlled Congress while 40 percent wanted the Republicans to capture control. In the new poll, the two parties are about even among women, 44 percent prefer the Republicans, 42 percent the Democrats.


If only the president had done a few more fundraisers.  The White House is already laying the groundwork for damage control, the central pillar of which is blaming other people, of course.
Must Watch: McConnell Schools Democrats on Consequences of Their Endless Escalations in Judicial Wars
Guy Benson
Top Dems Urge Pence to 'Reconsider' Presiding Over Tonight's ACB Vote
Cortney O'Brien