Obama to Voters: Hell Yes, My Agenda is On the Ballot This Fall 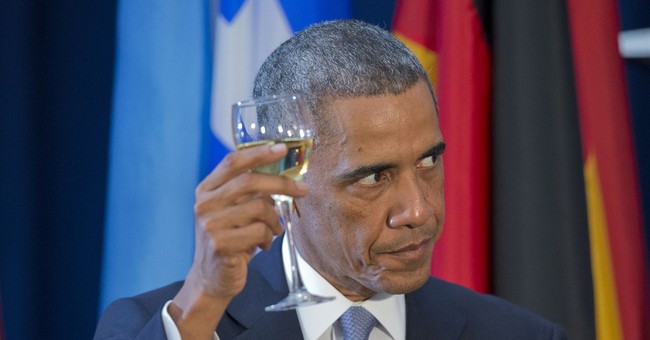 The Washington Post's Chris Cillizza pictures Democrats in tough races cringing as Obama presented an ornately wrapped gift to Republican ad-makers in his economic speech at Northwestern University on Thursday:


Indeed. And so are your steadfast rubber stamps, Mr. President.  Thanks for clarifying.  This braggadicio comes at time when O's approval ratings stand at a healthy (42/58) overall and (40/56) on the economy, among likely voters.  He touted Obamacare, telling the audience that despite what Fox News might tell them, Obamacare is working well in the real world.  Sound familiar?  Click through for a comprehensive destruction of that ridiculous talking point.  Ridiculous and unpersuasive, that is:


These policies will be on the ballot in November, guys.  "Every single one of them."  He also sounded this tired note, ignoring his own White House's record on the fake "equal pay for women" metric he insists on citing:

Like at the WH? RT @charliespiering: “It’s stupid," Obama says, referring to women who get paid less than men


This big pep talk also arrived on the same day that Democrats from Arkansas to Kentucky to Colorado were actively sprinting away from the Obama and Democratic brands.  (Really, Mark Pryor?  Do you think endorsing Chuck Schumer over Harry Reid for majority leader is some sort of life preserver in Arkansas?)  I'll leave you with the video of the man himself, followed by a choice clipping from the Associated Press' write up:


Obama laid claim to an economic recovery that he said has made steady progress, yet he conceded that many families have not benefited from lower unemployment, beefed-up corporate profits and a pumped-up stock market. Obama offered a lengthy defense of his policies, from bailing out the auto industry to his health care law, and he renewed his call for a higher minimum wage and equal pay legislation. He said that while he's not seeking election in November, "these policies are on the ballot, every single one of them."...In the AP-GfK poll, 4 in 10 approved of President Barack Obama's handling of the economy, generally unchanged since late last year. Likely voters give Republicans a narrow edge as the party more trusted to handle the economy, 36 percent to 31 percent who favor the Democrats' approach.


It's pretty simple, really.  If you believe Barack Obama's policies have been successful and that he needs more help in Washington to take the country further down its current path, vote for his party.  If not, vote Democrats out.  "Every single one of them."