Obama: Let's Face It, These Vulnerable Democrats Support Me and My Agenda 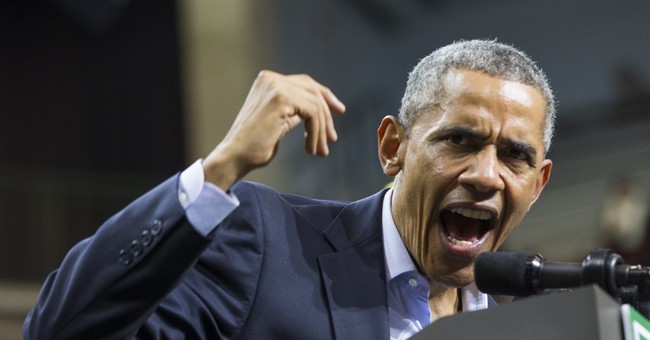 In which the President of the United States serves up another damaging soundbyte on a platter for national Republicans.  Several weeks ago, Barack Obama informed the nation that although he may not be on the ballot this fall, his policies most certainly are, in the persons of Democratic candidates.  That remark birthed a flurry of GOP ads warning (accurately) that a vote for Democrats is an endorsement of an unpopular president.  With two weeks remaining until election day, Obama expounded further on his political standing vis-a-vis vulnerable Democrats in an interview with Al Sharpton:


"The bottom line is, though, these are all folks who vote with me. They have supported my agenda in Congress, and they are on the right side [of issues]…these are folks who are strong allies and supporters of me."

Mary Katharine Ham jokes (?) that these blunt assertions are enough to drive endangered red- and purple-state Democrats to drink.  They've been contorting themselves into verbal pretzels trying to convince highly skeptical electorates that meaningful daylight exists between their 'independent-minded' candidacies and the Obama agenda.  But here's Obama swooping in during the campaign's homestretch to highlight the fact that every last one of them has voted with him, supported his agenda and served as a "strong ally" in Washington, DC.  The only way this clip could have been more valuable to Republicans is if the president had personally named every Democrat in a close race.  ("Kay Hagan is a strong ally and supporter of me!")  MKH also tries to make sense of Obama's stunningly maladroit comments, especially in light of his vaunted political acumen.  Her spitballed conclusion?  Between most of his party spurning his "help" for months, and dozens of Democratic partisans streaming out of his event in Maryland mid-speech, Obama is struggling to process some serious ego bruising.  And he's doing so publicly, in a way that is counter-productive to his longer-term interests.  On the House side, Democrats are engaged in defensive triage, trying to avoid surrendering more seats than they're already projected to lose.  In the Senate battle, National Journal's Josh Kraushaar surveys the late-game landscape and wonders if a true red wave is amassing.  Read the whole thing, as it's packed with interesting tidbits, including why the Georgia race remains so close, and why Iowa Democrats are feeling anxious about Bruce Braley's troubles at the top of the ticket.  RealClearPolitics' Tom Bevan summarizes Kraushaar's overall conclusion:

Per @HotlineJosh's column this am, GOP well positioned to win all 9 toss up races on this map. http://t.co/a0UWkQ7O5w


If you click through, you'll see the map to which he refers.  The nine 'toss-ups' include Alaska, Colorado, Georgia, Iowa, Kansas, Kentucky, Louisiana, New Hampshire and North Carolina.  Arkansas, by the way, has been relocated to the "leans Republican" pile -- joining South Dakota, West Virginia and Montana among the Democrat-held seats likely to flip into GOP hands this fall.  If Republicans managed to sweep the "toss-ups," with all else being equal, they'd net 10 seats.  That's…very bullish.  Though North Carolina has been trending toward Thom Tillis, Kay Hagan is still clinging to a tiny lead in that race. And while Scott Brown is certainly keeping things interesting, he's by no means the favorite in the Granite State.  Plus, none of those other races are 'gimmes' at this stage either, including several contests in which Democrats have at least a realistic shot of hooking a GOP-held seat into their column.  Eliminate North Carolina and New Hampshire from the "sweep," give Democrats, say, Kansas, and underperform in places like Colorado and Iowa, and Republicans could find themselves on the outside looking in when the Senate gavels back into session in early 2015.  But at this point, a serious red tide feels more likely than an implosion, especially with Obama gift-wrapping quotes that confirm the GOP's overriding message as the campaign winds down.  As it stands, the party's realistic Senate performance ranges from a gain of five seats to a gain of nine seats, net.  The likeliest outcome is somewhere in between, of course, and anything higher than five would slap Harry Reid with a demotion.