Townhall's 10 Most Popular Stories of 2018...Many of Which Star MSNBC 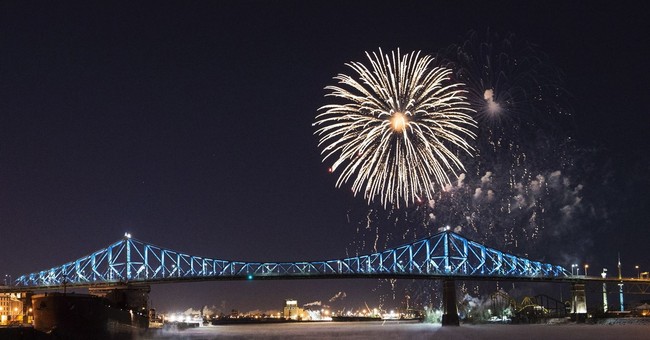 We've reached the end of 2018, which gives us a chance to look back at Townhall's most popular stories of the year. Here are the top ten!

MSNBC host Joe Scarborough admitted on air this past February that more young people are opposed to 20-week abortions and even identifying as pro-life thanks to advanced technology like ultrasounds.

"You are seeing poll numbers move on abortion for banning abortions after 20 weeks,” Scarborough said. “Why? Because for the past decade, younger Americans have been going in and they have been seeing 3-D imagery where they can look into the womb."

Scarborough is not exactly always in lockstep with the conservative movement, but he certainly got his share of applause after these comments.

9. Feinstein on Kavanaugh Accuser: 'I Can't Say That Everything Is Truthful'

Well, we knew at least one or two stories about the Brett Kavanaugh confirmation hearings would make the cut. Coming in at No. 9 was Sen. Dianne Feinstein's (D-CA) ridiculously candid revelation that Kavanaugh accuser Christine Blasey Ford's story may not be completely true.

"I can't say that everything is truthful," Feinstein told the press. "I don't know."

She eventually cleaned up her remarks to note that she believed Ford to be "sincere" and "credible."

Feinstein received a letter from Ford in July detailing a 30-year-old sexual assault allegation against Kavanaugh. The Supreme Court nominee denied the charges, but was forced to return to Capitol Hill in a second round of hearings to defend his honor. After a two-week battle, Kavanaugh earned a place on the high court.

8. Bill Clinton Defends Franken: It Was a 'Difficult Case' and the SNL Women Defended Him

Coming in at No. 8 is a foolish comment by former President Bill Clinton. Clinton, perhaps the last person who should be weighing in on this particular scandal, defended Sen. Al Franken (D-MN) after photos surfaced of him pretending to grope a woman during a USO tour. The woman, radio anchor Leann Tweeden, also claimed that Franken made other inappropriate advances toward her. He resigned as a result of the photos and allegations. Clinton called some of the charges a little "fantastic," before noting that some of Franken's former female "Saturday Night Live" costars support him.

"There may be things I don’t know," Clinton said. "But maybe I’m just an old-fashioned person, but it seemed to me that there were 29 women on ‘Saturday Night Live' that put out a statement for him, and that the first and most fantastic story was called, I believe, into question."

Keep in mind those comments were made shortly after Clinton said he did not owe Monica Lewinsky an apology.

7. Facepalm: MSNBC Host Isn't Sure if She's Out of Touch After Getting Filleted Over Bonus Remarks

MSNBC's Katy Tur shared the unpopular opinion of Nancy Pelosi this year that the bonuses borne out of the GOP tax reform were pretty insignificant. Working class families can't benefit much from a $1,000 bonus, she suggested on her Twitter page, particularly if they want to start a family.

Unsurprisingly, she received backlash for that elitist opinion. Tur then acknowledged that yes, those $1,000 bonuses are a big deal, but working class families should still demand more.

"Every dollar counts and $1,000 is a very big deal," Tur said. "But along with cheering one-time bonuses, shouldn't we be pushing for long-term salary hikes, the kind of sustained help that would transform big-ticket dreams into everyday realities?"

Her cleanup did little to stop the backlash. Didn't she learn anything from all the hecklers who showed up at Pelosi's town halls after she dismissed bonuses as "crumbs?"

6. Here's How a Liberal Father Whose Son Was Killed By an Illegal Alien Is Fighting CA's Sanctuary Law

Ten years ago, Don Rosenberg's son was killed by an illegal immigrant in a car accident. Although Mr. Rosenberg is a California liberal, this tragedy convinced him that his state's sanctuary laws were outrageous. He handed an urgent letter to then-Mayor of San Francisco Gavin Newsom's staff demanding they do something about the dangerous policies, specifically Newsom's decision to stop impounding cars of unlicensed drivers. After five years of silence from the mayor's office, Rosenberg is now heavily involved in a group called Fight Sanctuary State. He also led a Freedom of Information Act lawsuit against the FBI, the Federal Bureau of Prisons and the U.S. Department of Justice’s Office of Justice Programs to obtain crime statistics involving illegal immigrants.

"I’m trying to stop this from happening to other people,” the father said.

5. One Could Argue That Notorious Ruth Bader Ginsburg Totally Screwed Over Liberals on SCOTUS

Yes, another story related to the Supreme Court, clearly a hot button issue this year. Ruth Bader Ginsburg is a hero to the left, but this year some liberals may be wondering whether Notorious RBG would have done the movement the biggest service by stepping down during President Obama's term. Ginsburg's frail health is no secret. This past year the 85-year-old justice was sent to the hospital at least twice - first for a nasty fall, and then for a surgery to remove cancerous nodules from her lung. If her health forces her to resign during President Trump's presidency, he may have the chance to add a third conservative justice to the court.

Matt paints the potential liberal nightmare in this piece.

It’s very likely—at this point—that Trump wins a second term and could add another justice to the court with Ginsburg’s departure. Talk about a liberal meltdown: that’s a 6-3 conservative majority. If you want to see a thermonuclear explosion of outrage from the Left, when RBG leaves SCOTUS, Trump should nominate Amy Coney Barrett to fill the vacancy.

4. Oh, So That's What the DNC Tried to Bury During Trump's State of the Union

The Democratic National Committee's financial woes were a common theme for us throughout 2018, starting with the very surreptitious release of their debt and fundraising ratio at the beginning of the year. While all eyes were on President Trump as he delivered his State of the Union address, Democrats were hoping the following would go unnoticed.

Filed during the State of the Union in the hopes of getting buried, Ken Vogel of The New York Times picked it up where he noted the Democratic National Committee had raised a little over $5 million in December, finishing the year $6 million in debt. The Republican National Committee has no debt and raised over twice as much as the their Democratic counterparts. For 2017, the RNC raised $132.5 million to the DNC’s $65.9 million. Regarding cash on hand, the RNC has close to $40 million ($38.8 million to be exact), while the DNC only has $6.3 million.

Of course, the DNC would continue to consistently pace behind the RNC for several more months.

3. The Legal Advisor for Kavanaugh's Accuser Is a Big Time Democratic Donor, Thinks People Who Work for Trump Are 'Miscreants'

The scandal over Brett Kavanaugh returns to the list at spot No. 3. When Christine Blasey Ford's identity was revealed, so too was her counsel, Washington lawyer Debra Katz. Before long, media discovered that Katz had some anti-Trump bias and had donated thousands of dollars to top Democrats like Hillary Clinton, Barack Obama, and John Kerry. More troublesome, Katz seemed to have a history of dismissing charges against Democrats.

"Paula Jones' suit is very, very, very weak," Katz said at a later date on CNN. "She's alleged one incident that took place in a hotel room that, by her own testimony, lasted 10 to 12 minutes. She suffered no repercussions in the workplace."

2. MSNBC Host: Handgun Bullets Are Ineffective in Stopping School Shooters Because They're Too Slow

Do you sense a trend here? Another MSNBC host has made the list of top stories of the year, for yet another head scratching remark. The debate over whether or not to allow armed teachers in schools after the mass shooting at Marjory Stoneman Douglas High School last Valentine's Day. Individuals had sound reasons for or against the idea. But, this take from Lawrence O'Donnell was lacking in rationality.

According to the MSNBC anchor, “a bullet fired from an AR-15 travels three times faster than one from a handgun…and yet the president and the NRA think giving teachers guns will stop a school shooter.”

Matt takes home the gold for the year's top story. All it took was another unfortunate opinion from MSNBC's Katy Tur, and a heck of a response from Ben Shapiro, editor-in-chief of Daily Wire. During one particular segment back in July, Tur asked her guests why we'd allow a conservative bend on the Supreme Court, considering America has become more progressive since 1776.

"Oh, the levels of stupid,” Shapiro said. “1776, the Constitution was not yet written, Number One. Number Two: If you believe that America has evolved beyond the Constitution, it has an amendment process. Also, we have legislatures that you can elect."

Shapiro added that liberals appear to want to try to interpret the Constitution "as poetry" and use the Supreme Court as "a super legislature as opposed to, you know, an actual judiciary that is using judgment instead of will, as per Alexander Hamilton in Federalist ’78."

"As for conservative legal philosophy, well, maybe when the liberal media brushes up on their history, we can have a discussion about that."