Oh, So That's What The DNC Tried to Bury During Trump's State Of The Union 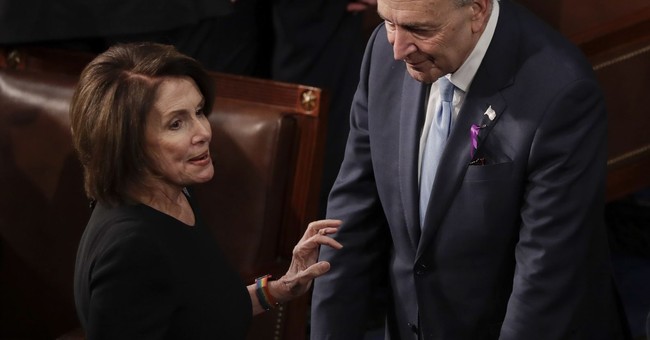 The economy is booming, the tax reform package has spurred over 250 companies to dole out bonuses to some three million workers, more employee investments are coming, more jobs are projected to be created, and charitable donations are expected to increase from companies thanks to Trump’s tax bill. Apple’s repatriation of $250 billion, part of their $350 billion investments back into America over a five-year periodis projected to create 20,000 jobs in the process. We've reached a new era, one of economic prosperity, which is what President Trump emphasized during the State of the Union Tuesday.

President Trump spoke of the good economic news to dead silence from Democrats. Job creation is up, with 2.4 million jobs created since the 2016 election—Democrats sat. They sat when the president announced we had defeated ISIS, touted low unemployment rates, fighting crime, uniting the country, and working together on a bipartisan basis. They were a legion of grumpy cats; still incensed that Donald Trump beat Hillary Clinton in 2016. Yeah, they’re not over it. Another area of heartburn could be the Democratic Party’s rather atrocious fundraising hauls. Filed during the State of the Union in the hopes of getting buried, Ken Vogel of The New York Times picked it up where he noted the Democratic National Committee had raised a little over $5 million in December, finishing the year $6 million in debt. The Republican National Committee has no debt and raised over twice as much as the their Democratic counterparts. For 2017, the RNC raised $132.5 million to the DNC’s $65.9 million. Regarding cash on hand, the RNC has close to $40 million ($38.8 million to be exact), while the DNC only has $6.3 million.

The DNC tried to bury their latest FEC #s tonight...

Yeah, I don’t blame Democrats for trying to use a highly televised event in an attempt to file and bury this report. It’s quite ugly.

Recommended
Liberals Know That Dragging Hillary Back Into the Fray After the FBI's Raid on Mar-a-Lago Isn't Good, Right?
Matt Vespa

On the other hand, as Katie wrote, the Republican National Committee not only had a great year, but a record breaking one. The RNC raised more money in an off year for either party. It’s an all-time high, whereas the DNC is pretty much on the verge of collapse. The GOP tax bill’s reception is getting better, with the legislation’s approval spiking and the generic ballot advantage for Democrats being chipped away with every passing day. The midterms might not be such a walk in the park if the good economic news continues to emanate from this administration’s policies.