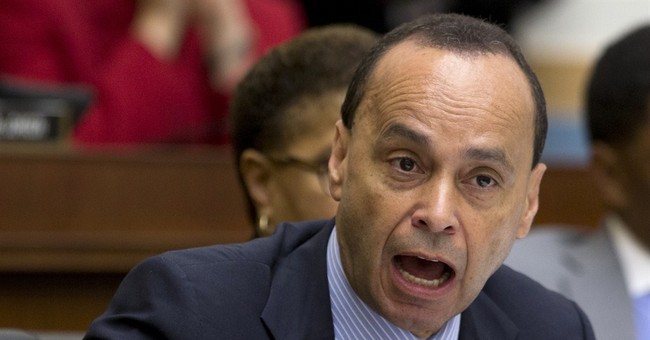 We barely had time to forget Rep. Luis Gutierrez's (D-IL) shameful attack on Chief of Staff John Kelly's military service, before he stuck his foot in his mouth again. President Trump released his new immigration demands Sunday night, informing Congress that any new deal must include funding for a border wall.

In exchange for an extension of the Deferred Action for Childhood Arrivals program, the president wants to see a a crackdown on sanctuary cities, thousands more Customs and Border Patrol agents and progress on the border wall.

As expected, Democratic leaders Chuck Schumer and Nancy Pelosi decried the proposal, telling the president that's not what they were promised. The reforms which he is insisting upon prove he is "not serious" about a compromise, they argue in a joint statement. In particular, they are confused over his border demands, considering they had an understanding that any immigration deal would not include border wall money.

“We told the President at our meeting that we were open to reasonable border security measures alongside the DREAM Act, but this list goes so far beyond what is reasonable," they say. "This proposal fails to represent any attempt at compromise."

Schumer and Pelosi's frustrated response was about right, but when Rep. Gutierrez added his voice, he took the criticism to a maddening, fever pitch level.

"It's an extension of the white supremacist agenda — what they want to do is criminalize and delegitimize Latinos," Gutierrez said in an interview Sunday following Trump's announcement.

The president has "never wavered from his xenophobic positions," Gutierrez added.

Any immigration deal needs at least 60 Senate votes. So far, bipartisanship seems out of reach.