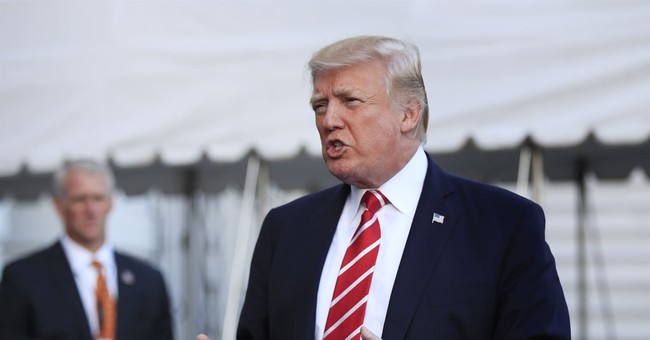 The Trump administration on Sunday called for a number of changes to the immigration system in exchange for an extension of the Deferred Action for Childhood Arrivals program.

Included in its “immigration principles and policies” paper, the administration requested a crackdown on sanctuary cities, 10,000 more Customs and Border Patrol agents, a reduction in the number of incoming refugees, and a merit-based system that limits chain migration, among other reforms.

"These findings outline reforms that must be included as part of any legislation addressing the status of Deferred Action for Childhood Arrivals (DACA) recipients," Trump said in a statement after the proposal was announced Sunday. "Without these reforms, illegal immigration and chain migration, which severely and unfairly burden American workers and taxpayers, will continue without end."

The plan also takes a hardline stance against unaccompanied minors who enter the country, advocating for the removal of the legal limitations, or what it calls “loopholes,” currently in place that prevent “Unaccompanied Alien Children” (UACs) from being deported from the U.S.

"These loopholes in current law create a dramatic pull factor for additional illegal immigration and in recent years, there has been a significant increase in the apprehensions of UACs at our southern border. Therefore, the Administration proposes amending current law to ensure the expeditious return of UACs and family units," a press release stated. (The Hill)

Attorney General Jeff Sessions argued the reforms will restore the rule of law.

“Unfortunately, over the last several decades respect for the rule of law has broken down and immigration enforcement has been sacrificed for the sake of political expediency. This has made us less secure and it cannot stand,” he said in a statement. “Now President Trump has put forth a series of proposals that will restore the rule of law to our immigration system, prioritize America’s safety and security, and end the lawlessness. These are reasonable proposals that will build on the early success of President Trump’s leadership. This plan will work. If followed it will produce an immigration system with integrity and one in which we can take pride. Perhaps the best result will be that unlawful attempts to enter will continue their dramatic decline.”

Democrats have already said a number of the proposals will not be considered.

House Minority Leader Nancy Pelosi and Senate Minority Leader Chuck Schumer said the list of requests “goes so far beyond what is reasonable” and “fails to represent any attempt at compromise.”

“The Administration can’t be serious about compromise or helping the Dreamers if they begin with a list that is anathema to the Dreamers, to the immigrant community and to the vast majority of Americans,” they wrote in a joint statement.