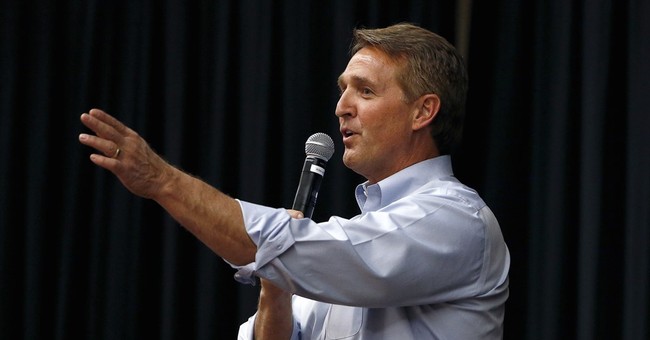 Then, the president followed up that semi-endorsement of Sen. Jeff Flake's (R-AZ) primary challenger with a public rebuke of Flake in his own state. No, he didn't mention Flake by name, but Trump did just about everything else to criticize the lawmaker on Tuesday night in Phoenix. That lawmaker who must not be named, the president emphasized, is "weak on borders."

Flake responded to Trump's critiques on "Fox & Friends." He told Brian Kilmeade that he was "glad" the president was in Arizona to address border security and he "looks forward" to working with him on it. However, he also noted that he has no regrets calling out the president.

And challenge the president he has. Not only did the Arizona senator accuse his colleagues of being complicit for not calling out the president's unorthodox tweeting, but Flake has also penned a book in which he describes how the 45th president has jeopardized the Republican Party's "principles."

The latest numbers are not good for Flake. Dr. Ward, who also once ran against Sen. John McCain, is outpacing him by 14 points.