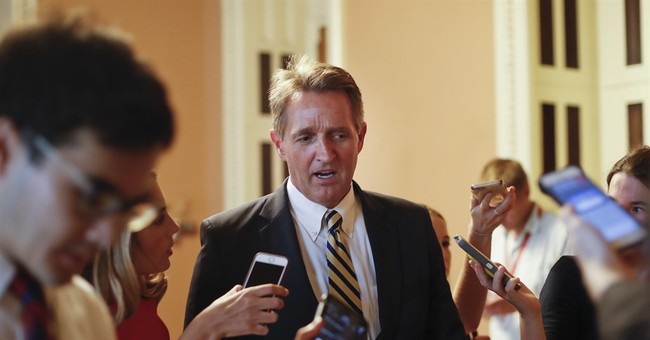 Arizona Sen. Jeff Flake is in trouble from all sides. With a dismal approval rating of 18 percent, he faces a primary challenge from former state Sen. Kelli Ward. At the federal level, President Trump torched Flake for being weak on borders, crime, and being a “non-factor” in the Senate. The president also called him toxic. In July, the Arizona senator’s vulnerabilities were highlighted by FiveThirtyEight, where the publication said it might not be a bad investment for Democrats to find someone to run against Flake since the state is shifting left, he’s never been popular, and he barely won in 2012.

Republican Sen. Jeff Flake of Arizona is unpopular — really unpopular. According to a poll about all 100 senators released Tuesday by Morning Consult, just 37 percent of registered voters in Arizona approve of their junior senator, compared with 45 percent who disapprove.

The polling firm [Morning Consult] has consistently had Flake’s approval ratings at lower levels than those of many other senators. Other surveys have also generally found Flake to have a relatively low approval rating. Flake even commented on one of the surveys in 2013, saying: “Given the public’s dim view of Congress in general, that probably puts me somewhere just below pond scum.”

Flake struggled at the ballot box in his one Senate race. During his 2012 bid for this open seat, Flake beat Democrat Richard Carmona by just 3 points. His showing was the worst for a Republican Senate candidate in Arizona since 1988.

Flake may not even make it to the general election. He’s being challenged in the Republican primary by the very conservative former state Sen. Kelli Ward. Other Republicans may join the race. In the 2016 GOP Senate primary, Ward lost to McCain by only 11 points, which was the closest Senate primary he has ever had. And Flake’s voting record in the Senate is ideologically similar to McCain’s. Additionally, the limited polling conducted late last year and early this year has shown Flake tied or trailing Ward. I’m not sure I believe those numbers, but it’s not difficult to imagine that Republican voters in Arizona, who went for Trump by nearly 20 points in the 2016 presidential primary, would be upset with Flake for his tendency to go after Trump.

Roll Call has also noted Flake’s vulnerabilities. Now, a poll from HighGround shows Ward with a 14-point (42/28) lead over Flake. Yet, the polling firm also noted that anything can happen, given the volatile nature of Arizona politics, noting that former Gov. Jan Bewer had been able to erase such deficits in shorter periods of time:

Q. If the primary election for United States Senate were held today, would you vote for [Rotate] Jeff Flake or Kelli Ward?

Q. If the General Election for United States Senate were held today, would you vote for [Rotate] Jeff Flake or Kyrsten Sinema?

While Election Day may still be more than a year away, Senator Jeff Flake’s campaign has a lot of work to do to persuade Republican primary voters that his form of principled Republican conservatism can trump the nativist populism that is fueling Republican voters’ antipathy towards Washington insiders.These same Republicans still give the President a 74% approval rating in Arizona,” said Chuck Coughlin, President & CEO of HighGround Public Affairs, which conducted the poll.

The data clearly shows that a contentious primary fight would certainly strengthen the chances of the Democrats to pick up the seat in November of next year.  There is an opportunity for Congresswoman Sinema to take advantage of the uncertainty on the Republican side by jumping into the Senate race,” Coughlin remarked. “The question for the General Election comes down to if Congresswoman Sinema will be able to define herself first to an electorate that is largely unfamiliar with her, or if Republican third-party groups can define her in ways unacceptable to Arizona’s General Electorate.”

The survey showed that Sinema enjoys a 51% approval rating among voters in her Congressional district which is largely within the cities of Phoenix and Tempe, which are more progressive, urban areas of the State.

Although a 14-point margin is a sizeable gap for Senator Flake, Arizona is known for its volatility when it comes to statewide races. Politicos such as Governors Fife Symington and Jan Brewer have been able to successfully rally from greater margins in shorter periods of time.

I know, look at the sample size. It’s only 273 for the GOP primary. Usually 350 is needed for an accurate gauge of a congressional race, 600 for statewide, and at least 1,000 for a nationwide poll. Yet, National Journal’s Josh Kraushaar noted the methodology is sound. We do have a long way to go—and it seems Mr. Flake is deep in the well right now. He’s not isolated, however. The Senate Leadership Fund is already hitting Ward for her remarks about chemtrails a year ago.

And consistent with other polls showing Flake approval low, like the Morning Consult Senate survey.