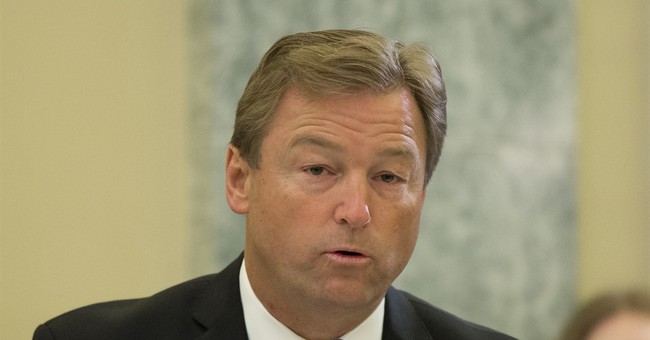 An assailant broke in to Sen. Dean Heller’s (R-NV) Nevada office Sunday morning. Noting was stolen, but the suspect taped a threatening note to the door.

A note taped to Sen. Dean Heller’s campaign office was from someone asserting that he would lose his health care if the key senator voted no and that he would die if that happened and would take Heller with him, a law enforcement source said.

Heller faces loads of pressure as a “pivotal swing vote” on the Better Care Reconciliation Act, The Nevada Independent explains. Yet, he remains on the fence because he, like a few moderate senators, are worried about the loss of Medicaid funding.

No policy battle justifies threats against our elected officials. Yet, the incident in Heller’s office now marks the third instance of a GOP senator being targeted in the past month. Earlier this month, a man with a history of mental illness made death threats against Sen. Joni Ernst (R-IA). He accused her of having ties to the Islamic State and said he could kill her. He added that everyone in government should be “killed off.” Then, a man in Tucson was arrested for telling one of Sen. Jeff Flake’s (R-AZ) staffers that liberals are "going to solve the Republican problem" with "better aim."

Of course, we can’t forget about the terrifying attack on Republicans at the congressional baseball practice in June. Rep. Steve Scalise (R-LA) is still fighting for his life at MedStar Washington Hospital Center after being shot in the hip.

In the wake of all these scary incidents, the Federal Election Commission ruled that lawmakers may now use campaign funds to pay for security upgrades at their personal homes, The Washington Post reports. Rep. Barry Loudermilk (R-GA) has also proposed legislation that allows members of Congress to carry firearms.