Howard Dean Doubles Down on Misinterpretation of First Amendment 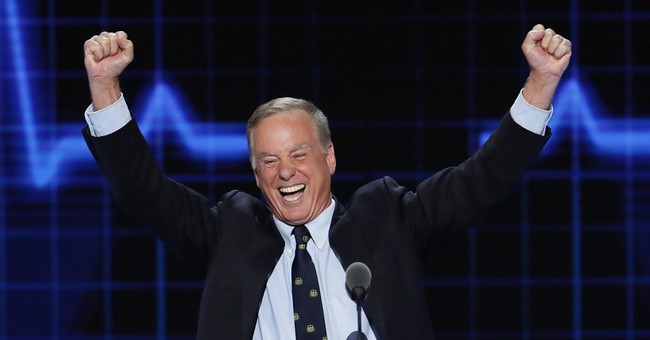 Former Vermont governor and Democratic presidential candidate Howard Dean offered his flawed interpretation of the First Amendment last week during the Ann Coulter-Berkeley controversy. The school cancelled Coulter's scheduled appearance on campus after they decided the conservative speaker would create too dangerous of an environment. They then re-invited her, but rescheduled her speech. Coulter insists she's coming on the original date - this Thursday.

Between all the back and forth, Dean defended Berkeley's initial decision to nix the speech, tweeting that "hate speech" is not protected by the Constitution. Putting aside the fact that Dean thinks conservatism amounts to hate speech, Guy explained just how wrong Dean was - not to mention hypocritical. Dean once joked that Trump peddled drugs.

Instead of admitting his mistake and saving face, Dean is doubling down on his ridiculous tweet.

"It's actually true" the First Amendment does not protect hate speech, he said on MSNBC Sunday.

Again, this constitutional scholar was a governor and ran for president.

Chuck Todd Tries to Pull 'A Vaccine Mandate is a Pro-Life Position' Argument Ahead of SCOTUS Hearing
Rebecca Downs
Matthew McConaughey Makes An Announcement on Whether or Not He Will Run for Governor of Texas
Rebecca Downs
So, It Looks Like CNN Did Not Learn The Same Lesson WaPo Had to with Tweeting About the Waukesha Tragedy
Rebecca Downs
Legal Experts Have Bad News for Civil Rights Suits Against Kyle Rittenhouse
Rebecca Downs
Dr. Francis Collins Spews Word Salad When Asked By Fox News Reporter About Case Numbers In Florida
Scott Morefield
Enes Kanter to Change Last Name to 'Freedom' as He Becomes U.S. Citizen
Landon Mion
CARTOONS | Bob Gorrell
View Cartoon
Most Popular