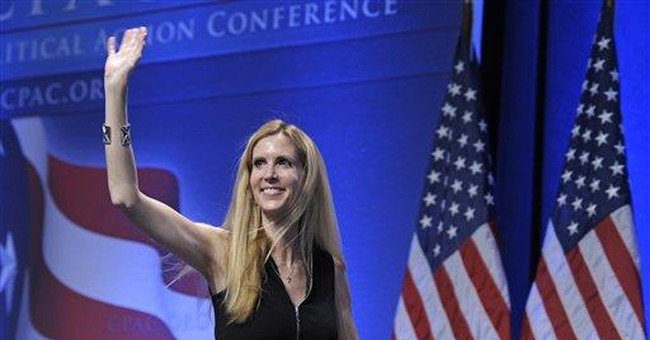 UC Berkeley is becoming less known for the their academics and more infamous for their riots.

The liberal college had to "cancel" yet another guest speaker because of safety concerns. The Berkeley College Republicans, BridgeCal and Young America's Foundation were planning on having Ann Coulter address their groups, until they received an email from the university's vice chancellors.

"We have been unable to find a safe and suitable venue for your planned April 27 event featuring Ann Coulter," vice chancellors Scott Biddy and Stephen Sutton emailed the student groups. “In the wake of events surrounding the planned appearance by (right-wing speaker) Milo Yiannopoulos in February, as well as several riots which have occurred in recent weeks in the city of Berkeley, we have increased our scrutiny regarding the time and location of high-profile speakers so that these events can go forward unimpeded.”

The university also requested that if Coulter should decide to still come to the campus, that they not disclose the location until closer to the event and only students would be allowed to attend. She agreed to the conditions but told the university she had her own conditions, as described on YAF's blog:

1) That the University of California chancellor request that the Oakland chief of police refrain from telling his men to stand down and ignore law-breaking by rioters attempting to shut down conservative speakers, as he has done in the past; and

2) That UC-Berkeley announce in advance that any students engaging in violence, mayhem or heckling to prevent an invited speaker from speaking would be expelled.

As Coulter explained, “If Berkeley wants to have free speech, it can have it.”

Last week, conservative speaker David Horowitz's speech was also canceled after UCB police told the student groups Horowitz's safety could not be ensured. The decision was made after the university instructed the group to hold the event during the middle of the day and on the outskirts of campus.

The Republican groups on Cal's campus feel the cancelation of conservative speakers is an infringement upon their First Amendment right to free speech.

Now the question becomes: will Berkeley ever do anything to ensure conservatives can come to the liberal hotbed without a riot ensuing?

My guess? It's probably not at the top of their priority list.

UPDATE: Coulter spoke with The Hollywood Reporter, telling them:

"Yes, it was officially banned," Coulter said of her planned April 27 appearance. "But they can't stop me. I'm an American. I have Constitutional rights."

Coulter had accepted an invitation from two campus groups — the Berkeley College Republicans and BridgeUSA — to deliver a speech about immigration, the topic of her last two books, both of which were New York Times bestsellers. "If that's banned, then no conservative can speak," Coulter told THR on Wednesday.

"Meanwhile, corrupt banana republic leaders like Vincente Fox have the red carpet rolled out for them on the taxpayer's dime." Fox, the former president of Mexico, spoke in Berkeley this week.