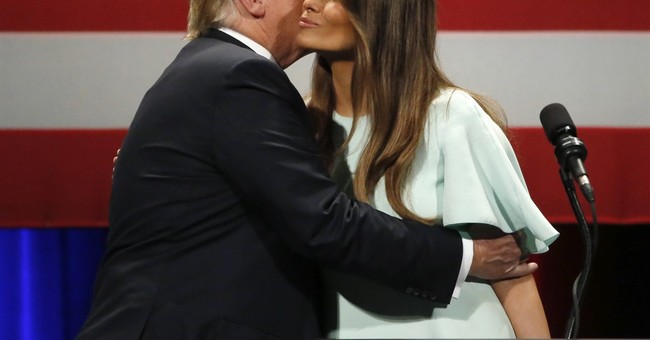 All eyes are on Wisconsin today. The prize includes 42 Republican delegates and 96 Democratic delegates. Democratic National Committee Chairwoman Debbie Wasserman Schultz continues to face pressure for appearing to block Bernie Sanders from gaining the nomination. Democratic voters upset with the paltry number of debates will be happy to hear CNN has announced it will host a new Democratic debate in Brooklyn, NY five days before the April 19 primary. There, Hillary Clinton will be forced to again explain why she can’t “shake” Sanders.

Donald Trump: Trump’s wife Melania spoke on behalf of her husband on the campaign trail Monday. Her rare remarks come after the media reported on Trump’s poor statistics with female voters. Seven out of 10 women have an unfavorable opinion of the businessman. Trump also tried to clarify his comment that women should be punished for having an abortion if the procedure became illegal, with his campaign explaining those performing the procedure should be the ones facing consequences. After a week of controversy, which also included battery charges for his campaign manager, Trump’s national lead has dropped three points. These aren’t exactly earth shattering numbers, but interesting should the downward trend continue.

Ted Cruz: Cruz is expected to win tonight in Wisconsin, considering he currently has a 10-point lead. His campaign released a list of over 15 legislators and 100 county chairs in the Badger State who have endorsed him ahead of the primary. He also received the endorsement of the National Right to Life.

John Kasich: Both Trump and Cruz want Kasich out of the race, but The Wall Street Journal is still fully supportive of his campaign.

Hillary Clinton doubled down on her controversial abortion comments in an appearance on “The View” Tuesday morning, where she insisted unborn babies have no rights under the Constitution. Her critics are also unhappy with her New York campaign, where she appears to be ignoring the needs of upstate voters and banking everything on New York City.

Bernie Sanders is a 70 percent favorite to win tonight in Wisconsin. A victory there would mean he’s won six of the last seven contests and will only add to his momentum and put more question marks on Clinton’s frontrunner status. Yet, all his efforts may be for naught, considering the super delegate process, which, as you can see, is heavily tilted in Clinton's favor.