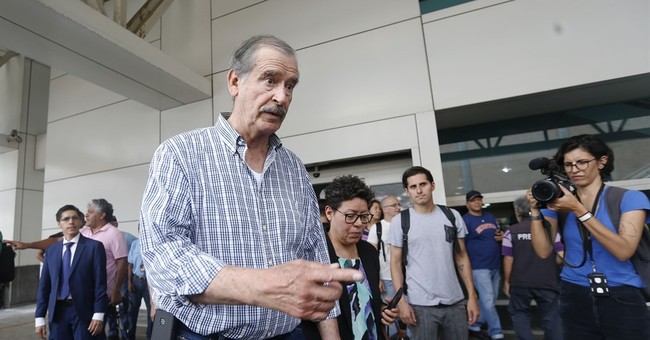 Former Mexican President Vicente Fox has been vocal about his opposition to President Donald Trump, and has been fairly flamboyant and uncensored about how he is very against the proposed border wall. Appearing on CNN's "New Day" on Friday, Fox said that Mexico "will never pay for that f-cking wall." The profanity aired on the network uncensored as it was being filmed live without a tape delay. CNN's Alisyn Camerota appeared visibly uncomfortable by the language, and apologized to viewers. Camerota joked that she should have agreed to a tape delay.

Former Mexican Pres Vicente Fox during live CNN segment today: “You can use my words—we’ll never pay for that fucking wall!"

Fox has been big on referring to the proposed border wall as the "f-cking wall" for quite a while, and it seems to be one of his catchphrases. But seriously, one would think/hope that the former leader of a country would be able to compose himself better on television and speak with appropriate language. As someone who is quite fond of profanity, there's a time and a place for it, and that time and place is definitely not on a live broadcast on national television.

Let's hope Fox watches his mouth the next time he's invited to appear on a television network--if that ever happens again.