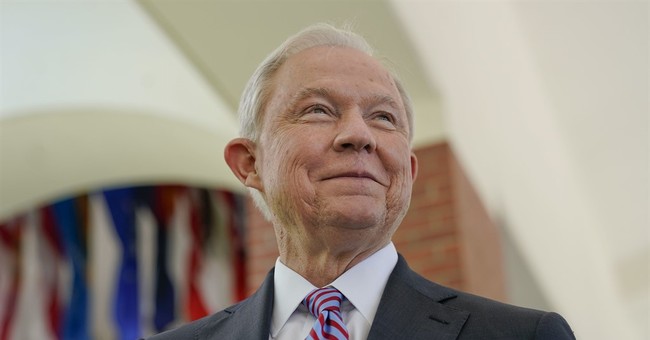 Attorney General Jeff Sessions told the Associated Press on Thursday that he'll be sticking around as attorney general as long as President Donald Trump wants him in the position, effectively dispelling rumors that he is going to resign.

BREAKING: Attorney General Jeff Sessions tells AP he will continue to serve as long as President Donald Trump wants him to.

Sessions and Trump have had a relatively frosty relationship ever since Trump trashed Sessions in an interview with The New York Times. Trump said that had he known Sessions planned on recusing himself from the Russia investigation, he never would have appointed him as attorney general. Since then, Sessions and Trump have reportedly not been on speaking terms, although Trump has repeatedly said that he has complete confidence in Sessions.

Granted, there's still the very real possibility that Trump could fire Sessions--but it looks as though he'll be staying put for now. Additionally, there's this bit of weirdness courtesy of Alabama's Mo Brooks, who suggested everyone just drop out so that Sessions can return to the Senate.

Guess this (incredibly weird) saga will continue for the time being. In the meantime, Sessions has announced new policies to combat sanctuary cities, as well as traveling to El Salvador in an effort to learn how to eradicate MS-13, a violent street gang.